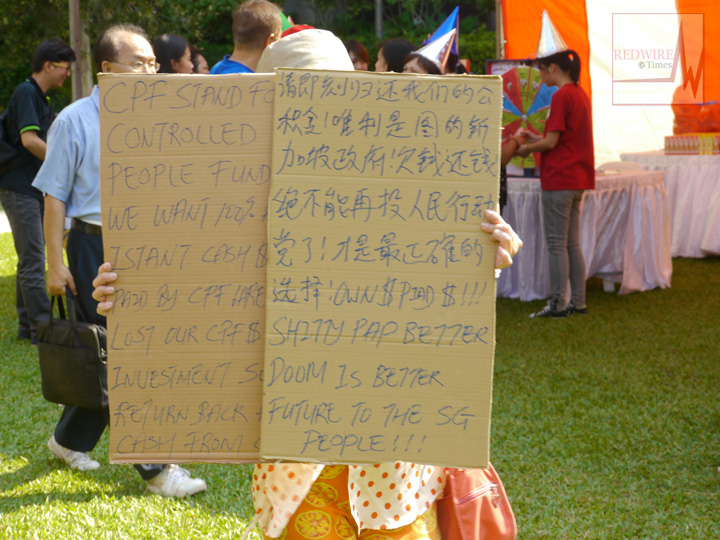 I was one of the protestors at HPL yesterday. I am sure what I have to say will be shouted down by those who don’t agree to what I saw. The contention in the limelight is that the protestors heckled the special needs children. The mainstream media have portrayed it so. The general public and whoever was present yesterday at the park or watches the video of the march in front of the stage where the special needs children were performing think so as well. It’s especially so when their parents and teachers witnessed the commotion just when their performance was about to start. It’s natural they will feel disturbed and the children feel intimidated.

To all those who only witnessed that particular part of the protest, the march in front of the children and then condemned it, I will say it’s only natural you reacted this way. I am fine with that. I too would have in your position. However, if you have the time, I would advise one to have an open mind and look at circumstances before and after the incident. Things aren’t that simple…

To say that we heckled the children, one has to be certain that that’s the intention of the protestors before the march. The truth is it required the group to take about 5 mins to march from where it started to reach the performing stage before the children started their performance. This means the leaders, Roy and Han HH, needed to know when the children’s performance would start. Ask any logical person whether the YMCA organisers would have informed them when the time would be?

If the answer is NO, then there’s no way Roy and Han HH would have known. If that’s the case, the intention to heckle is not valid. If the answer is YES, given that they were secretly informed, the march was participated by easily 1 to 2 hundred people. The majority of them were over 50 years old. What I want to know now is did all these people who followed the march have the heart and the intention to heckle these children knowingly? I will be the first to condemn them and myself if that is the truth.

As far as I know, the march was already planned before it took place. It wasn’t impromptu. If you have watched the video of the dialogue between Han HH and the NParks official, they did contend over where the march around the park would take place.

To me, the truth is it was most unfortunate that when the march reached the stage, the children were just about to start their performance. After stating the above facts, it’s now up to readers to believe whether we really wanted to heckle the children.

For those who didn’t know what happened before knowing the above facts, I hold no grudge. People don’t usually have the time to see further than what they read, hear or watch the news on TV. As I have participated in the march, I do sincerely apologise unreservedly for the fright done on the children. Had I known it beforehand, I would not have joined the march. For those who doubt my sincerity, I am old enough to face what you will throw at me. You have the right to comment on what you think of what I have said. Whatever it is, I have peace of mind.

They were very very quick to condemn others when others do wrong. They will hide and pretend not to know when things go wrong on their side. I understand and know their actions are for scoring political points. I hope these people can sleep well and have peace of mind too. Like what Roy said in his video after the marching incident, I too ask them to search their conscience.

This letter was written by Cytix.
Send us your letters at mail@redwiretime.com