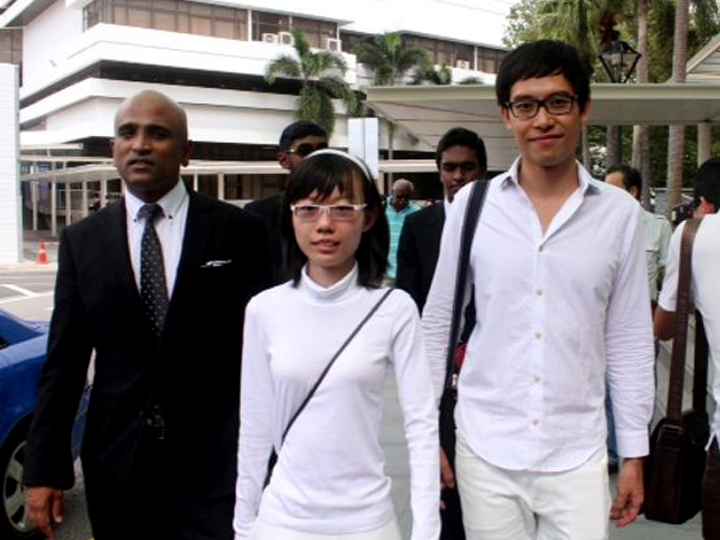 ANYHOWHANTAM: So the 3 day drama in the High Court ended (3 Jul) with Roy Ngerng doing what he does best, misleading and being insincere in offering his apology. Senior Counsel Davinder Singh underlined this, as this Channel News Asia report shows.

“As you were incurring these expenses and filing fees, you were aware that if you continued to aggravate the injury, there was a risk that the damages could be increased,” the Drew & Napier lawyer said. “The sensible thing to do was to stop aggravating.”

“He is continuing to attack the plaintiff (Mr Lee) for improper motives,” he told the court.

Roy had no qualms in misleading the public to donate to his ‘legal fund, yet in the end he blew all of that, not only gallivanting around the world’ but even taking funds from foreign sources. Only to come to court to again say ‘he’s sorry and had no intent to defame.’ In the end what did that $110,000 from 1200 donors achieve when he discharged his latest lawyer, George Hwang last week and defended himself with Ms Han Hui Hui appointed as his ‘co-counsel?’ Under misleading remarks of fighting for people’s CPF return, he took $110,000 which could have helped many of those very CPF members with debts or in dire need of them. He could have settled the matter very early on by agreeing to the demands in the letter and apologising unreservedly. He would have walked away with a ‘moral victory,’ made the PM to look like a big bully and then continued to fight for the people without a need to waste $110,000. In doing so, he now has made crowd-funding for those who really need it more difficult. Take a look at his advice to Amos Yee, who also crowd-funded $20,000, which also wasn’t required as his lawyers were doing his case pro-bono.

Simply put, Roy has no qualms in blowing away money and teaching others likewise on how to obtain it with misleading remarks and not coming clean. Some people ask me why I continue to attack him and the rest of the Looney Fringe – well this is why – lying and being untruthful. Until then, I was a fellow supporter – I was encouraging him and Ms Han, thinking they were doing it for selfless reasons – fighting for a cause, being true activists. It all changed when I found the ulterior motives and I first raised the alarm in this blog post on him seeking asylum.

Until today Han Hui Hui and Roy Ngerng are asking money from the public, if not from their personal pages then via their Empowering Singaporeans FB page. Both are working in tandem and in concert to deceive the public that they are ‘fighting for them,’ yet both have no qualms in going abroad and telling lies to their selected audiences. They want fame at all costs, yet do not work, do not go out to help the needy, rather chose to play ‘victim’ at every stage. Heaven forbid if they are elected – they’ll squander all the public funds they get their hands on and blame somebody else for it.

I was a bit lazy then to upload the Facebook messages between me and Ms Han, but now that the case is over in court, let me share them. Since then I’ve been proven right each and every time, the words and actions by them have shown them to be what they truly are – opportunists with misguided notions of self importance. Note these are not words by a casual observer – it’s by Ms Han, Roy’s very own right hand ‘woman.’ Her actions are done with his blessings and in concert with him. And so here they are in sequence:

1) Me chiding HHH for upping the ante with postings on her FB page. 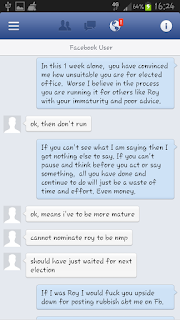 2) HHH claiming it was Roy who asked to up the ante. 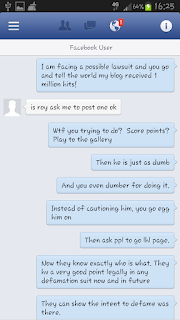 3) Buttressing the PM’s case of making the slander worse by aggravating it. 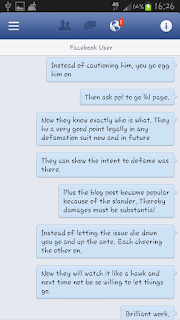 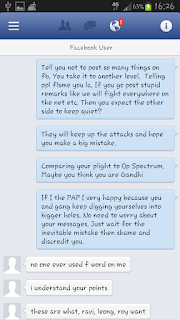 4) She claims that this is what Roy, Leong and Ravi wants. 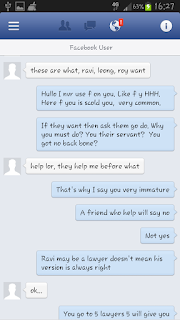 5) At that point of time, I was under the impression that his lawyer M Ravi was behind this too. I later found out (and confirmed by SC Singh) that Ravi was in the dark about all of this. 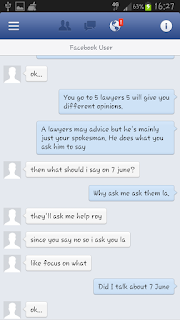 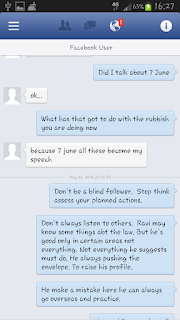 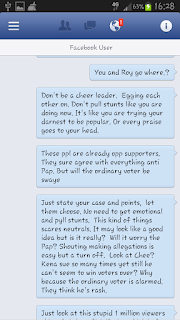 6) She  voluntarily mentions asylum the 1st time. I wasn’t taking it seriously then and made a joke about it. 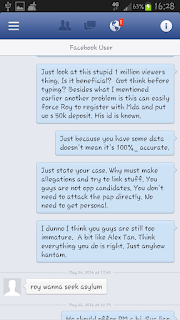 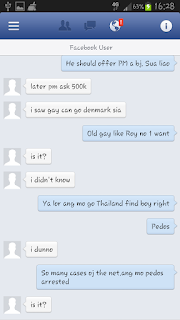 7) All this transpired before the Monday deadline, the earlier conversation took place on Saturday May 24th 2014. Thinking Roy was being badly advised, even by M Ravi, I volunteered to go meet him at Ravi’s office on Monday. 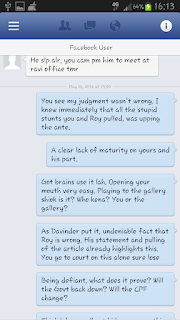 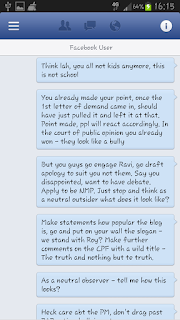 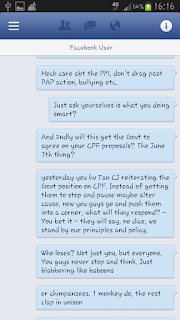 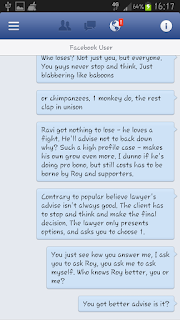 8) Then on Monday May 26th, SC Davinder sent a fresh notice rejecting Roy’s supposed ‘apology’ after it was revealed he not only made a new video but disseminated it (and the blog post he was to take down) to lots of people at home and abroad (as stated in the CNA article above).  I was angry at those actions and told Ms Han off. She responded by stating again voluntarily – he was doing this for asylum. 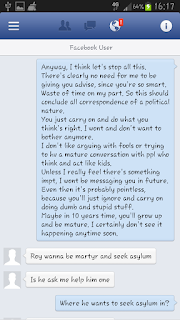 9) This time I took it more seriously and probed further and she explained: 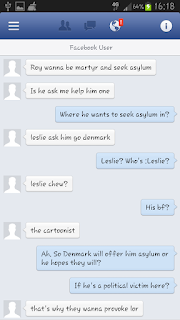 So there you have it – from the mouth of Roy’s best pal and confidant – his true intentions. Now before you say she’s making this up, do consider that at that point of time, we were friends – I genuinely believed that Roy and her were fighting for justice, they were passionate about the CPF issue, a bit misguided but their hearts were in the right place. Then this bombshell – all this was just a mere gimmick, telling the public and supporters 1 thing but doing another.

Of course since then Ms Han has either blocked me or closed this account in the hope it won’t come to light. Furthermore it shows here as Facebook user – so was it really her or me making this up? Fortunately I did a screenshot of this conversation where her name is shown. Here’s 2 examples: 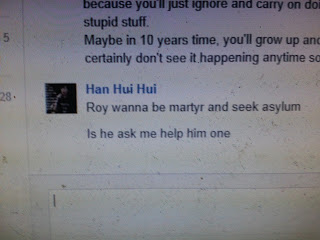 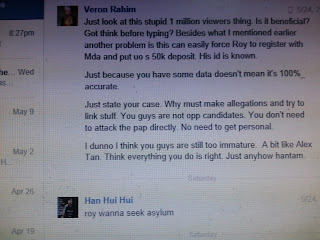 Proof from Points 6 & 7 above that it was Ms Han Hui Hui and no one else who volunteered this information on the motives of Roy Ngerng to aggravate the libel.

So Roy can go and deny in court and especially to his foreign supporters that he is being bullied and tormented. He can lie to hard-core opposition supporters that he’s being up front and truthful, but he cannot run away from the fact that his very own ‘co-counsel’ and best friend ‘let the cat out of the bag,’ that all he did was with an ulterior motive. He never had the interests at the people at heart as he claims even suggesting that he writes nothing but the truth in his blog – The Heart Truths. Rather his actions and flip flopping show a different side. He tells a different thing to each of his preferred audiences and conveniently blocks or ignores hard questions about his motives and actions.

In fact we needn’t go so far, at that point in time he had 1 of the best human rights lawyers around, M Ravi, to defend him. Why didn’t he just leave it to Ravi to handle Davinder Singh and the PM? Surely that’s the most logical thing to do when you face a letter of demand and potential lawsuit – leave it to your lawyers. Why do things without consulting him first? Why do things behind his back? Ravi would have complied with the terms laid out by Davinder and worded an apology to the PM’s liking and the matter would have been resolved there and then! He would walk away with a moral victory and could have continued to fight for the people he claims he wants to fight for. But that was never the case was it? No it was all about him and his self interests. It was to gain monies from unsuspecting followers. He’s no hero, he’s just a liar trying to trick unsuspecting people into believing he fights for them and wants to be rewarded with fame and money for his exploits, and possibly asylum. Of course he was too dumb to realise that no country would offer him asylum, so he tries to make himself the consummate victim, in the hope it’ll pay off eventually. And that’s why I termed him ‘The Looney Fringe.’ Anyway let me end with this warning I gave Ms Han then – again I was proven right.

This commentary was written Anyhow Hantam.
Send us your commentaries at mail@redwiretimes.com
Find us on Facebook! https://www.facebook.com/redwire.singapore