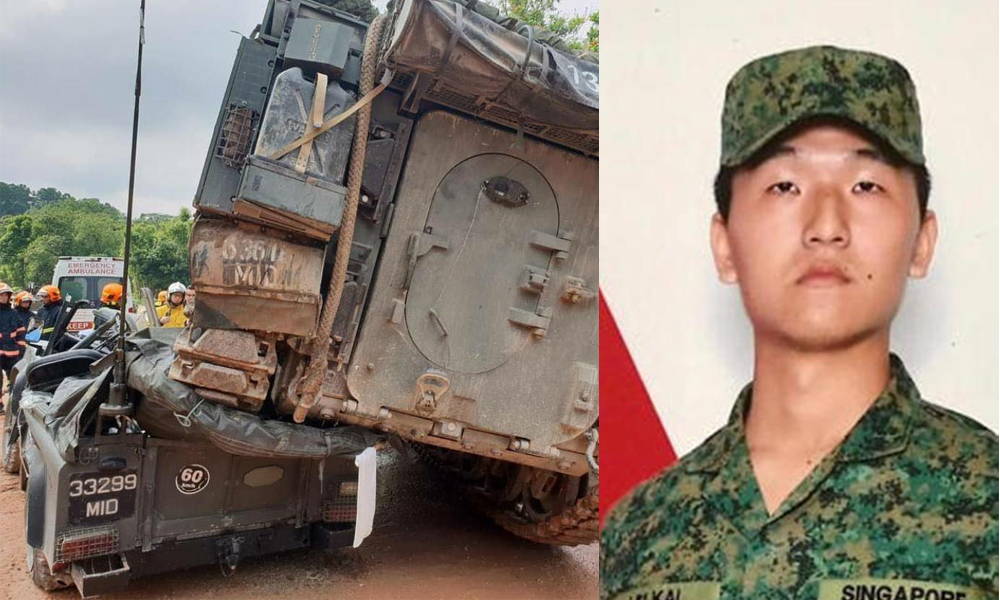 Commenting on the training incident on Saturday (3 Nov) which killed a full-time army national serviceman, army chief Brigadier-General Goh Si Hou said that any training death is one too many.

“Ultimately, safety is a commander’s responsibility in our army. Safety of our soldiers is my top-most priority as Chief of Army.”

Private Liu Kai, who has been posthumously promoted to Corporal First Class, was killed after a Bionix fighting vehicle reversed into the Land Rover he was driving.

The incident took place during a field training exercise in the Jalan Murai training area at about 10.30am.

CFC Liu’s death is the second Bionix-related incident in just over year in which a soldier was slain.

Third Sergeant Gavin Chan, a Vehicle Commander from the 41st Battalion Singapore Armoured Regiment, was killed during an overseas exercise in Australia in September last year when the Bionix tank he was commanding overturned on a steep embankment.

“We will take this opportunity to really re-look and make sure that all safety systems are in place, and not just for Bionix training.”

Police and the army are currently investigating the death of CFC Liu and an Committee of Inquiry has been set up to conduct independent investigations.

BG Goh, a SAF Overseas Scholarship and the President’s Scholarship recipient, started his career with the army in 1997 and was appointed Chief of Army in March this year.

Just a month after his appointment, CFC Dave Lee Han Xuan, a full-time national serviceman from the 1st Battalion Singapore Guards, died during training after succumbing to heat injuries.

A COI revealed gross lapses in training protocol which led to his death.