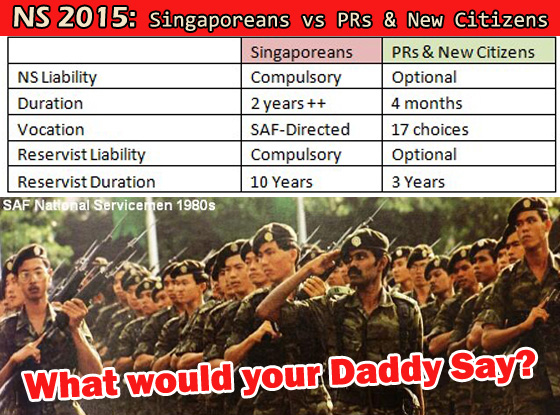 Daddies across Singapore would be up in arms.

First generation Permanent Residents, and new citizens can volunteer to serve National Service from tomorrow (13Oct), following a new initiative by the Singapore Armed Forces. They can choose to serve either a 4-month in-camp stint, or spread this out over several weekends. They’ll even be allowed to choose their National Service vocations. Women will also be allowed to volunteer. The first intake will commence next year.

It’s a good move by the SAF to engage our new citizens and PRs in national security, but the terms of the deal are simply an insult to Singaporeans. We’re forced to serve more than 2 years of NS. Some even have to give up prestigious overseas university scholarships because of inflexible army regulations. Yet the SAF bends when it comes to our new recruits, giving them so much flexibility. Spreading the 4-week stint “over weekends? This might as well be called SAF Club Med.

The SAF expects Singaporeans to sacrifice for their country, but says it shouldn’t tie down these fresh-from-the-oven locals because they “will not give their best”. It gives them a choice of vocation, but not Singaporeans. Is it possible that the powers that be believe Singaporeans can’t be trusted to choose the vocation that they can serve the best in, even though it might be the toughest? If true, that is an utter insult to born and bred citizens.

Square pegs rarely fit in round wholes, unless they come under a whole lot of pounding. New recruits can choose the vocations they believe they will excel in, and where does that leave our square-peg Singaporean men? Under their leadership of course. New citizens, doing a short-term stint, lording over full-fledged locals of 18 years and over — this just highlights who the SAF considers important in the overall scheme of things. Even if the new recruits can show our local sons a thing or two, how will this setup affect the morale, and the loyalty of our troops?

Shoot the scholars who came up with this new system. No, that would be an unnecessary waste of ammunition on undeserving dim bulbs. Rather, let’s praise them. Boys, this new initiative simply highlights how much your country values you, in comparison to someone fresh off the boat. Forget the patriotic national day messages. Forget the heartstring-tugging advertisements. Action speaks much louder than words. And the SAF has spoken.