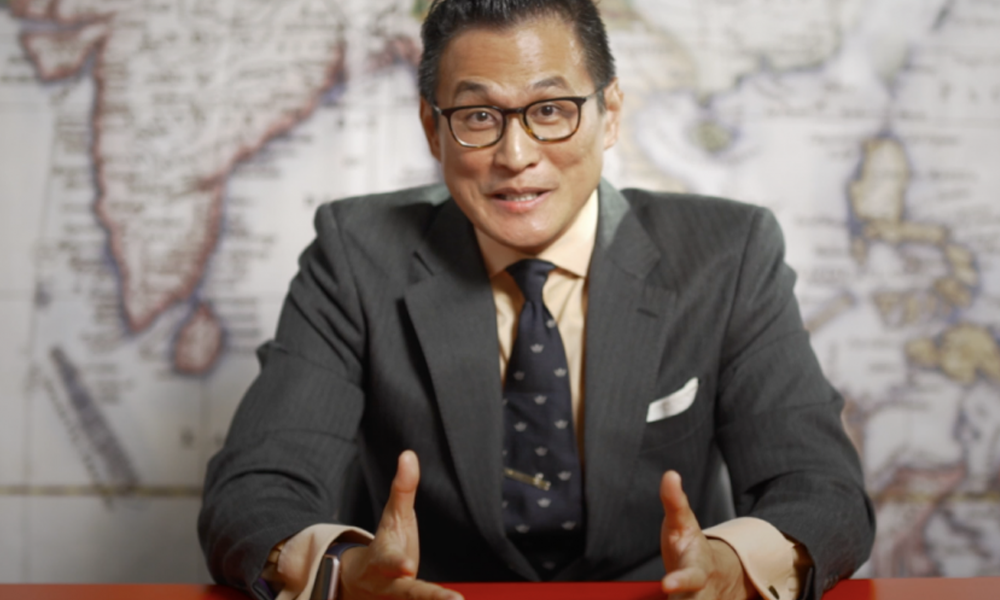 “There is clear source of ‘fake news’ which has spread falsehoods, with major impact, and hitherto escaped sanction. That is the politicians of Singapore’s People’s Action Party…”

Academic Dr Thum Ping Tjin, a Rhodes Scholar from the University of Oxford who also holds a Bachelor of Arts from Harvard University, has fingered the PAP government as the worst perpetrators of fake news in Singapore’s history.

Dr Thum, presently a Research Fellow in History and Coordinator of Project Southeast Asia at the University of Oxford, said this in his submission to the Select Committee on Deliberate Online Falsehoods, which was set up by Singapore’s PAP-led government to combat the spread of fake news.

“My submission to the Select Committee is based on my experience as an academic and member of civil society, as well as my involvement in facilitating dialogue sessions on the issue of “fake news” and “deliberate online falsehoods” in Singapore over the past two months. I co-facilitated three sessions, usually with about 15 to 20 participants per session. If required, I am willing to give evidence before the Committee.”

Dr Thum also condemned the government’s enhancements to the law to deal with fake news, saying the measures “further suggests that such remedies will involve actions which contravene the civil rights of Singaporeans.”

This is Dr Thum’s full submission:

Submission to the Select Committee on Deliberate Online Falsehoods, Parliament of Singapore

The definition of deliberate online falsehoods (or “fake news”) is extremely ambiguous. Sources are difficult to trace, difficult to prosecute, and domestic legislation will not stop foreign actors outside of Singapore. There is a surfeit of laws in Singapore which suppress free speech, and new legislation is not necessary as there is already existing legislation which can address “fake news”. Most of all, “fake news” has not, historically, had much of an impact in Singapore — with one major exception: the People’s Action Party government has, historically, spread “fake news” for narrow party-political gain. Given these problems, any solution to the problem of “fake news” must therefore start with the education of Singaporeans to be more skeptical of all information, regardless of source; the diversification of responsible news sources; and greater transparency in government and accountability for those in official positions.

Accordingly, the chief measures recommended to combat “fake news” are:

As a historian, I have been researching, writing, and publishing on Singapore history since 2006. I am also the founder, Managing Director, and Research Director of New Naratif, a platform for Southeast Asian journalism, research, art, and community-building.

My submission to the Select Committee is based on my experience as an academic and member of civil society, as well as my involvement in facilitating dialogue sessions on the issue of “fake news” and “deliberate online falsehoods” in Singapore over the past two months. I co-facilitated three sessions, usually with about 15 to 20 participants per session. If required, I am willing to give evidence before the Committee.

This submission is made in my personal capacity.

Falsehoods are part of human society and are common online and offline. The term “fake news”, however, has gained common currency across the world in the past year primarily due to U.S. President Donald Trump, whose election was allegedly aided by a Russian campaign to sow disinformation and fear among the American electorate. Trump himself adopted the term in his attacks on the American news media, accusing news which is unfavourable to him to be “fake news” while himself spreading stories which are demonstrably untrue.[1]

“Fake news” exists everywhere, but the circumstances in Singapore are unique to our local context. This submission outlines the issues surrounding “fake news” in Singapore and makes recommendations regarding how it should be addressed.

“Fake news” is impossible to define with any reasonable accuracy

a) Veracity: is this true?

b) Intent: Did the person knowingly spread falsehoods?

c) Impact: What was the result of the falsehoods being spread?

Yet the problems from all three quickly become apparent. The truth is subjective, with as many variants to a story as participants in it. Articles designed to inflame racial and religious tensions may still be factually accurate, but selectively present inflammatory facts while omitting more salient ones.

People may be duped into spreading falsehoods, particularly those designed to be sensationalist and to go viral. Also, intent is very difficult to evaluate and prove, especially when a person can easily forward a social media message without thinking.

Finally, a person may unknowingly spread fake news that results in widespread impact, or conversely may attempt to use fake news for malicious purposes, but utterly fail in doing so. “Impact” is a very vague concept, which is difficult to define and measure.

Sources are difficult to trace, difficult to prosecute, and domestic legislation will not stop foreign actors outside of Singapore

A further problem is the source. On the internet, it would be extremely difficult to trace “fake news” to its source, which can be easily concealed. If outside Singapore, it would not fall under the Singaporean legal jurisdiction. Thus far, the sole example of successful “fake news” is the Russian campaign, which appears to be a well-funded and well-coordinated action among a large group of people to sow disinformation and fear.

The success of the Russian campaign required a large, extensive, and well-funded campaign over the course of several months. It suggests that successful perpetrators of “fake news” would not be individuals, but foreign state actors and large organisations who can marshal the massive resources for a disinformation campaign. These would be near impossible to prosecute. They exist outside of Singapore’s legal jurisdiction and would require significant resources to pursue.

Item 81 of the Green Paper “Deliberate Online Falsehoods: Challenges and Implications” (Misc. 10 of 2018) states that, “It is important that such discourse and debate [on important issues] be open, and not be based on deliberate falsehoods. We should guard against developments that can undermine, discredit, or debase such debate and discourse.” Singapore does not suffer from a lack of laws to address online falsehoods. On the contrary, it is this excess of laws which undermine, discredit, or debase our debate and discourse. They have a negative impact on our ability to openly discuss important issues with maturity and honesty. If we wish discourse and debate to be open, then we should instead reform and/or repeal these laws.

There is already existing legislation which can address “fake news”

Clause 45 of The Telecommunications Act 1999 states that “Any person who transmits or causes to be transmitted a message which he knows to be false or fabricated shall be guilty of an offence…”. Addressing Parliament in April 2017, Minister of Law and Home Affairs K Shanmugam cited this law and acknowledged that the current law had remedies to deal with falsehoods, but argued that it was ineffective because is a “new age” where “the circulation of falsehoods can go viral very quickly today.”[2]

However, it is difficult to see how a new law can address “fake news” any faster without contravening the civil rights of Singaporeans and due process of the law. The recent proposal to amend the Films Act to permit any classification or licensing officer to enter premises without a warrant to conduct search and seizure on mere suspicion that a person is in possession of unlawful films (party political and obscene films) was already very troubling.[3] If it is indicative of how the “fake news” will be dealt with, then it further suggests that such remedies will involve actions which contravene the civil rights of Singaporeans.

Furthermore, we should not conflate virality with impact. The internet is rife with social media posts, hoaxes, and fake accounts, but these do not automatically translate into discernible outcomes in the offline world. To my knowledge, there are no examples of online “fake news” which have had a major impact on Singapore offline, to the extent suggested in the Green Paper (for example, affecting election results and causing riots or religious conflict), with one exception.

“Fake news” has not had much of an impact in Singapore, with one major exception

There is clear source of “fake news” which has spread falsehoods, with major impact, and hitherto escaped sanction. That is the politicians of Singapore’s People’s Action Party. The major examples of this are the numerous detentions under the Internal Security Act (ISA, and its predecessor, the Preservation of Public Security Ordinance) from 1963 to 1987. Beginning with Operation Coldstore in 1963, politicians have told Singaporeans that people were being detained without trial on national security grounds due to involvement with radical communist conspiracies to subvert the state. Declassified documents have proven this to be a lie. Operation Coldstore was conducted for political purposes, and there was no evidence that the detainees of Operation Coldstore were involved in any conspiracy to subvert the government. On the contrary, then-Prime Minister Lee Kuan Yew tacitly admitted to the British Commissioner in private meetings that the purpose of Operation Coldstore was political gain.[4] None of the approximately 2,500 people detained under the various clauses of the Internal Security Act between 1963 and 1987 were ever put on trial for the charges they were detained under. The Internal Security Department has never produced any evidence that any of its detainees were involved in any illegal conspiracy. The numerous detainees who continue to try to clear their names have been met either with denials or silence.

It is clear that politicians have abused their power by using the ISA to detain political opponents and cripple opposing political movements. The official statements that these were national security detentions designed to stop communist conspiracies is “fake news”: a major falsehood, for major political gain, which has destroyed the lives of many honest Singaporeans. Yet no politician has ever faced sanction for any of these falsehoods.

Given the above, the solution to “fake news” should therefore be to:

First, educate Singaporeans to be more thoughtful, critical, and skeptical towards information, regardless of source. This includes:

Second, constrain the ability of politicians to spread “fake news” and to increase transparency and accountability within the government. This would require:

[5] Under the National Heritage Board Act 1993, public records that are more than 25 years old can be designated as “Public Archives”. However, declassification is not automatic and is rarely done.

[Note: Shortly before I sent this in, it was pointed out to me that my section on existing legislation could be misconstrued as an endorsement of that legislation and how it was been hitherto used by the government of Singapore. I have amended that section, splitting it into two, to make my position clear.]