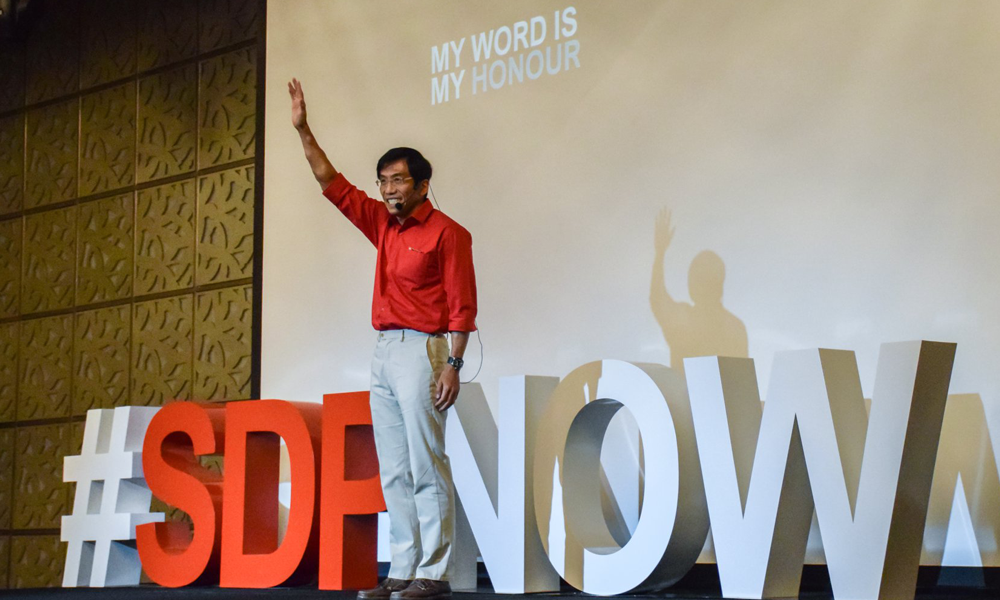 Singapore Democratic Party secretary-general Dr Chee Soon Juan said that the party will contest the same constituencies as it did in the 2015 General Election.

Speaking at the SDP’s election campaign launch on Saturday (23 Feb), Dr Chee said that what spurs the SDP to keep up the fight is the PAP’s refusal to change.

“They have hit us, thrown the kitchen sink at us, but we’ve stuck to our message, we’ve never wavered in our belief that rights come before riches, people before profit, wisdom before wealth.”

The next General Election must be held by 2021.

Barring any re-drawing of boundaries and challenges from other opposition parties, the SDP is expected to once again contest in 3 SMCs – Bukit Batok, Bukit Panjang and Yuhua – and 2 GRCs – Holland-Bukit Timah and Marsiling-Yew Tee.

Dr Chee also emphasised the importance of a “consolidated” opposition effort to topple the ruling party from its perch.

“The first step is to get everybody to sit at the same table and ask the question, ‘What are we trying to achieve?’ I want to encourage our opposition friends to think of what we are fighting for and work towards that end where we have that common value, that goal we want to achieve.”

Also speaking at the launch, SDP chairman Dr Paul Tambyah blasted the government for the relentless rise in cost of living in Singapore, and for the impending GST increase which he says will put a bigger burden on low-income earners.

“The GST is an extremely regressive tax, with no exemptions for essentials such as rice, medicine or baby products. In fact, we even have to pay GST on our water conservation tax. It’s a tax on a tax!”

Dr Tambyah said that that current crop of “elitist” government leaders refuses to take ownership of problems and account to the public for mistakes.

“What I am concerned about is no one takes responsibility or ownership of these disasters. They set up review committees, there are rapid reactions to beef up safety and security, but the blame always seems to fall on the low-rank individual rather than on a system or culture that doesn’t encourage critical thinking. This lack of accountability, however, is not a Singaporean characteristic. It is more a feature of the PAP leadership.”

Dr Tambyah added that having government leaders who are “intolerant of criticism of any kind” is dangerous.

“An insecure leadership that lives in a bubble, surrounded by people who tell them what they want to hear, is a recipe for disaster.”