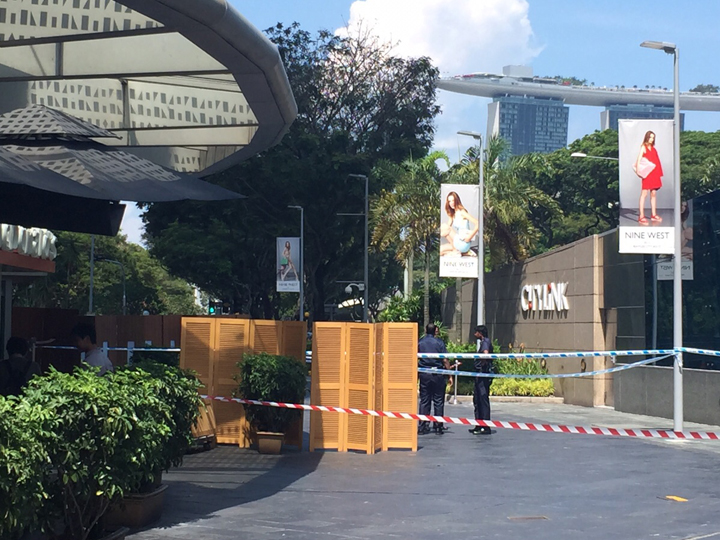 A shocker for mall-goers this afternoon, as a man fell to his death from Swissotel the Stamford.

His body landed between the hotel’s main entrance, and the entrance of the McDonald’s restaurant near Raffles City Shopping Centre.

SCDF was activated at 1.10pm, and paramedics who arrived at scene pronounced the man dead.

It’s unclear for now what caused the man’s death, but suicide is suspected.

Eyewitnesses say they heard a very loud noise when the body hit the ground, suggesting that the man fell from a great height.

One lady, Ms Li, a shop assistant in Raffles City Shopping Centre witnessed the incident, and was still visibly shaken an hour after.

“Of course scared lah. Suddenly there was this loud ‘boom’ sound. The scene was very disgusting. I just bought lunch back, after that don’t feel like eating.”

This latest Swissotel falling death comes just 5 days after an Austrlian woman was found dead on the parapet on the hotel’s second floor.

She reportedly fell from the 60th floor of the hotel, and is believed to have killed herself.

This is the 4th falling death to afflict Swissotel the Stamford in 4 years.

Swissotel’s management says it is reviewing the locking system of balconies in the rooms of the 73-storey hotel.

Currently, balconies are open by default, though guests can request to have them locked.