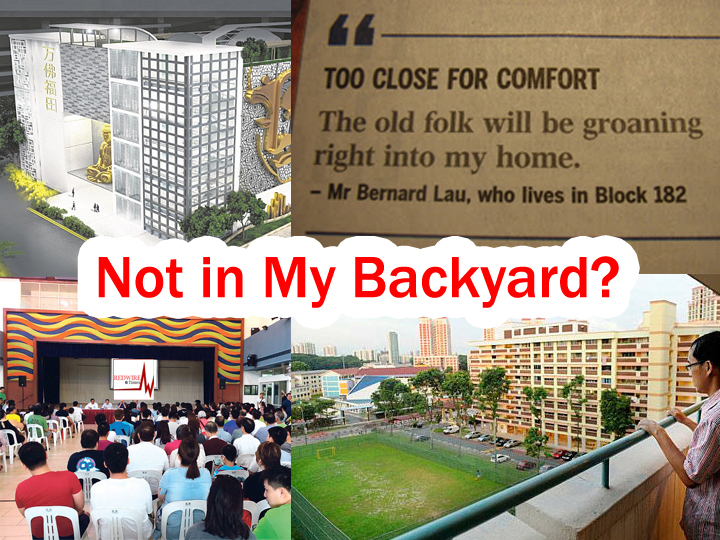 The furore over a planned columbarium at a Buddhist temple in Sengkanghas brought to light issues surrounding the Nimby syndrome in Singapore.

Nimby is short for “Not in My Back Yard” and applies to those residents who oppose plans for a certain development to be erected in their neighbourhood.

In the latest case, several residents of the future Fernvale Lea BTO project requested for refunds from the HDB as they “felt uncomfortable” and also concerned that the columbarium service may affect the resale values of their flats, media reports said.

You can read more about this story here.

This isn’t the first time Singaporeans have stood up against plans to build much needed facilities near their homes. Here is a look at four similar situations that made the news in 2012.

In May of that year, some 40 residents in Bishan signed a petition to stop building plans for a 260-bed nursing home on an empty field in Bishan Street 13. They cited the loss of their football field and how the new development would block the flow of fresh air into their homes as their reasons for opposing the project. Read more here.

In the same month, a group of residents in Upper Bukit Timah protested against the development of a condominium in a nearby forest that would yield more than 400 new homes. Some were worried that the tall buildings would block their views and endanger plant and animal life. Read more here.

Over at Toh Yi estate in Bukit Timah, several homeowners petitioned against the construction of studio units for the elderly on a small land parcel in the area. According to news reports in March 2012, the proposed development would be built over a jogging track and basketball court, which irked the group as they would lose their recreational facilities. They proposed building the apartments near another block, but residents living near the new site protested to have the units built elsewhere. Read more here.

4. Another case of Nimbyism came to light back in February 2012 when some residents in Woodlands objected to the construction of an eldercare centre in their void deck. They were worried the values of their flats would drop and there would be a lack of open space. Another concern was that more deaths and accidents could make it an inauspicious area. Read more here.

This commentary was written by Romesh Navaratnarajah.
Send us your commentaries at mail@redwiretimes.com