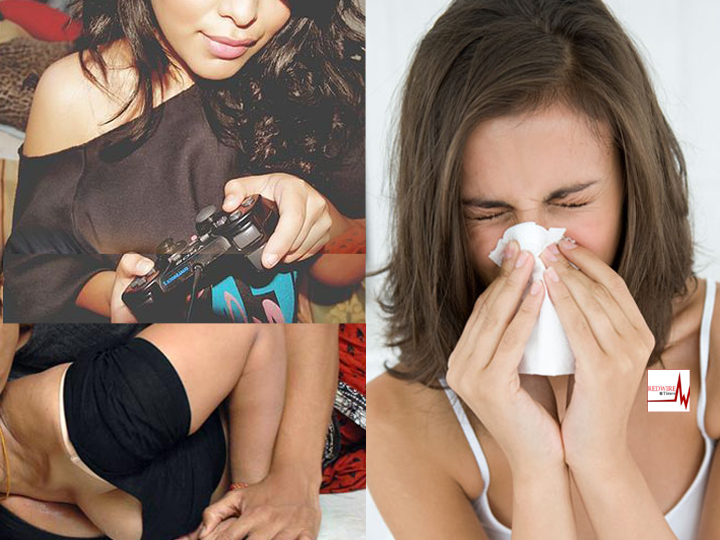 Human ingenuity knows no bounds when it comes to ways in which we can injure ourselves. Last month, doctors announced a modern plague called ‘text neck’.

This afflicts people who spend hours every day with their heads down, staring at their smartphones.

Dr Kenneth Hansraj, the chief of spine surgery at the New York Spine Surgery and Rehabilitation Medicine centre, says the sustained posture puts an unnatural load on the neck.

‘It may lead to early wear, tear, degeneration and possibly the need for surgery,’ he warns in the journal Surgical Technology International.

Over recent years, medics have amassed a mountain of other injury perils to make us fret. Here are some of the wildest and weirdest.

A vigorous snort into a hankie might clear your airways, but it could also fracture your skull or even traumatise the heart muscle. Doctors at Birmingham City Hospital reported how a 20-year-old woman blew her nose so hard that the pressure had blasted air through a crack in her skull, and found its way into her chest cavity. This had left her in agony, the medics wrote in the Journal of Laryngology & Otology. Fortunately, she recovered after rest and treatment with painkillers.

Last May, German doctors reported in the American Journal of Otolaryngology how a woman had her upper and lower right eyelids hugely puffed up with air after she had tried to clear her right nostril by blowing through it while blocking the left one with her finger.

And in July last year, doctors in Germany reported how a 69-year-old suffered a small rupture in the wall of his heart muscle by blowing his nose hard. The force had also caused a sudden rise in blood pressure, leaving him with stroke-like slurred speech and a paralysed right arm, says a report in the International Journal of General Medicine. The symptoms eased within hours.

This condition involves a complete loss of memory after vigorous lovemaking. A report in the Japanese Journal of Psychiatry and Neurolology in 1993 tells how one woman patient developed a sudden isolated bout of complete memory loss after having sex. She regained her memory after six hours.

One theory is that intercourse triggers a rise in blood pressure. This then drops rapidly, which can cause a temporary fall in the brain’s oxygen supply.

Love bites may seriously damage veins and nerves. In one particularly nasty case in 2011, a 44-year-old woman was left paralysed by a love bite which damaged a neck artery.

This peril was first identified by Finnish neurologists in 1980 who treated a young man for severe pain in his neck and shoulder. After a ‘rather vigorous’ love bite from his girlfriend, the victim took six months to fully recover from the resulting crushed nerve.

Even passionate kissing carries risks. In 2008, a young woman from Guangdong province in China lost her hearing in one ear for two months after a goodbye kiss from her boyfriend.

‘It reduced the pressure in the mouth, pulled the eardrum out and caused the breakdown of the ear,’ her doctor told the China Daily newspaper.

Surely making the bed can’t be that dangerous? Doctors have discovered otherwise. They warn how repeatedly trying to pull a fitted sheet over the corner of a mattress can cause blood clots. The continuous flexing movement of the wrist backwards and forwards results in a tiny clot in the main artery feeding the hand, causing numbness or weakness.

Francis Walker, a neurologist at the Wake Forest Baptist Medical Center, North Carolina, christened the condition ‘sheet-fitting palsy’ in 2012 in the journal Clinical Neuromuscular Disease. It has also been reported in basketball players and keep-fit fans who habitually do push-ups.

Hidradenitis is a skin disorder that generally causes small red, sore lumps on the skin and is thought to be linked to intense sweating. It has been previously found on the soles of the feet in people taking part in heavy physical activity, such as running. Now it has been discovered to afflict fans of computer games.

This problem was first identified by doctors at the Geneva University Hospital in Switzerland, who treated a 12-year-old girl for intensely painful sores on her palms. Investigations revealed that she had recently started to play a video game on a PlayStation console, holding a plastic control pad for several hours a day, and continued playing even after she developed the sores.

The doctors named the condition ‘PlayStation palmar hidradenitis’ and blamed tight, continuous grasping of the console, repeated pushing of the buttons and sweating caused by game-related tension.

Even massages may be a potential risk. In 2007, researchers at the Mayo Clinic in Arizona reported that a 38-year-old woman was left with permanent pain in her left arm after receiving a strong neck massage that damaged her spinal nerves.

Dr Edzard Ernst, formerly the professor of complementary medicine at the University of Exeter, says that there are at least 18 reported examples of ‘moderately severe’ reactions to normal massage, especially of the neck.

A related injury was reported by Michael Weintraub, of the New York Medical College, who examined five females taken to hospital suffering strokes after visiting the hairdresser.

The women, aged from 54 to 84, left the salons with a range of symptoms, from dizziness to partial paralysis.

Dr Weintraub believes arteries carrying blood to the brain were injured when their heads were stretched backwards over the salons’ sinks, creating a phenomenon he named ‘beauty-parlour palsy’.

But fans should be warned. A 63-year-old hula hooping enthusiast suffered a slipped disc in her spine, which had to be removed by emergency surgery. She was fortunate to recover without lasting nerve damage, the Chinese surgeons reported in the Kaohsiung Journal of Medical Sciences in December 2003.Similar cases were reported during the original craze in the 1950s, where participants suffered back spasms and ruptured abdominal muscles.

This story was adapted from the original, written by John Nash and first published in The Daily Mail.