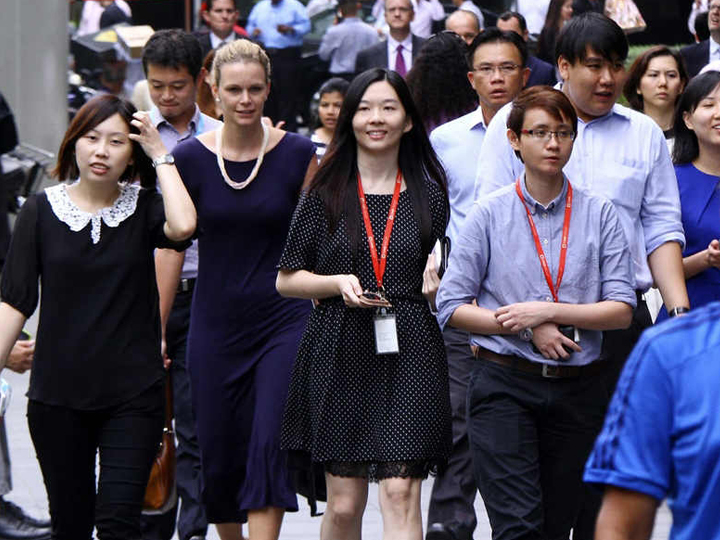 Employment law is one area of law that involves both public and private interests. Principles such as the sanctity and freedom of contract are engaged since the employer-employee relationship is normally contractual in nature. On the other hand, there may be concerns about the employment of illegal workers, child labour, workplace conditions and maternity needs that call for State intervention. Needless to say, the more the State intervenes – especially in areas where it ought not to – the bigger the Government; and vice versa.
One area that highlights the tension between private and public aspects of employment law lies in the area of anti-discrimination legislation. This is, unfortunately, an area not untouched by the culture wars on sexual rights, such as “sexual orientation”.
In a letter to the Straits Times, “Time for law against workplace discrimination” (3 February 2015), the Association of Women for Action and Research (AWARE) has clearly cast its vote in favour of bigger Government.
Programmes and Communications Senior Manager Jolene Tan wrote on behalf of AWARE:

IT MAY be time to consider enacting a comprehensive anti-discrimination law to guide employers’ conduct in hiring, promotion and other employment matters.

In Singapore, there is widespread agreement that opportunities for work and advancement should be equally available to all, regardless of race, religion, age, gender, sexual orientation, marital status, disability and so on.

Yet, practice does not always live up to this aspiration.

The recent incident involving a yogurt chain, which is said to have turned a candidate away on the basis of language, is not an isolated case (“Yogurt chain to raise hiring standards after shunning woman ‘for not speaking Mandarin’ “; ST Online, Jan 15).

It is common to see recruitment notices specifying unnecessary language requirements or even an outright preference for particular demographic groups.

The Association of Women for Action and Research regularly receives calls regarding workplace gender discrimination. Many involve discrimination against pregnant women.

The Employment Act offers some protection, but its coverage is limited. For instance, women have no recourse if, despite satisfactory performance, they receive a notice of termination immediately after their maternity leave.

While the Tripartite Alliance for Fair Employment Practices (Tafep) can initiate mediation, employees and job-seekers would have more certainty about their position and remedies if there existed a clear, binding legal obligation not to discriminate.

Employers would also have more incentive to behave fairly to begin with.

Workers should not have to hope for an online post to go viral in order for fairness to be proactively enforced.

The Government has taken a more interventionist approach in “naming and shaming” firms believed to have discriminated on the grounds of nationality.

Clearly, fairness cannot be left solely to the private market.

This recognition should extend to all forms of discrimination and constitute a fundamental legal principle in employment.

Tripartite Alliance for Fair Employment Practices
At the moment, workplace discrimination is handled by the Tripartite Alliance for Fair Employment Practices (TAFEP). Senior Parliamentary Secretary to the Acting Minister for Manpower, Mr Hawazi Daipi said in March 2014, explaining the position of the Ministry of Manpower (MOM) on anti-discrimination laws:

Let us come back to the issue of building better workplaces. Mr Hri Kumar asked if MOM will enact laws to prevent discriminatory workplace practices. This is a point that was also raised by Mr Zaqy Mohamad. The fundamental issue we are trying to address here is mindsets and attitudes. To deal with this today, we rely on TAFEP, the Tripartite Alliance for Fair Employment Practices. TAFEP was set up in 2006 to promote fair employment practices – to educate and persuade employers to recruit employees based on merit, treat them fairly, and reward them based on ability, performance, contributions and experience.

The experiences of other countries with legislation have shown that it remains difficult for victims to prove discrimination, and that they have suffered as a result. Legislation might also introduce labour market rigidity due to protracted disputes between employers and employees. These are complex issues that we need to address before we consider enacting legislation.

For now, we will continue with the promotional approach through TAFEP. To bring about change in mindsets and persuade companies to implement fair and merit-based employment practices. Mr Hri Kumar suggested a Labour Tribunal for resolving employment disputes quickly and at low cost. As Acting Minister Tan mentioned in his earlier speech, MOM is exploring an expeditious and affordable avenue for dispute resolution related to breaches of individual contract of employment. TAFEP’s example has shown that promotion and education is an effective tool in influencing change in the workplace. [Emphasis added]

The principle which guides TAFEP is that of meritocracy. According to the TAFEP website:

This means recruiting based on merit and being sensitive to your employee’s welfare. Do not use factors such as age, race, gender, religion, marital status and family responsibilities, or disability to decide whether or not to hire a person.

Notably, this is  different from AWARE’s list, which refers to “race, religion, age, gender, sexual orientation, marital status, disability and so on”.

“Sexual Orientation”?
Should “sexual orientation” be included in the list of protected categories?

The answer is yes and no, depending what one means by “sexual orientation” as well as the scope and nature of the job.

Firstly, “sexual orientation” is a malleable term which has been interpreted to include voluntary behaviours and not merely thoughts and inclinations. Professor John Finnis explained in his essay, “Law, Morality, and ‘Sexual Orientation'”:

[The] phrase “sexual orientation” is radically equivocal. Particularly as used by promoters of “gay rights,” it ambiguously assimilates two things which the standard modern position carefully distinguishes: (I) a psychological or psychosomatic disposition inwardly orienting one towards homosexual activity; (II) the deliberate decision so to orient one’s public behavior as to express or manifest one’s active interest in and endorsement of homosexual conduct and/or forms of life which presumptively involve such conduct.

Indeed, laws or proposed laws outlawing “discrimination based on sexual orientation” are always interpreted by “gay rights” movements as going far beyond discrimination based merely on (i) A’s belief that B is sexually attracted to persons of the same sex. Such movements interpret the phrase as extending full legal protection to (ii) public activities intended specifically to promote, procure, and facilitate homosexual conduct.

Strictly speaking, the first interpretation of “sexual orientation” as “a psychological or psychosomatic disposition inwardly orienting one towards homosexual activity” is quite uncontroversial for anyone committed to the intrinsic worth and dignity of every human being.
It is the second interpretation of “sexual orientation” that is problematic, and it is this interpretation that AWARE has adopted. In its letter to TODAY, “S377A ruling contradicts Govt position on equality” (17 November 2014), AWARE claimed that the reasoning of the Court of Appeal in its ruling on Section 377A of the Penal Code “throws into doubt Singapore’s compliance with its international legal obligations under the Convention for the Elimination of All Forms of Discrimination Against Women (CEDAW)”, referring to the statement by the Singapore Government before the CEDAW Committee that the Singapore Constitution guarantees equality “regardless of gender, sexual orientation and gender identity”. (See “Flogging a Dead Horse: AWARE outdoes itself yet again with Section 377A and the Constitution“)
Among the difficulties with the second interpretation of “sexual orientation” is its conflation of the person with the person’s conduct, behaviour or lifestyle. As noted in a previous post, an important distinction must first be made between persons and conduct. A person who has a homosexual orientation might not ever express that orientation in actions. By contrast, a person could engage in homosexual acts even if he has a heterosexual orientation.
Secondly, even if the second interpretation of “sexual orientation” were accepted, the scope and nature of the job may warrant differential treatment. The most obvious case where such differential treatment would be warranted is if the employer is a religious institution whose teachings and doctrines proscribe homosexual behaviour. Other examples may include groups or employers that place a high premium on the importance of the family, that is, “one man one woman, marrying, having children and bringing up children within that framework of a stable family unit.”
This is the view adopted by the National Council of Churches of Singapore, in its 2003 statement on homosexuality:

Though we deem homosexual lifestyle totally unacceptable on the basis of the Bible and our faith, we believe that unless there are legitimate reasons homosexuals, as individuals, should not be discriminated against in areas such as employment.

Therefore, if one were to take the latter interpretation of “sexual orientation”, as AWARE does, and to impose such non-discrimination legislation on all employers without exception, it would have serious implications throughout society. Finnis continues in “Law, Morality, and ‘Sexual Orientation'”:

So, while the standard position accepts that discrimination on the basis of type I dispositions is unjust, it judges that there are compelling reasons both to deny that such injustice would be appropriately remedied by laws against “discrimination based on sexual orientation,” and to hold that such a “remedy” would work significant discrimination and injustice against (and would indeed damage) families, associations, and institutions which have organized themselves to live out and transmit ideals of family life that include a high conception of the worth of truly conjugal sexual intercourse.

The State should respect the sanctity and freedom of contract, and refrain from interfering with the private decisions of employers and employees in such circumstances.
Is there, as AWARE claims, “widespread agreement” that “opportunities for work and advancement should be equally available to all, regardless of… sexual orientation”?
The answer is: Probably not.
While equality is a human right, forceful imposition of non-discrimination on the basis of sexual orientation is not.

Conclusion
Laws against workplace discrimination are perhaps necessary, and may already be on the road to progressive realisation through TAFEP. But legislation, of itself, can never be sufficient. An attempt to crack a nut with a sledgehammer may do more harm than good, bearing in mind potential effects of such legislation on the labour market. One must bear in mind the principles of a free market and the sanctity of private contracts, free from unnecessary intrusion by the State.

All Singapore citizens should oppose unjust discrimination. However, an employer’s decisions reasonably taking into account the behaviour of employees are core personnel decisions best left to businesses themselves, not to the government through the imposition of non-discrimination laws on the basis of “sexual orientation”. (See “Is discrimination on the basis of “sexual orientation” unconstitutional?” and “Article 12 and “Sexual Orientation”: Unclear, ambiguous and not unconstitutional“)
This story was first published on IONSG.
Send us your stories at mail@redwiretimes.com