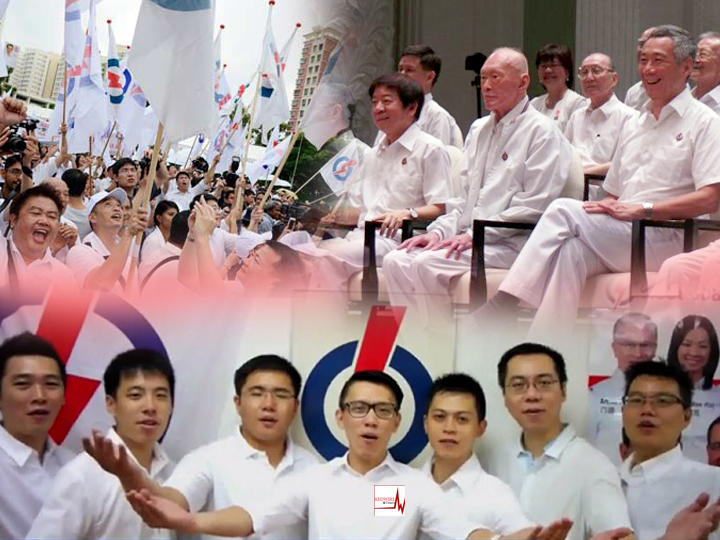 It’s SG50…so we thought it appropriate to give you 50 Reasons to Vote Against the PAP – if you believe in building a democratic society, based on justice, fairness and equality.

1. Use of GRCs to parachute unworthy candidates into Parliament.

2. Use of GRCs to deter Opposition from contesting in elections.

3. Attempts to censor and suppress socio-political discussion on the internet.

5. Rewarding themselves with million dollar salaries despite mediocre performance.

6. Network of cronies in civil service and GLCs.

7. Refusal to price new flats based on cost of construction to make them more affordable for citizens.

8. Cooptation of police and army by appointing useless and undeserved generals to political office and civil service agencies to buy their loyalty.

8. Twisting of history while denying opponents the right to air their views.

9. Refusal to move Elections Department out of the PMO to form a neutral and independent agency.

10. Politicizing the civil service to further its own partisan ends.

11. Control of the MSM to spread its propaganda and smear the Opposition.

12. Use of grassroots to sabotage duly elected MPs of the opposition party.

13. Refusal to admit to lapses in Bukit Batok rat infestation case despite clear evidence of negligence by Jurong Town Council.

14. Forced retention of the people’s money via CPF.

15. Rewarding foreigners scholarships to the tune of $210 million a year, while ignoring own citizens who have to apply for loans to study.

16. Reserving up to 20% of local university places for foreigners.

18. Using ISA to intimidate own citizens.

19. Refusal to hold an inquiry into wrongful detention and allegations of torture in Operation Spectrum.

23. Molly-coddling public transport companies by turning a blind eye to breakdowns and disruptions under 30 mins despite the massive inconvenience caused to commuters.

25. Condoning discriminatory hiring in foreign banks and MNCs by certain nationalities like foreign Indians at the expense of Singaporeans.

26. Refusal to implement minimum wage for the low income earners.

27. Refusal to set a poverty line under the ridiculous pretext that it will result in “cliff effect”.

28. Sabotaging the Workers’ Party by using PA to impose restrictions on community events.

29. Attempts to introduce self-censorship in the arts community with self-rating scheme.

30. Throwing $170 million at private companies to entice them to implement flexi-work scheme.

31. Timing improvements in public transport infrastructure to coincide with GE 2016.

32. Refusal to own up to ineffective protection of foreign workers who continue to suffer from shabby treatment from employers and live in substandard housing.

34. Wasting resources to create internet brigade to harass critics and sing praise of the PAP.

39. Setting up $2 company AIM to buy software from town councils on the cheap and leasing it back to the latter benefiting the company’s directors who are former PAP MPs.

40. Refusal to provide free medical for the lowest income earning strata of society.

41. Allowing PTOs to raise fares despite 40% drop in oil prices in the past year.

42. Sabotaging the Workers’ Party through the NEA by falsely accusing them of not cleaning the hawker centre ceiling and illegally holding trade fairs.

43. Lack of accountability among ministers who continue to draw sky high salaries in alternative posts despite many oversights.

45. Appointing useless PAP MPs to be in charge of sports associations, eg Nordin Zainuddin at FAS.

47. Refusing to disclose the value of Singapore’s reserves

48. Gerrymandering of electoral districts to ensure PAP has the upper hand.

Examples:
“Singaporeans’ spurs are not stuck to their hide” – LKY
http://ngm.nationalgeographic.com/print/2010/01/singapore/jacobson-text

50. Controlling the universities by not renewing the tenures of lecturers who are critical of the PAP (think: Cherian George).

This story was first published on The Alternative View.
Send us your stories at mail@redwiretimes.com