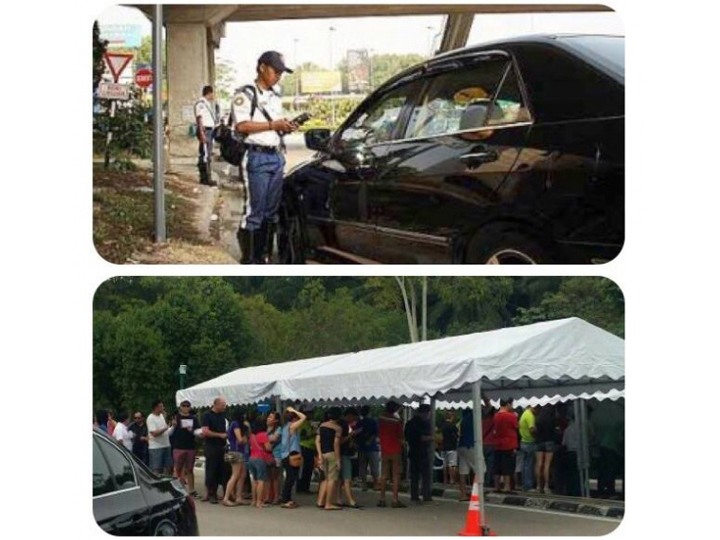 ANON: We were stopped by Malaysian highway police at the rest area just before second link (31Dec). Actually all Singapore cars were channelled into the rest area and stopped.

At the first gate, they did a cross checking of your car plate. Those with outstanding traffic offense were forced to stop and they took away your driving license, IC or passport.

You are to line up to obtain your outstanding offense list. We did and I was surprised to find that I have 3, with two of them in 2001 and 2004. I am always careful and I paid my traffic fines promptly. I challenged them and they asked me to go check out at their computer station. I went there and they could not produce. Officer there said 2001 and 2004 was too old. So I asked them to produce the one on Dec 31, 2012. They too could not produce. They simply strong arm and force you to pay.

I lined up to pay. There were 2 long lines. Some have more than 10 items. A guy had 7 or 8 pages and had more than 60 line items. Some poor guys had no money and they were frantic.

Those with copy of registration that indicates their date of purchase can have offense prior to that date being temporarily excused. They need to go to JB police station to have them permanently deleted.

As expected, when you paid your fine, they took away your original offense list. I took picture of the slip earlier and encouraged everyone around me to do likewise.

The European couple in front of me had 12 items, with 2 items on the same day, an hour apart. One from Batu Pahat and another from Seramban. She was puzzled as there was I way she could drive that distance in an hour.

As she was paying, 3 more line items came up. All there were from the same day, bearing the same time. They ignored their plea so the Caucasian couple paid M$2,250. The two guys in front of them paid many thousands. They got more than 60 line items!

The Caucasian couple told me that the police has been doing this for a week. They usually leave early and did not get caught. They only do this at second link as doing this at Causeway would cause a massive jam.

Send us your letters at mail@redwiretimes.com