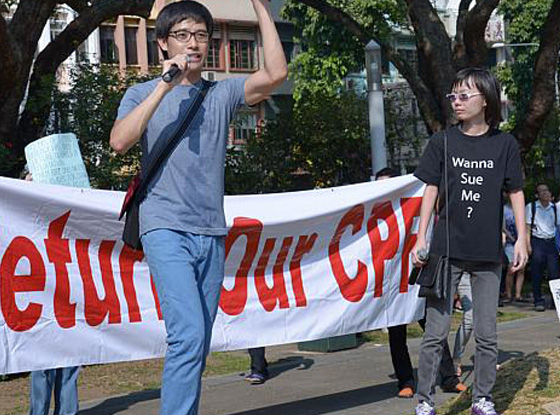 TSB: Han Hui Hui’s planned `Return Our CPF’ protest scheduled on 25 Oct 2014 was cancelled because Nparks, on the advice of the Police decided to revoke the permit. Subsequently, her lawyer M Ravi, wrote to Nparks asking for the permit to be re-instated citing that it was `a breach of our client’s rights of freedom of speech and assembly under Article 14 of the Constitution’.

M Ravi, being a lawyer, should know that freedom of speech or expression does not mean freedom from consequences. Unless you are placed in a straightjacket in a mental institution somewhere, you are technically free to do anything you want, including killing someone. But that does not mean that you will be absolved of any consequences deriving from your action. You cannot go to court and say that you are not guilty because you are exercising your freedom to kill the victim. In fact, even if you were found to be suffering from some mental condition such as acute bipolar disorder, you would still have to pay for your crime. To put it in another way, if everyone was free to do whatever they wanted, there would be no reason for heaven and hell.

We would suspect that she actually knew the consequences of her actions. In fact, she invited and hoped for the consequences to happen because it would validate her erroneous claim that the government is after the `small people’ and is a dictatorship. She was hoping to gain more credence and traction to her cause. You can only play the victim card if you are a victim and that is precisely what Han Hui Hui is trying to achieve. Make herself a victim.

And she has got nothing to lose because whatever fines that she has to pay will be borne through the donations of people who have grievances against government’s policies. And this leads us to suspect that perhaps, she has found a novel way of sustaining herself financially; to be the face of dissent and appeal for donations to sustain her lifestyle. There is a Malay term for this; `Jual Koyok’. She has a product to sell and she has willing customers. The only problem is that her product does not heal, but instead will have long-term adverse effects on the society. That is why we think that it is time for the government step in to regulate private donations given to people for specific causes. For a start, they need to publish their statement of account. Regulation of private donations for specific causes will in some way, prevent other people from using the same ruse to earn a living.

We are all for public discourse. But let it be done in a civilised and constructive manner. Not by selling miracle cures or busking in public using political speeches instead of strumming the guitar for donations.

Indeed freedom is not free. In Han Hui Hui and Roy Ngerng’s case, it comes with a bank account number.

Send your commentaries to mail@redwiretimes.com