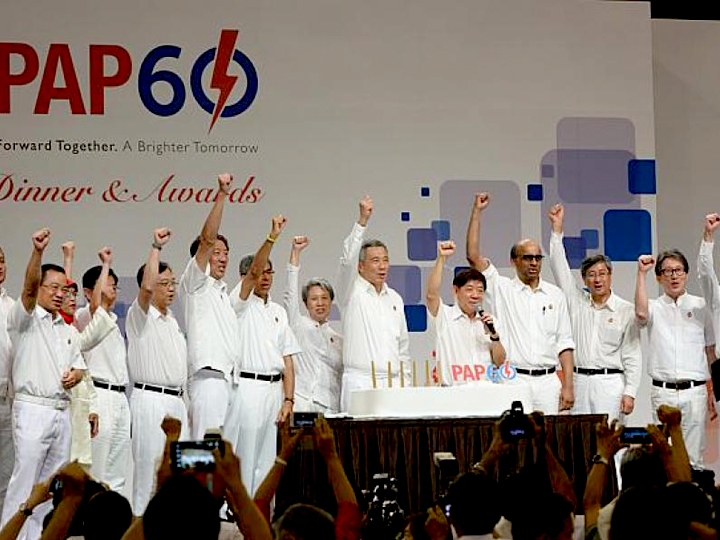 The constructive, nation-building media are quoting the “experts” as saying that there will be a sympathy vote* for the PAP. The anti-PAP cybernuts are cursing their luck that their wish came true (LKY died) but are worried that the PAP will not now lose the GE as they had expected: taz how deluded or nutty they are.

Let’s cut to the chase and analyse the available data shall we?

First, the data on LKY’s lying-in-state and funeral

About 1.5 million people paid tribute to Mr Lee at sites around the country this week the government said.

“454,687 people filed past the coffin as it lay in state in parliament, averaging 6,500 every hour according to government
1.1 million people paid tribute at 18 community sites around the country – a fifth of the population”

[T]ens of thousands lined the streets to view the funeral procession carrying Mr Lee’s coffin through the city-state.

If all the 1.5m that paid their respects were citizens and voters, that may conceivably result in the PAP getting 70% of the popular vote in next GE.

Not good news for the WP (their MPs would lose their cushy, well-paid jobs where the only KPI is how silent they are), Dr Chee’s SDP, people like me who want an end to the PAP’s hegemony, and the cybernuts.

Even if we assume that there were no FTs paying tribute (Impossible because, after all, he did say that FTs are more hardworking than S’poreans: respect begets respect) and no anti-PAP people paid their respects (but we know at least the Chiams, P(olitian) Ravi, Jeannette Chong anfd New Citizen Han Hui Hui** did go to some tribute), 0.96m is a lot less than the 1.2m who voted for the PAP in 2011. In fact, it represents only 45.7% of the popular vote.

Where’s the missing 14.3 of the popular vote that voted for the PAP?

Now 0.96m is higher than the 35% of the popular vote that die-die must vote for the PAP (the voters who voted for Tony Tan the PAP’s (and it’s rumoured LKY’s) preferred presidential candidate. But it’s a lot less than the 70% or 1.5m that voted for Tony Tan and Dr Tan Cheng Bock. Dr Tan has never renounced his PAP past, unlike Tan Kin Lian who lost his deposit, so we can assume that the 35% of the voters who voted for Dr Tan are willing to back the PAP.

There may be one, but how to prove it?

Seriously, what I’ve tried to show** is that the 1.5m figure (a very good turnout in the context of a population of 5.5m) can be explained by the turnout of the core PAP supporters, their children, and FTs.

Given LKY’s high regard for FTs and that the FT PMEs live the good life here, it’s a fair bet that many FTs paid their respects. I mean even the Indian manual workers (who we are told are bullied and exploited) hold him in high regard: their villages back home honoured him in their traditional ways.  Ways which annoyed at least one anti-PAP activist who is ethnic Indian.

The experts should not BS about the sympathy vote without any evidence. Now if they had access to the results of polling and analysis of focus groups which they or third paries like IAD or PA conduct, fair enough: but if they don’t they should juz sit down and shut up. And think.

*Actually so did I. On the day of the funeral I tot the PAP could get 70% of the popular vote if the election is held in June or September: until I tot about the matter.

**She cursed him on Facebook sometime back, saying she was hoping he’d die soon. Well she got her wish, so maybe taz why she went to the lying-in-state? Her way of dancing on his grave?

***Of course, my assumptions can be challenged. Challenge them please.

This commentary was written by Atans1 and first published on Thoughts of a Cynical Investor.