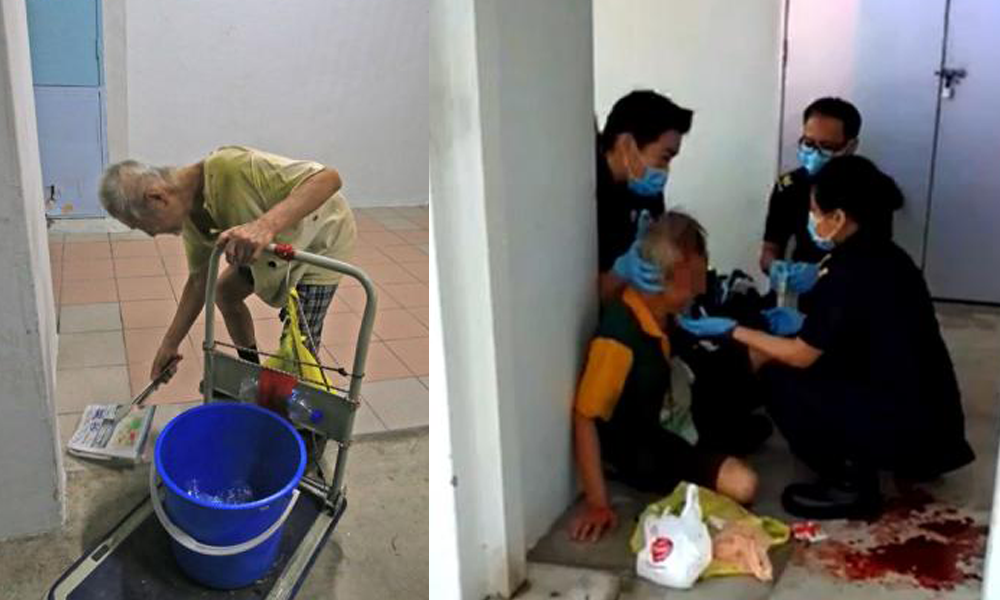 It was a pretty traumatic experience for this 70-year-old cleaner at Tampines Avenue 8 – in April, he slipped and fell during work and injured his head.

Fortunately, a resident who happened to pass by called the ambulance and tended to him.

After being warded for a month, said the resident, the “stubborn” cleaner uncle was spotted back at work, performing his usual daily routine of sweeping the area around Block 891A from 3pm to 10pm.

But this time, instead of wearing his usual cleaner’s uniform, he was seen sweeping the floor in his own tattered clothes.

This sparked concern from residents, who wondered whether he was sacked because of his injury.

Instead, he was advised by his supervisor to take a break but refused and quietly went back to work instead.

Residents there would take pity on him and offer to give him some small donations of money or food, but the elderly “undercover cleaner” always refuses them and has to be coaxed into accepting the gifts.

“Every time I give him food, he will reject, saying that he can take care of himself. It’s so hard to make him just take.”

Cleaner uncle, a man of few words and who prefers to remain anonymous, said that he lives alone as his daughter has already gotten married and moved out.

He said that he is happy as long as he has enough to eat and clothes to wear, and wants to carry on working.

Tampines Town Council says it is aware of cleaner uncle’s situation and is assisting him with his living conditions.