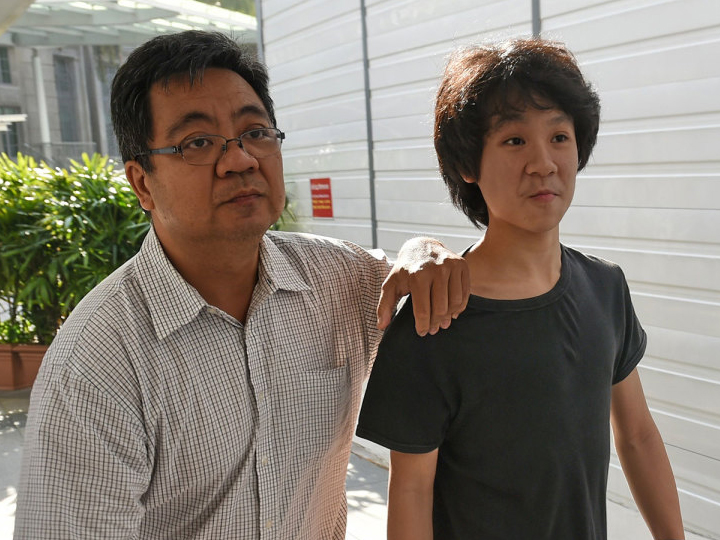 Amos Yee, the 16-year-old Singaporean teenager who’s facing charges after uploading a video on YouTube insulting the late Lee Kuan Yew and Christianity, has written a long rant accusing his father of abusing him as a child.

In a blog post, Yee asked that his mother file for divorce from the “killer” or “bastard” – terms which he uses to refer to his father.

In one account, he related a confrontation with his father before he was due to attend court, over his choice to wear his trademark black T-shirt.

“He, with uncontrollable, savage anger, held my shirt again and incessantly pushed my body repeatedly on the doors of my cupboard as my mother resumed her fruitless screaming.”

Yee is now out on bail.

This is his full account of the abuse and violence he claims to have been subjected to as a child, as posted on his blog yesterday (29 Apr).

Now some fellow Mediacorp Actors attributed my actions on the Lee Kuan Yew video solely on the fault of my parents. Now of course being Mediacorp actors, they have the brain size of that of a peanut, with their views having as much insight as the quality of their shows.

Unless you are enslaved, parents are not the primary influence to their children, especially in our technologically advanced world where influences are much more eclectic. And to claim that the fault of a child, lies mostly in the fault of the parents, is absolutely fucking dumb. However, I do acknowledge that though parents are not the primary influence on a child, like your friends, the books you read or the movies you watch, they do have an effect in your life. And the abusiveness of my father, probably affected me in some ways.

During my childhood, my father would viciously berate me whenever he was upset with me (For cases such as when I had rubbed my eyes too much), and though I never saw it, I heard that my mother was slapped by him several times. And he did violently pin me down onto a bed when he admonished me for my Chinese New Year video a few years ago (The implications of that image is stunning).

But, the exact moment that I would I want to talk about that I feel is most indicative of his abusiveness, is the incident that happened just a few hours before my first time in court.

The night before the hearing, my once-Godmother (Now simply aunt because you know.. Atheist) and my family pleaded with me to ensure that I wore outdoor clothing the next day in court instead of my initially planned, pyjamas(A frequent apparel of mine due to comfort). Claiming that if I did not wear ‘decently’, the judge would be more severe towards me, and would issue harsher conditions that I had to comply with. I of course completely disagreed with the notion that clothing had or should have anything to do with a person’s view towards me, and was reluctant.

However seeing that they were exceptionally worried, I felt a generosity to put their minds to rest, therefore though I disagreed with them,  I obliged to their request. After all I did have some outdoor clothing that I was comfortable and satisfied with, so I felt that the compromise was worth it.

A couple of hours before the hearing, my mother and I picked that black shirt and beige pants, the clothes you’ve seen me wore during the court hearing,  that were to my great satisfaction.

However, contrary to the views of mother and I, my father wasn’t satisfied with those outdoor clothing, in fact he thought that they looked too casual for court.. He wanted me to wear more ‘formal’ clothing, with buttons, collars and possibly a tie or bow, otherwise the judge wouldn’t accept it.

Such arrogance for my father to put his own personal perspective, and claim that it is that of others. If the judge were to truly dictate his decisions on me based upon the quality of my ware, he would be unjust. Though maybe that was what my father was going for.

Since I was completely negligent of the state of my closet, formal clothing was scarce, and the only clothes that managed to fit my father’s meat-headed criteria were these horrid-looking collared blue shirt and these exceptionally uncomfortable black pants.  Those clothes appealed to his idea of a ‘formal’ appearance.

I put them on to and they looked absolutely awful, I witnessed myself in the mirror and was flabbergasted by the sight of a blue leprechaun. However, my father said that those were the only clothing that were acceptable, and I had to wear them.

Naturally, I expressed refusal to do so, and thus commenced my father’s violent behaviour. He pulled my shirt towards him, and made the gangsterish gesture, of clenching one’s fist and pulling it back, threatening a punch on my face,  if I did not comply.

My mother screamed, pleaded, and desperately attempted to pull me away from my father’s supposed oncoming attack.

Initially having complete fear of the violence of my father I had developed ever since I was a child, I said something along the lines of “alright, alright I’ll wear it”, which led him to cease his attack. I proceeded to walk into the toilet to look into a mirror and contemplate (Dramatic I know).

Then ultimately, having developed a subversiveness that had transcended anything that I had as a child, knowing that I’ll be completely uncomfortable wearing those clothes,  it would probably act as a distraction in court, and the fact that of course it looked absolutely wretched, I refused to comply, and so went out of the toilet and told him:

He, with uncontrollable, savage anger, held my shirt again and incessantly pushed my body repeatedly on the doors of my cupboard as my mother resumed her fruitless screaming.

However, he, supposedly wondering why after all these years I had actually resumed a provocation even after threats of violence. Having a kind of uncanny, revelatory expression like that of a confused hog, slowly released his grip and said something along the lines of, “ You know that if I hit you, and there is mark.. and then there are reporters out there….’

And of course, I grinned, and then responded, “Ahh.. I see you have found out my plan”.

He plodded away in defeat.  I proudly went back into my room, and changed my clothing.

This was the  1st ever instance in my life where I had overcome the threats of violence from my father, when I had not acceded to his demands, but he had to accede to mine. There was a sense of victory as I donned my black clothing, and beige tight pants. And after I had equipped myself, I sauntered up to him and said a few words.

And those few words catalysed his almost brutal execution…

With both hands, he took my head and violently slammed it on the wooden table beside us. Then he held me on my head and my body, flailing me around as I wailed and shrieked in terror, before he released his grip. I fell down hard on the floor.

He, had still not satiated his anger, and thus took my head and violently banged it on the hard, concrete floor.

In the background, obviously with the incessant screaming from myself, it caught the attention of the other people in the house. My mother continued her pleading for him to stop, my grandmother and maid just stood in a corner and did absolutely nothing.

Finally I think that my mother realised the ineffectual nature of her noise and decided to implement some form of tugging to my father. I think she used quite a considerable amount of force as she pulled my father’s arm.  And quite surprisingly, in a sort of miracle, the beast was finally tamed.

Huffing and puffing, he lumbered away.

Now fortunately, during both times my father slammed my head on the table and the floor, I had both my hands, firmly placed on the sides of my head, protecting me from the impact. If I had not had both those hands on my head, I would have the full impact of both the force of my father, and the floor. Knowing that the head was an especially sensitive area, I could have potentially become a vegetable, or died before I entered the court.

And after this episode, as I sat on the floor trembling in fear, my grandmother, instead of berating her son for his horrid behaviour, went up to me and said to me in Chinese ‘He’s just doing this because he cares for you, you should behave yourself and not make him so angry’

He’s doing this because he cares for me? Well if almost killing me is his way of expressing care, then I absolutely fear the instance when he ever decides to express love.

I can see from the view of grandmother, how these violent tendencies runs in the family. I so dearly hope that these acts of abuse, turmoil and violence, is not hereditary, because I would not be able to live with myself if I ever had to resort to violence to solve my problems, or to express to anyone my quote unquote ‘care’.

And whenever I tried to tell people what he did to me, they like my grandmother just said, ‘he only did that because he cared for you’ and would not do anything to try to stop him. And when he and I were out of the sight of others, he would tell me ‘There is no harm, or damage to your body, no one will ever believe you’.

Now the few words I said to him before he commenced his nearly brutal execution, were:

‘I am willing to let the previous incident slide, let bygones be bygones. But If you are ever violent to me again, I will reveal to everyone what happened.’

He then proceeded to almost killing me, so here we are.

Now of course, the common viewer could blame me for being terribly provocative to my father, but are you actually going to validate that my provocation was worthy of such a behaviour? It’s like trying to validate summoning bears to maul 42 children for making fun of a bald priest. God actually did that by the way (2 Kings 2:23-25).

Ever since that incident, whenever I talked to my mother, I would refrain from referring  to my father’s previous titles of  ‘father’ or ‘daddy’, and instead refer to him as ‘the killer’ or ‘the bastard’.

If one is able to almost kill a person over the choice of one’s clothing, seeing how the pressures of my court case is prevalent and as you can see I am as subversive as ever, I think it would be wise for me to have some semblance of a restraining order.

I seek and implore for help. If my mother would kindly file for a long overdued divorce and some sort of child protection service could be in order, that would be great.