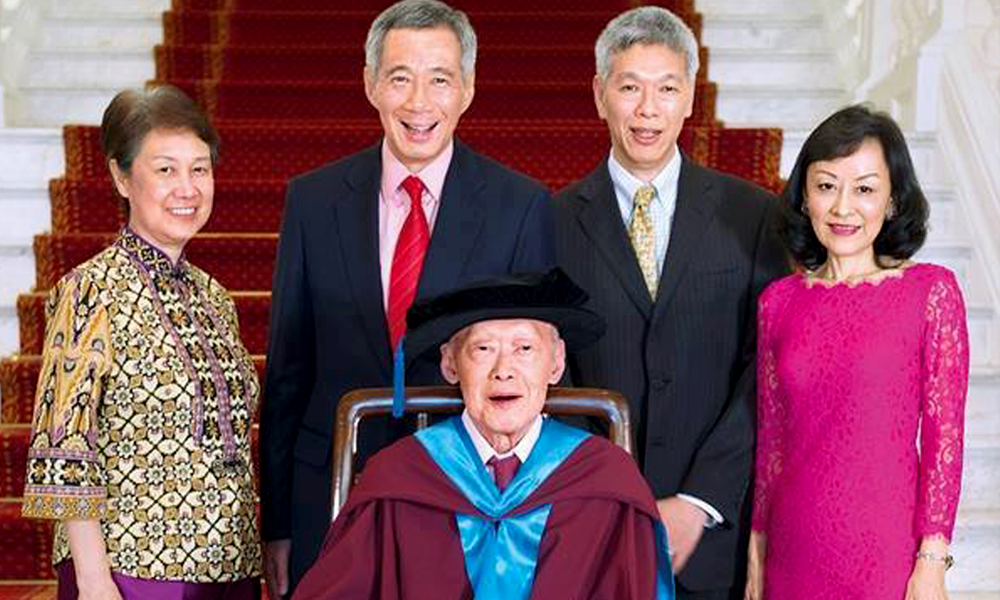 A Law Society disciplinary tribunal has found Lee Suet Fern guilty of grossly improper professional conduct for role her in the preparation of her father-in-law Lee Kuan Yew’s last will.

What apparently lies at the heart of the disciplinary tribunal’s ruling is the question of whether Lee Kuan Yew, back in 2013 when he signed his last will, was a dimwit who had already lost his senses.

Was Lee Kuan Yew’s mind ticking right when he asked to change his will?

The tribunal said Mrs Lee and her husband arranged for LKY to revoke his existing will and execute a new will (which would be the “last will”), and that they then hastily arranged for LKY to sign the last will to the extent of telling LKY not to wait for his usual lawyer, Ms Kwa Kim Li.

However, Mrs Lee’s defence said that LKY had independently decided to re-execute his first will, and that he was a brilliant lawyer who knew “exactly what he wanted”.

Between September and October 2013, LKY was hospitalised for an extended period due to a number of medical issues.

After he decided to re-execute his will, LKY’s usual lawyer, Kwa, had promised to have something ready for him to sign by the end of the week (15 Dec 2013) but nothing was done.

Kwa was also overseas and couldn’t be contacted.

And so, Lee Hsien Yang asked Mrs Lee to help prepare and re-execute LKY’s will.

The defence said that “if there was a rush, that was because Mr Lee Kuan Yew wanted things done quickly, as was his wont.”

Did Lee Kuan Yew independently change the terms of his will?

The tribunal said that LKY had agreed on certain matters and amendments to his will with Kwa, only to act in a way that suddenly and completely disregarded what he had agreed with Kwa when he re-executed and signed his last will.

However, the Mrs Lee, together with Lee Hsien Yang and Dr Lee Wei Ling state that “Lee Kuan Yew on his own drafted an amendment to the will (a codicil).”

Dr Lee added that her father “knew full well what he was doing” and “was clear in his decision for the will”.

Did Lee Kuan Yew understand the terms stated in the last will that he had signed?

The disciplinary tribunal found that Mrs Lee did not alert and advise Mr Lee on the differences between the draft last will she gave him and his sixth will.

However, the defence said that for Mrs Lee to be found guilty of deceiving LKY, it would mean that LKY “did not understand his own will despite reading and re-reading (his will) not just once but several times”.

LKY has a starred double first in law from Cambridge University.

Stating that LKY was “not some ignorant feeble-minded dotard being fooled by a sharp lawyer”, the defence said that “Mr Lee Kuan Yew was a dominating character of sharp intellect who knew exactly what he wanted and was accustomed to having his instructions carried out without delay.”

The lawyers added that it is “completely unbelievable” that LKY did not realise that the clause to demolish his house at 38 Oxley Road was in the last will as demolishing it was “important” to him.

Was Lee Suet Fern trying to hoodwink LKY to benefit her family?

The disciplinary tribunal ruled that Mrs Lee’s conduct was in direct contravention of rules governing solicitors, in which a lawyer must not prepare a will if the lawyer’s family member is going to receive a significant gift from that will.

However, Mrs Lee’s defence said that the differences between that and the last signed will were minor, and the changes did not benefit Mrs Lee or her husband in any way.

The defence added that Mrs Lee was unaware that LKY had in his final will increased Lee Hsien Yang’s share at the expense of his sister Dr Lee Wei Ling as LKY had instructed Kwa to destroy all previous will whenever he made a new one so no one would know their contents.

Interestingly, Dr Lee Wei Ling has consistently stood on the side of Lee Hsien Yang and Mrs Lee despite her share of the estate being reduced in LKY’s last will, even calling the disciplinary tribunal’s ruling a “travesty”.

The case will proceed to be heard in open court, before the Court of Three Judges.