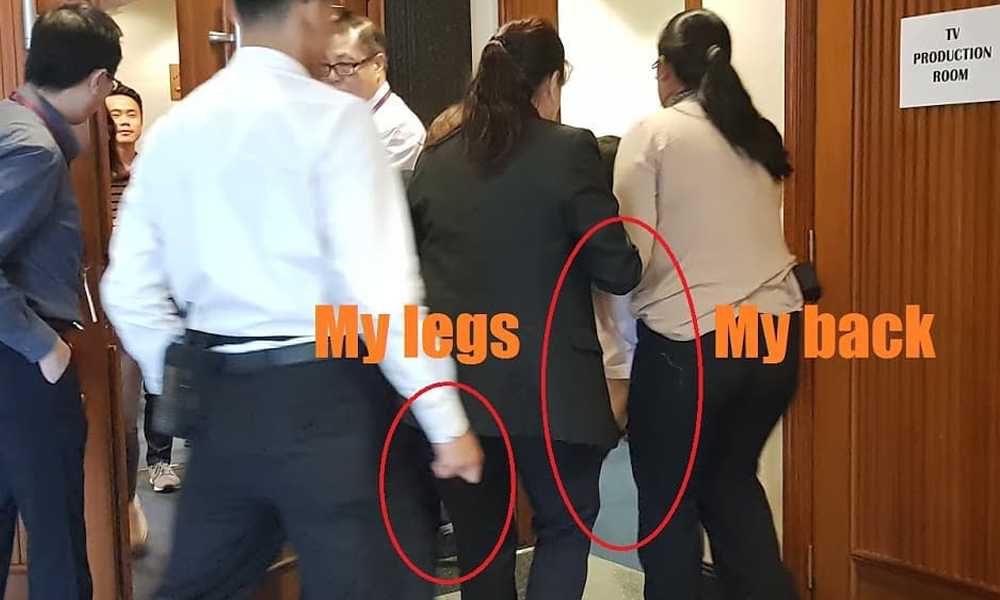 Political activist Han Hui Hui claims that she was unfairly manhandled by police officers when she was ejected from a Select Committee on online falsehoods hearing.

She said she felt humiliated by the treatment.

Han was ejected from the hearing after repeatedly holding up a sheet of paper which bore an image of a book which alleges that the Singapore government makes use of the legal system to legitimise its actions.

The book, “Authoritarian Rule of Law – Legislation, Discourse and Legitimacy in Singapore”,  is written by Jothie Rajah, the ex-wife of Law and Home Affairs Minister K Shanmugam, who is part of the Select Committee and was in chambers at the time. 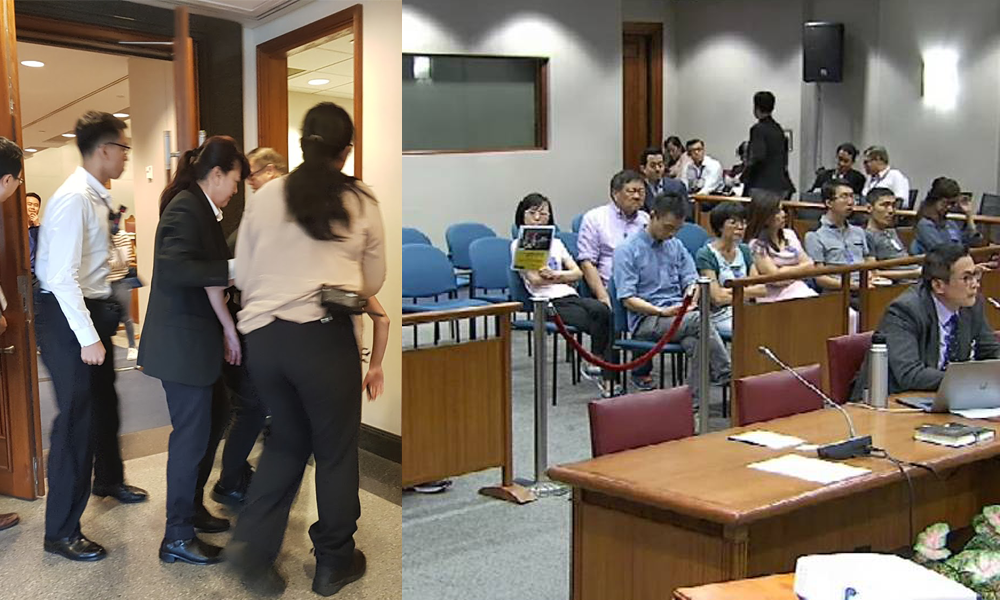 This is Han Hui Hui’s description of her ejection from the hearing:

“I reached Singapore’s parliament at about 2:30pm. I was made to take out my identity card, all other items such as electronic devices, handphones, wallets, keys, water bottles etc were kept in the locker. After handing over my identity card in exchange for a pass and going through the security, I finally managed to sit down at around 2:45pm.

The only thing allowed to be brought into the parliament was writing materials. So, I brought a pen and 20 pieces of scrap papers that were all printed on one side. I was writing what I find interesting on the papers as the hearing went by.

Unfortunately, they told me I was not allowed to do so and demanded for my writing materials. Everyone started turning around to look at me, I didn’t want to create a scene so I gave them all my writing materials right on the spot. But like our retirement sum that is always insufficient, I gave them everything and it’s still insufficient, they don’t even want me to be present for the hearing at all.

Being a law-abiding citizen, I always try my best to obey their instructions and said that I will definitely leave if they could give me a reason why. Strangely, they didn’t give me any reason and three police officers started manhandling me in front of everyone. During the process, they pulled up my shirt, exposed my body and repeatedly dropped me on the floor.

It’s about 3pm when they locked me up and there were about 10 police officers in the room. They said there were 18 pieces of paper instead of 20, and they want to investigate those scrap papers. I was scared as I remembered the times where I was investigated for 8 hours from 2pm to 10pm.

I told the police that they can keep the papers as they are scrap papers, but I need to leave as I have another appointment. The police said they need to investigate those papers even though it’s shown that they are all scrap papers printed on one side while the other was blank for me to write notes. They refused to let me go to the toilet or have any water even though I was bruised after being manhandled by three police officers.

I couldn’t take it any longer and said I really needed to pee, otherwise, I may just do it on the spot. That was when they finally allowed me to go to the toilet with two police officers staring at me taking off my pants, sitting down to pee and wearing them again. It feels humiliating after exposing my body during the manhandling, and now having two police officers staring at my body as I urinate.

In the room, it was cold and there was no food. I wasn’t the only person shivering away as the air con blasted against me but police officers who were in their uniforms were shivering and drank hot coffee to ease their body. After spending about an hour in the room waiting for the investigation officer to come and interrogate me, that was when they said the interrogation will be held in another room instead.

About 20 police officers escorted me along the passage way while grabbing my bruised arms, and I was made to circle around the parliament. It costs SGD$470,000 for the National Arts Council to build a bin centre, I wonder how much did it cost Singaporeans to build a parliament when they can’t even watch live telecast but only edited clips?

I’m curious because like how below Singapore’s courts are actually prison cells, Singapore’s parliament has a lot of recreational rooms and even has facilities like a huge gym that the public can’t access! After being made to walk around the parliament, I was finally allowed to sit down in the room where the interrogation was supposed to take place.

It’s about 4:30pm and they gave me water to drink as I was coughing badly. Another hour passed and it was about 5:30pm when the police officers came in and started asking about my belongings which I know nothing about since they manhandled me away from room to room. They wanted my writing materials and I gave all to them, I don’t even need them to return it back to me like before.

In the end, they said that I’ve been banned from entering the parliament to listen to hearings.
However, I’m not sure if this is an oral threat or what since there’s no written document.