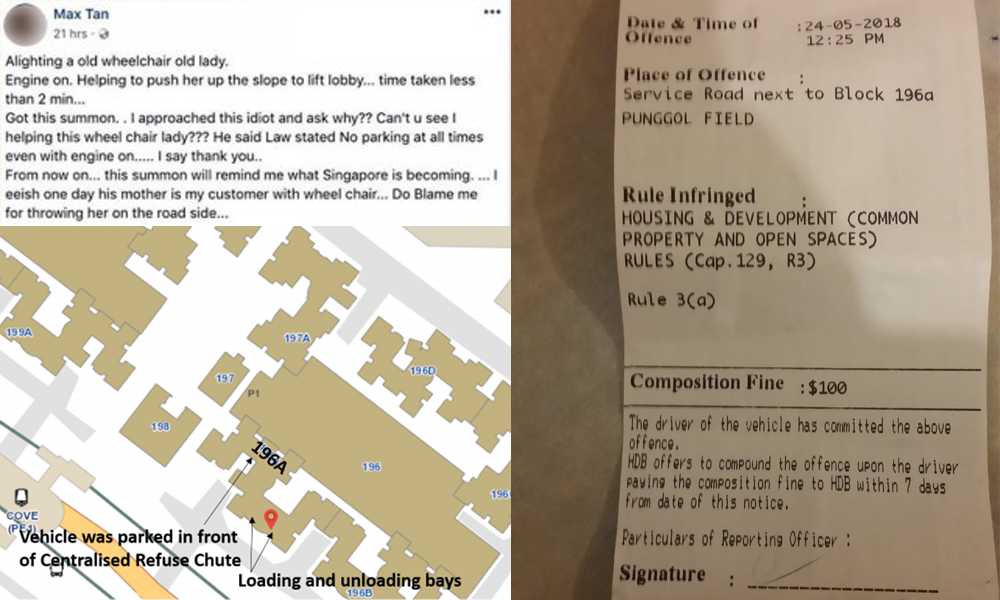 You might have come across a Facebook post by taxi driver Max Tan, who was cow beh cow bu-ing about getting saman by an LTA officer while stopping his car with the engine running to help a wheelchair-bound passenger.

The Housing Development Board has called Tan’s tale a sob story without merit.

Tan, who has since removed his Facebook post, said that on Thursday (24 May) at about 12.25pm, he stopped his vehicle on a Service Road next to Block 196A Punggol Field Road.

Tan said he did that to lend assistance to a passenger in a wheelchair who needed to get to the lift.

That’s when a Land Transport Authority officer issued him a traffic summon.

Tan said he tried to explain why he had parked there, but the officer told him he had committed an offence by parking his car on the Service Road.

Tan ended his post complaining about the S$100 summon, and how Singapore has become a “cold” society.

But the HDB has given a different version of the event after investigating the incident.

Standing by the traffic summon, the HDB said that Tan had alighted his passenger at the service road in front of the central rubbish chute, when the two nearby loading bays were empty.

Those bays have ramps that facilitate barrier-free access and movement for persons with restricted mobility.

The HDB also said that Tan had parked his vehicle there for 10 minutes with the engine turned off (not 2 mins with the engine on as Tan had claimed), and that the service road is meant to be kept clear at all times for emergency vehicles.

The HDB said that traffic wardens are not rewarded for the number of summons they issue.