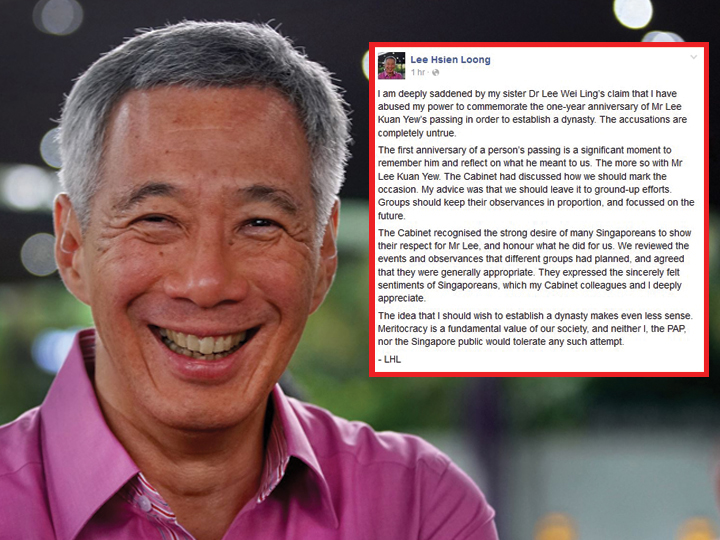 The accusations come as a public spat between Lee Wei Ling and SPH rages on.

They were made public after Lee leaked an email correspondence between her and Straits Times editor Ivan Fernandez.

This is PM Lee’s response:

“I am deeply saddened by my sister Dr Lee Wei Ling’s claim that I have abused my power to commemorate the one-year anniversary of Mr Lee Kuan Yew’s passing in order to establish a dynasty. The accusations are completely untrue.

The first anniversary of a person’s passing is a significant moment to remember him and reflect on what he meant to us. The more so with Mr Lee Kuan Yew. The Cabinet had discussed how we should mark the occasion. My advice was that we should leave it to ground-up efforts. Groups should keep their observances in proportion, and focussed on the future.

The Cabinet recognised the strong desire of many Singaporeans to show their respect for Mr Lee, and honour what he did for us. We reviewed the events and observances that different groups had planned, and agreed that they were generally appropriate. They expressed the sincerely felt sentiments of Singaporeans, which my Cabinet colleagues and I deeply appreciate.

The idea that I should wish to establish a dynasty makes even less sense. Meritocracy is a fundamental value of our society, and neither I, the PAP, nor the Singapore public would tolerate any such attempt.”