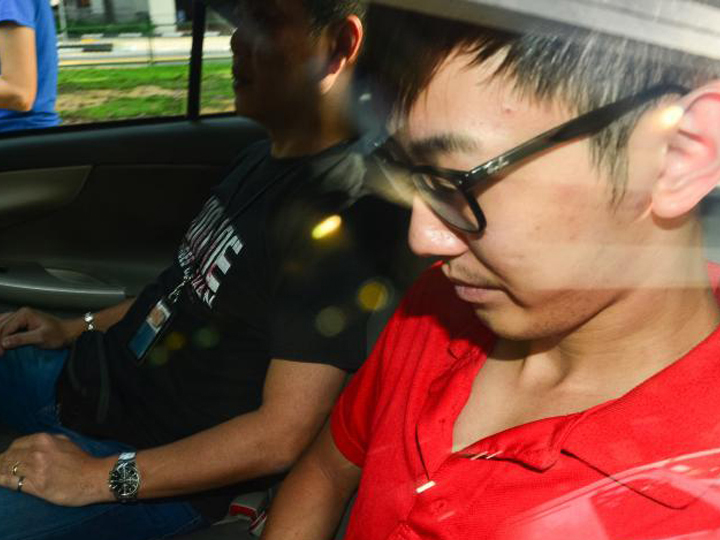 He had entered into an open relationship with his girlfriend, but grew angry when she started seeing other men and told a friend he wanted her to “die an ugly death”.

Then, when his rage boiled over one evening, he really killed her.

28-year-old Neo Chun Zheng stabbed to death his 23-year-old air stewardess girlfriend Soh Yuan Lin with a 9cm-long knife along the common corridor outside his flat unit at Block 268B Boon Lay drive.

She had brought dinner for him that night on 26 Nov 2015 at about 8pm, after he pestered her with numerous calls and text messages throughout the day.

The 2 got into an argument when they met, and when Soh tried to use her mobile phone to text her mother, Neo snatched the phone hid it in the house before returning with a knife that he had taken from his room.

Neo’s mother quickly stood between them and tried to wrest the knife from her Son.

But in the struggle, she knocked Neo’s glasses off and he shoved her to the ground.

Then, Neo swung the knife at Soh, plunging it into her neck.

Soh collapsed face-first onto the ground and began to bleed from the neck and mouth.

Neo threw the knife down the rubbish chute and used a towel to apply pressure on his ex-girlfriend’s neck to stop the bleeding.

When police officers came, Neo confessed that he had stabbed Soh and surrendered himself.

Soh subsequently died in hospital from the stab wound, which cut her jugular vein.

Neo and Soh began dating when in April 2014 when they were working as customer relations executives at Marina Bay Sands.

Prior to this job, Soh had been an air-stewardess.

They agreed to keep their relationship a secret, and “non-exclusive” – meaning they could continue to date other people even as they dated each other.

In March 2015, Neo quarrelled with Soh after finding out she had had sexual relations with a colleague.

He obtained compromising photos of her and the colleague and showed them to other colleagues.

In September 2015, they quarrelled after he found out she was texting someone she had met and kissed at a club.

They broke up that month because Soh found that Neo was “too possessive and overly-controlling in their non-exclusive relationship.”

Neo then discovered that Soh had been meeting other men on the dating app, Tinder.

He became angry with her for going back on her word about staying single after the break-up, and told a friend he was thinking of disfiguring her with acid so she would “die an ugly death”.

Then the fatal stabbing on 26 Nov.

In court today, Neo said that he intended to plead guilty, and was convicted of culpable homicide.

He will be sentenced at a later date because his lawyers are disputing a psychiatric report from 2015 which indicated that he had no mental disorder at the time of the offence.