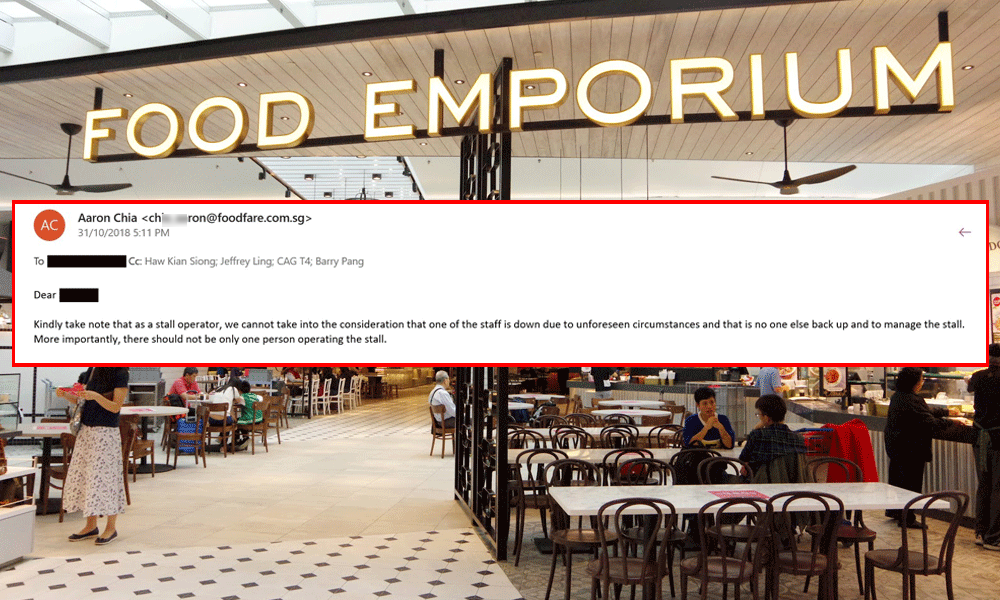 The daughter of a hawker at the Changi Airport Terminal 4 food court has lashed out at food court operator NTUC Foodfare for fining his father S$3500 for closing his store due to a fractured foot.

The hawker’s daughter also shared how another elderly hawker at the food court reportedly collapsed and died from a heart attack due to overwork because NTUC Foodfare denied his request to take during Chinese New Year this year.

S$3500 Fine for Closing the Stall For A Week

The hawker’s daughter, who wishes to remain anonymous, said that NTUC Foodfare refused to allow her father to close his stall for a week due to a foot fracture.

“In June 2018 this year, my father was injured while working in the food stall. We have constantly been facing staffing issues as we were not allowed to hire foreigners and less Singaporean and PR are willing to take up a job in a food stall. Due to that, my father had to work 2 shifts a day in order not to get a penalty from NTUC Foodfare.”

She added that even after sending x-ray images and hospital records to NTUC Foodfare to prove her father was injured,  NTUC Foodfare maintained a rigid and unforgiving stance.

“As his injury was too serious this time, we had to close the stall for a week. I wrote to NTUC Foodfare to seek their understanding on our situation and that we could not find a head chef right immediately to take over my dad. NTUC Foodfare ignored our explanation and instead slapped us with a S$3500 fine.”

NTUC Foodfare replied that “we cannot take into consideration that one of the staff is down due to unforeseen circumstances” and said that “more importantly, there should not be only one person operating the stall”. 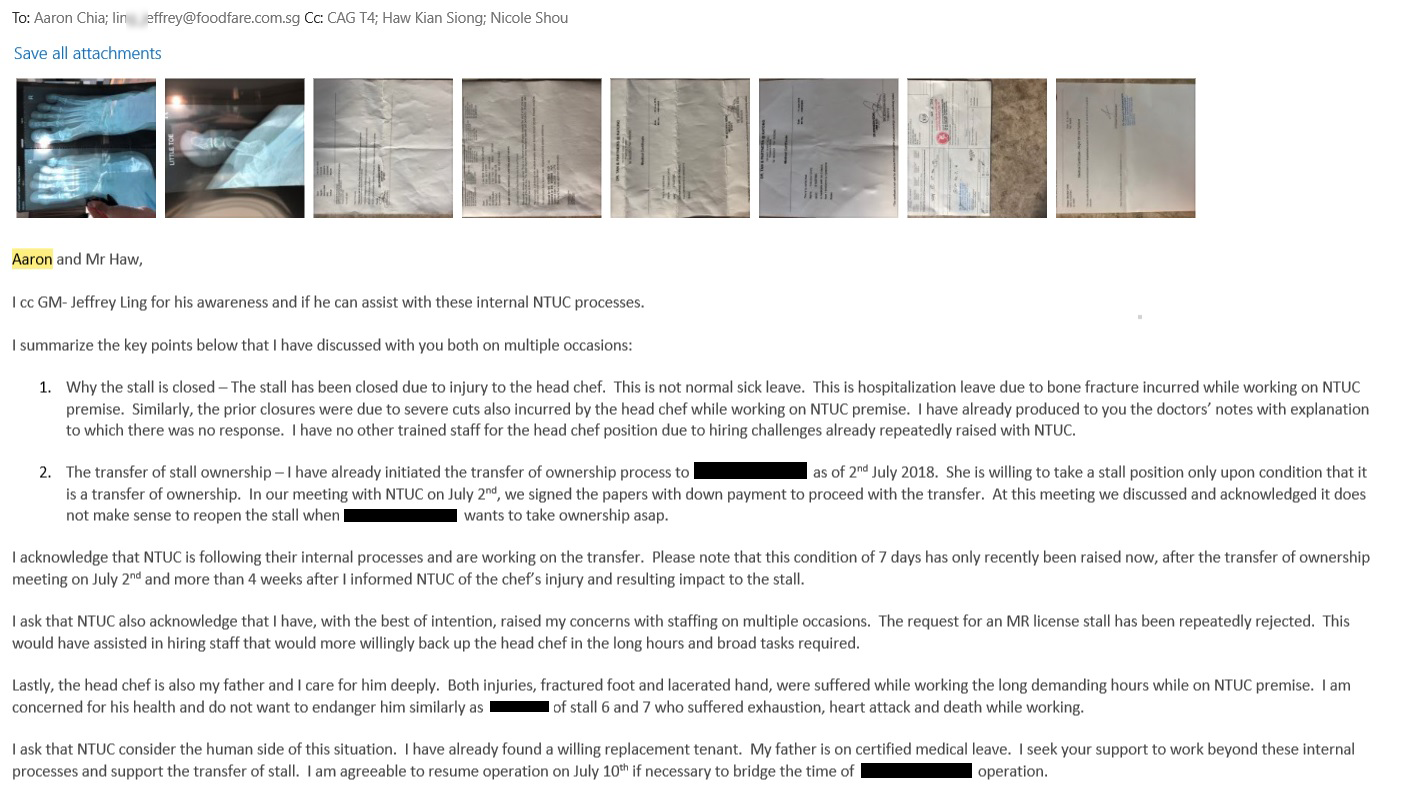 NTUC Foodfare has since issued a statement saying that the licensee of the stall, the hawker’s daughter, agreed to open the stall after her father’s medical leave and any fine would be waved if she did so.

However, she did not follow up on this action and was fined as a result.

Allegedly Working a Hawker to Death

The hawker’s daughter also described a separate incident which took place over Chinese New Year this year where NTUC Foodfare allegedly worked an elderly hawker to death and thereafter refused to return the full deposit for his stalls to his family.

She said that the elderly hawker managed stalls 6 and 7 of the Changi Airport T4 food court, and asked to close his stall for the first 2 days of CNY as his staff would be on leave.

However, NTUC Foodfare rejected the request and threatened penalties, and as a result the elderly hawker had to work 18-hour days to keep the stalls running.

“On the second day of Chinese New Year, he suddenly felt unwell and was rushed to the hospital. He passed away in the hospital. Heart surgeon confirmed that he collapsed as he was overworked… For 6 months, NTUC did not return this money to his family, and his family had to continuously apply to NTUC to get their money back. Ultimately, they only got back 50% of it as it was indicated that 1 of the stalls was signed under a company and the other one was signed under sole proprietorship.”

The hawker’s daughter said she believed NTUC Foodfare could be trusted to look after its staff as it was a linked to the government, and is disappointed with how the food court operator treats hawkers.

“It is saddening to see how a government link food operator who claims as a non – profit organisation being so inflexible and ignores the health situation of their tenants.”

NTUC Foodfare has denied that it worked a hawker to death, saying that it has never received any request from the late hawker, “Fong”, or his family to shorten operating hours, and that its outlet manager had advised “Fong” to seek medical treatment upon seeing that he was unwell.