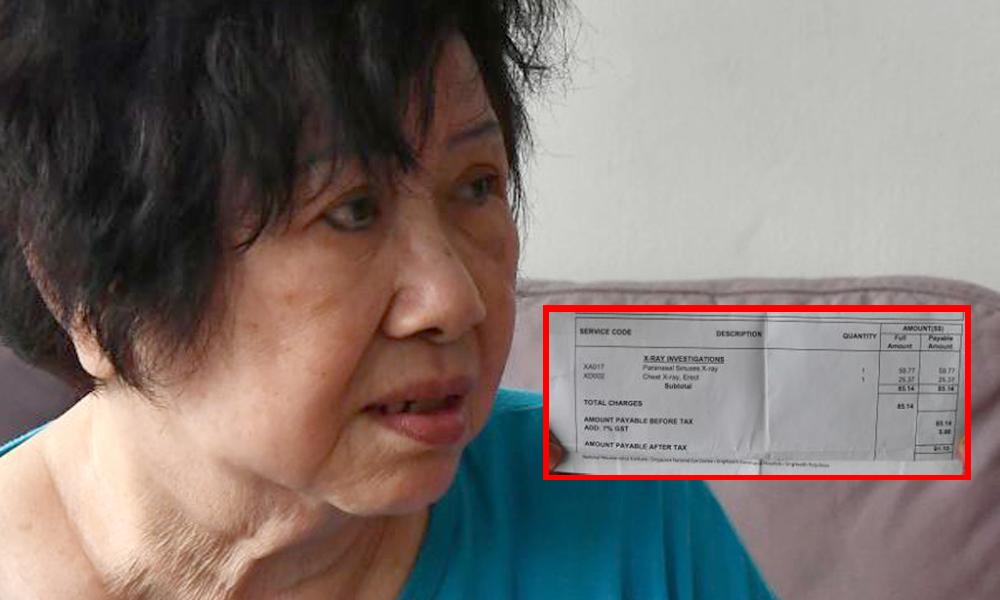 Despite holding both a Community Health Assist Scheme (Chas) card and Pioneer Generation card, 73-year-old Yeo Saw Hua was denied subsidised fees and the use of her Medisave when she went to the polyclinic for an X-ray.

The reason being – she was referred by a private General Practitioner (GP) and hence was not eligible.

Mdm Yeo had been suffering from a persistent cough that went on for months, and cough mixture didn’t help.

So, she went to see a GP at Pasir Ris Clinic & Surgery.

Suspecting that there was something more serious about her cough, he sent for an X-ray at a polyclinic.

Most GPs do not have X-ray facilities in their clinics.

Mdm Yeo was billed S$91.10 for the X-ray, and was told by polyclinic staff that she had to pay the full sum, including GST, in cash.

She was told that she was considered a “private patient” as the X-ray was not requested by a polyclinic doctor, and hence could not use her Medisave and was not eligible for any government subsidy.

This includes patients who have already been means-tested and found to be from the low-income group, which is how they qualify for the CHAS card in the first place.

However, when pressed about it in parliament last month, Health Minister Gan Kim Yong essentially said in a written reply that that’s how things work.

“As these patients are not assessed by polyclinic doctors, our doctors are unable to determine whether the ordered tests or investigations are appropriate. Therefore, they are considered private healthcare services, for which polyclinic subsidies do not apply.”

Gan added that the Health Ministry will “review” how it can better support Chas patients managed by Chas GPs, “including ways to improve access to clinically appropriate subsidised tests and investigations”.

Mdm Yeo’s thorny issue was raised in parliament by Pasir Ris-Punggol GRC MP Zainal Sapari, after her husband appealed to him for help.

“Since, Chas patients were means-tested, they should be given the subsidised rates at polyclinics for follow-up tests or investigations ordered by private Chas GPs. Otherwise, it would disincentivise Chas card holders to seek treatment at Chas GPs and (they would) continue to go to polyclinics.”

“I believe MOH, as a matter of professional courtesy and trust in the Chas GPs, should consider any follow-up tests/investigations ordered by the Chas GPs as necessary and appropriate.”

In December last year, the Health Ministry was roundly condemned after an 82-year-old man was only able to claim S$4.50 from MediShield Life to pay for his eye surgery that ran into thousands of dollars.

MOH was subsequently questioned over the revelation that 20 percent of subsidised patients are not getting full cover from MediShield Life.