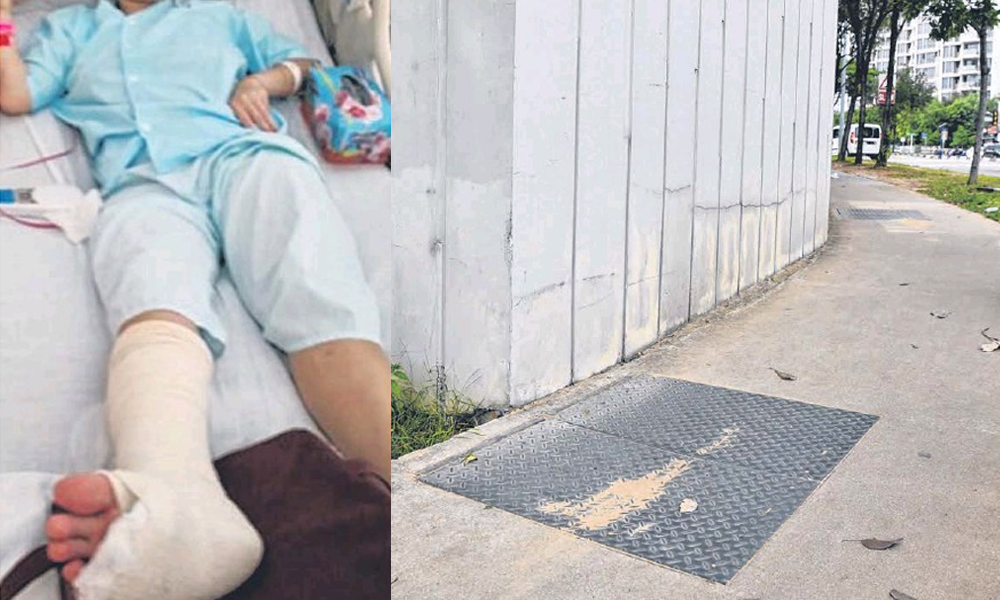 The Public Utilities Board is getting sued for a sum of several million dollars by a woman who fell into a drain that was left open by workers.

46-year-old Chan Hui Peng was walking on a footpath in Simon Road when she fell into the 2m-deep drain.

The drain cover had been left open and there were no warning signs or barricades placed around the drain.

Chan said had turned a sharp corner, and the wall of a a condominium blocked her view of any danger ahead.

She claims that that there were metal cabinets in front of her and 3 PUB officers who blocked the pathway, so, she walked towards the gap in the middle of the pedestrian path and thereafter fell into the drain.

Chan was rescued by the workers, sent her to a nearby clinic for treatment.

She was later warded in Tan Tock Seng Hospital, where doctors found that she suffered trauma and contusions to her hip and a broken bone near her right ankle, among other injuries.

She was given 2 years and 10 months of leave by her psychiatrist.

Chan is seeking several million dollars in damages, including S$665,000 in special damages for past medical treament and other expenses.

She is claiming loss of income and potential for motherhood, psychiatric disorders, future medical costs, pain and suffering.

Chan said that the incident caused her to lose a Chief Financial Officer post which she was offered in 2016.

PUB said that on the day of the incident, 3 of its workers had opened the drain cover to inspect the drain’s physical dimensions.

Two of the workers entered the drain while the 3rd stood above to alert passers-by.

After the inspection, the officers stood next to the open drain cover to discuss if more checks were needed.
PUB said that the open drain would have been visible to any passer-by who kept a reasonable lookout.

PUB has denied any breach of duty of care, liability or negligence on its part.