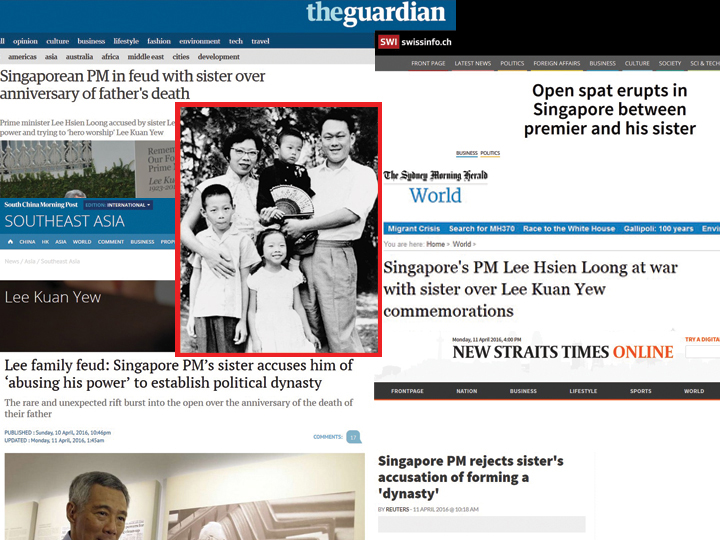 From Malaysia and China, to Australia, the UK and even Switzerland, it appears that the world is watching to see how this family feud between our Prime Minister and his younger sister will pan out.

Yesterday, Lee Wei Ling made public an email exchange between her and Straits Times editor Ivan Fernandez, in which she accused her brother of no qualms abusing his power” in order to stage a commemoration just a year after their father’s death.

This, she said, was was part of efforts by “the power that be” to “establish a dynasty”, and she vowed that she would not allow her father’s name to be “sullied” by a “dishonourable son”.

Lee had made the email exchange public, as part of her ongoing feud with SPH over what she sees as censorship of a story she had written about excessive “hero-worshipping” of her father, the late Lee Kuan Yew, one year after his death.

Regarding the first anniversary commemoration of the late Mr Lee’s death, he said:

“The Cabinet had discussed how we should mark the occasion. My advice was that we should leave it to ground-up efforts. Groups should keep their observances in proportion, and focused on the future.

“The Cabinet recognised the strong desire of many Singaporeans to show their respect for Mr Lee, and honour what he did for us. We reviewed the events and observances that different groups had planned, and agreed that they were generally appropriate. They expressed the sincerely felt sentiments of Singaporeans, which my Cabinet colleagues and I deeply appreciate.”

As for the notion of him trying to “build a dynasty”, he said:

“The idea that I should wish to establish a dynasty makes even less sense. Meritocracy is a fundamental value of our society, and neither I, the PAP, nor the Singapore public would tolerate any such attempt.”