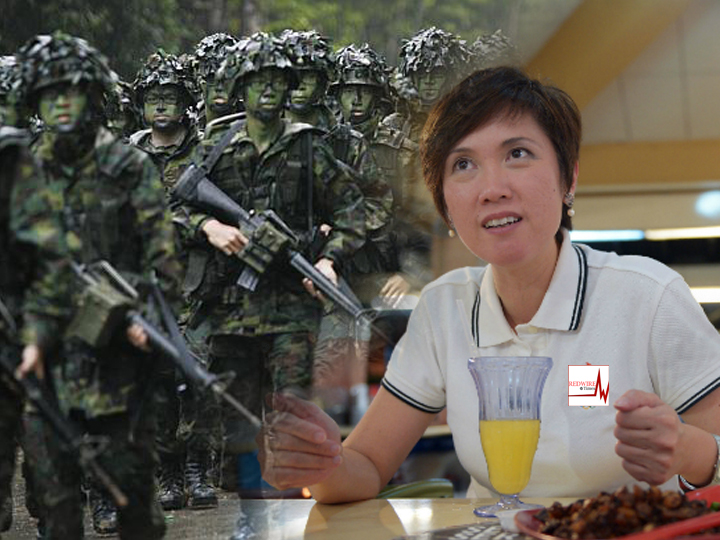 I refer to the recent comment by PAP MP Josephine Teo who said NSmen’s service for the nation cannot be measured in dollars and cents.

I was a clerk in a camp CCO when I was an NSF.

In my 2.5 years there, I witnessed not less than 20 soldiers who had to serve time in detention barracks for Absent without Official Leave (AWOL).

I had to prepare charge sheet, prepare statements, coordinate the Regimental Police so to prepare the AWOLee to face charge in the presence of a Senior Disciplinary Officer. After that was done, I had to tag along with the AWOLee to hand dockets and the relevant documents to Kranji where the detention barracks is located to complete the handover process.

I can confirm that the root cause of more than 70% of the AWOL cases was related to financial problems. These AWOLees came from complicated family and detested SAF because the allowances as a Private was pathetic They needed to work outside to boost their family income. Otherwise, how could the family survive on SAF allowance of barely $350 a month?

I talked to some of them. They book into camp but ended up having to constantly worry about bills at home. Some had ill-parents and younger siblings to take care of. Financially strapped, they AWOLed to moonlight. From their point of view, family should come first, and not SAF who pays pittance under the excuse of national service.

Why didn’t these soldiers seek financial assistance, you may ask. Those who served NS in the Army will know how much red-tape and the “world-class efficiency” in getting things done. One form had to be accompanied by documentary proof that your family is in hardship, and it also had to be passed through the chain-of-command. These soldiers who had problems tend to be storemen and drivers who have bad reputation in the army due to their background and tattoos. The S1 and chief clerks tend to view these soldiers as “gengsters” and “attitude problems”. So it ends up that these soldiers who had financial problems don’t see eye to eye with those doing administrative work which eventually delayed the financial assistance to the poor soldiers, making them more desperate to earn extra income for home.

PAP MP Josephine Teo said a solder’s service cannot be measured via monetary terms because it is a service for the nation.

Let me quote you article 2 from People’s Action Party party constitution: “The Party shall be a national movement dedicated to serving our nation and advancing the well-being of our people.”

The only difference one pays themselves millions a month to serve Singapore, the other was paid $350 allowance a month.

If PAP MPs do not know the reality on the ground, they should just keep their mouth shut. PAP MPs and Ministers who are being paid millions to serve the nation are not in moral high ground to dictate how Singaporean sons should spend their time serving the nation.

This letter writer has chosen to be identified as Your Obedient Soldier.
Send us your letters at mail@redwiretimes.com