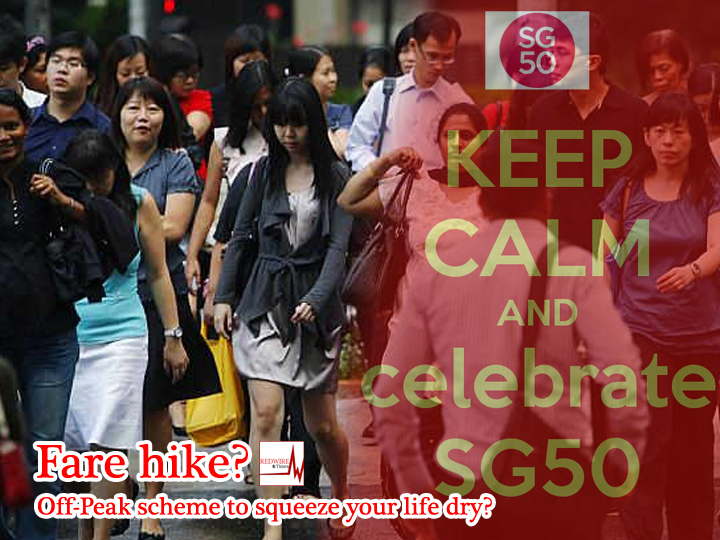 The government is now asking Singaporeans to travel at off-peak hours instead if they want to travel more cheaply.

That’s because for now,  Singaporeans and Permanent Residents have to spend S$120 to buy the Adult Monthly Travel Pass to enjoy unlimited bus and train rides, but they will pay S$80 for an off-peak pass.

Persons with Disabilities and senior citizens now have to spend S$60. An off-peak pass for them will cost S$40.

The new concession scheme will commence on 5 July 2015.

If you’re a PME, or like most other office workers who form the bulk of our economic digits, you’ll probably have to be plonked at your cubicle by 9am.

So what’s the chance you’ll get to enjoy the nice off-peak concession?

That’ll happen if you go to work earlier then. And assuming half a modest 30 minute journey, that means you should reach office at around 7am.

And, that also means you leave office at around 7.30pm, which makes for a nice 12.5hr work day.

How’s that for work-life balance?

Haven’t we seen this before when the ERP was implemented, such that certain gantries only switch off at 8pm, forcing those who drive to save money by going home late?

What happens if you but the off-peak card but decide midway through the day that you don’t want to stay back so late punching numbers?

You’ll have to either use an EZ-link card, or pay cash to buy one on the spot. Well, fares for that will now increase by up to 5 cents and 10 cents respectively in April, after the recently announced 2.8% fare hike.

So is this a sincere measure to help a Singaporean out, or is this an attempt to bank on temporary ignorance to score popularity points?

Already, Singaporeans work the longest hours in the world.

Meanwhile, our good friend in the West are enjoying life.