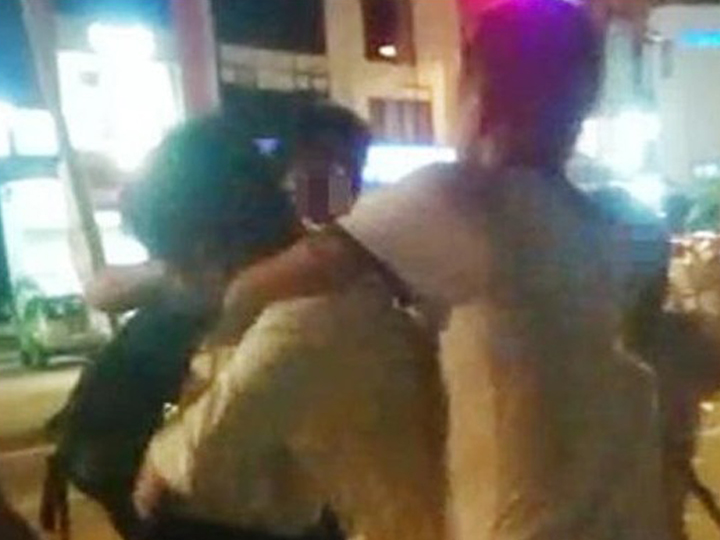 Last Friday (21 Jul), a Singaporean man got beaten up for doing exactly that!

The man and his brother were taking a bus to Johor Bahru via the Tuas Second Link.

As it was very crowded (you know lah, weekends go JB…) they queued for 2 hours just to get through Singapore customs, and were queuing again to board the bus to head to the Malaysia checkpoint.

A woman who looked about 20-year-old kept scolding the Singaporean man and telling him to move aside as he was standing in between her and her boyfriend.

But the man told her that everyone was queuing up and she had no right to cut the queue.

Still, the woman didn’t give up and squeezed past him to join her boyfriend and the brothers didn’t bother about her after that.

They reached AEON Bukit Indah at about 10.45pm and that’s when all hell broke loose.

As soon as they got off the bus, a group of 6 to 7 men attacked Mr No-Cut-Queue-Hor.

They pushed him to the ground and whacked him.

One of the men was seen wielding a wooden rod.

Seeing his younger brother getting beaten up, Elder Bro tried to stop the men but they just pushed him aside.

At first, the brothers didn’t know what the assault was about.

Then, they heard a voice say something along the lines of “who are you to behave so arrogantly towards my girlfriend” and realised it was all about the earlier customs queue-cutting incident.

Elder Bro called the police and yelled at the group, warning them that the police were on the way.

The group didn’t stop their vicious assault even when an off-duty policeman stepped forward to intervene.

Then, when police cars were about to arrive, the group of men ran away.

Except one man – Elder Bro managed to catch hold of Angry Boyfriend, who was subsequently arrested.

Mr No-Cut-Queue-Hor was sent to hospital in a bloodied state but survived the attack.