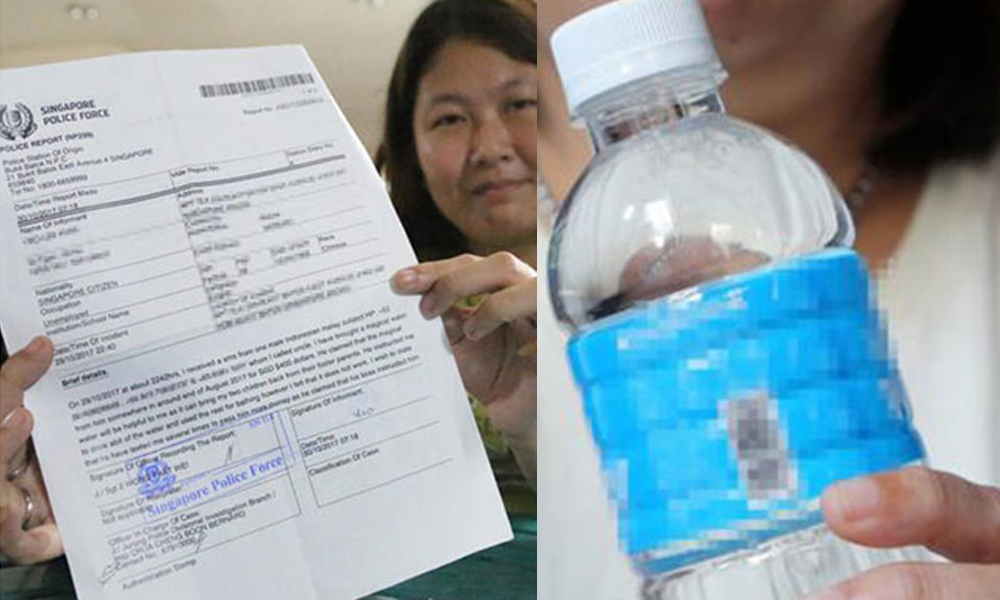 A woman and her sister paid S$1450 for “holy water” that supposedly comes from Indonesia, for the purpose of curing “bad luck”!

30-year-old Mdm Yang and her husband are both unemployed.

The couple, who live in Bukit Batok, depend on Mdm Yang’s sister to pay the bills.

They have 2 children, who are presently living with foster families.

According to Mdm Yang, her sister regularly buys things from a man who peddles goods at the void deck of her HDB flat block.

One day, her sister complained that the flat they lived in was “unclean”, saying that she felt something tugging at her feet while asleep.

That’s when, Mdm Yang said, her sister introduced her to the man who claimed to be a “spiritual consultant”.

“I don’t know how the man came to know about this, but he told my sister that he had a solution to her problems. My sister believed him and wanted me to go along to see him.”

The “spiritual consultant” told the sisters that he had “holy water” from Indonesia that could solve their problems – any problems at all.

The way to use the “holy water” – drink a spoonful from the bottle, then take a shower in the rest of the water.

The “holy water” looked no different from normal water, but Mdm Yang said the “spiritual consultant” was very persuasive.

“I thought of my two children, and hoped to use the power of the ‘holy water’ so they could return home.”

Mdm Yang and her sister spent S$1200 on 9 bottles of “holy water”, with an additional S$250 presumably spent on consultation fees.

However, it seems that the “holy water” didn’t work at curing the family’s bad luck.

After the sale, the “spiritual healer” even messaged Mdm Yang on her handphone and asked her for more money.

Mdm Yang asked him for a refund instead, but he told her to go ahead and report him to the police if she dared, and threatened to curse her if she didn’t give him more money.

Mdm Yang has since made a police report regarding the matter.