A so-called SMRT “Insider” has gone online to share his thoughts on how the rot starts at the bottom too despite the public blaming only top management for train breakdowns, accidents and disruptions.

Under the moniker “mrtguy”, this “insider” has made several claims, that if true, expose what SMRT CEO Desmond Kuek as termed “deep-seated cultural issues” plaguing the transport operator’s management of its train lines.

“mrtguy”, who claims he is a “station manager” has been actively posting and answering questions to do with SMRT for about 5 months now,

He has spoken on issues to do with SMRT operations, including issues such as the testing of the new signalling system, saying he wants to give an “insider” perspective on the problems SMRT is facing.

This is “mrtguy’s” latest “insider” perspective on the rot that he claims begins from the bottom, summarised in 5 points.

(1) Some staff cut corners and are damn slackers

“Actually, we have SOP. The SOP is quite long and covers almost all situation, even those that you have never experience before. You know why people don’t follow or cut corners on SOP? Because it’s boring and repetitive. Our station staff get lazy. Why must check XYZ every hour? Check if this thing locked? No need lah, won’t happen one. Limpeh work for 25 years NEVER happen, don’t worry! At least according to one of my colleagues. Some of them have worked for 30 years in the company and yet, they are still slacking off. Yes, 30 years. Old old birds, from the time where we got wear epaulets on grey shirt.”

“You might be thinking: Okay lah, people get bored with repetitive stuff. Men would know from NS, it gets boring after the 200th time you go patrol the camp. But this is getting out of hand. Some of my colleagues, who working in station, go sleep for like a few hours every shift. Sleep, play games or even just lepak. Some are still hardworking, even though they sleep, but some really cmi. One station the aircon went out, the SM did not deploy fans, because want to sleep. Also, other stations had things where the station staff go handle “suspicious articles” like as if not suspicious. What if that thing explode? I don’t want to imagine.”

“Sometimes it even gets criminal. You know why LTA suddenly got idea to go cashless by 2020? It’s not smart nation, that is just excuse for covering up something worse. Because station staff always “borrow” money from the PSC cash drawer to buy lunch/dinner/groceries and then they either: lie on the cash report or they blame other staff for the shortage. That is what I suspect is true reason and there was this incident in the news where the Tanah Merah SM stole $20k from the PSC.”

“They are not scared. Because every time got problem, CEO and top management, those university educated people, get the blame. They all attend the conferences and kena sai from public. We all are the ones who did it, but we never kena, only cut bonus or kena “strongly worded” email. Yes, maybe the pump incident they got, because that is almost criminal. But most of the time, our uncle Desmond and Khaw take the blame. We all don’t. Sometimes like ironic because the passengers give gifts to staff who I know are lazy. They all also cannot fire because: we all collude with our supervisors, who is usually someone we know who got promoted or they have no proof one. If got proof also, one of the colleagues say he gonna post on social media and shame SMRT and their million dollar management for firing someone who is working very hard to feed his family, even though I know he always cut corners and slack off. You know what? Singaporeans will accept the story, because blue collar worker kena fired by men in white.”

“The SMRT is just basically a swamp filled with leeches. Top to bottom, all of them like your NSmen: lazy, chao keng, siam and arrow people. People tell me they should replace Desmond with HK/JP/don’t know what CEO. But for what? Some colleagues even got the cheek to say: “better lah, cos japan ceo always take blame and they cut salary. Shiok, still can enjoy bonus.” and that cos Japan companies like to shame workers by removing responsibilities: “shiok ah. Don’t need to do work still get paid”. How to fix liddat? You need to remove this people, they already got the mindset of not doing work.”

“I actually support that idea, because they all are at least hard working and if they don’t do work, they have to leave Singapore. My colleagues all jealous when the FT gets award by SMRT, but my personal experience is, at least they do their work and they don’t go against everyone. I not saying that I want FT to work, but it’s actually better for the train system.”

These sentiments were echoed by “mrtguy” in a post in early October:

“I am working at SMRT. It’s not only management, it’s old bird engineers/station managers (they all not scholars or even uni grads, so it’s not parachute people) with 20-30 years experience who slack off and say things like “aiyah, we never check for 20 years, no problem what! don’t spoil market and check.”. I not saying everyone is like that, but these few people are the ones who risk commuter’s lives.

The previous CEO, yes, it’s good that she’s out, but the people with previous CEO’s mindset (engineers, technicians and station managers) should also go out. Public are hung up about top management, but they dunno that the reason why the trains keep breaking down again and again is because of complacency of people (especially very experienced people) doing the actual work. Those technicians or station managers who just lepak in staff room and don’t bother following SOP.”

Disclaimer: We don’t know who “mrtguy” is, or whether he is an SMRT staff or Yishun siao lang (or both). He could be talking cock until the khaws come home. 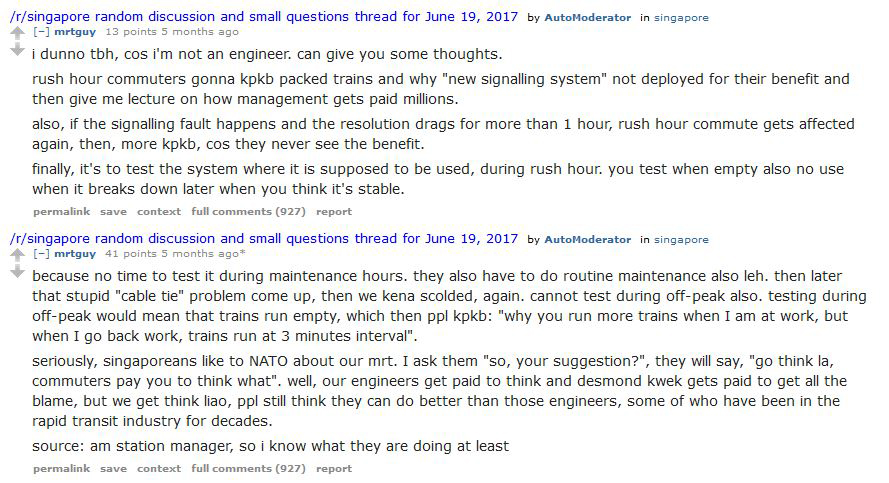