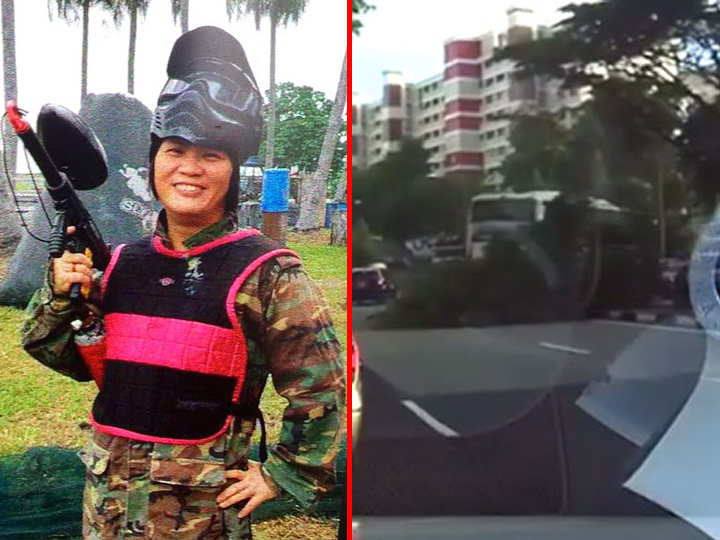 A private bus that mounted a curb crashed into 47-year-old Mdm Wong Lai Cheng and killed her last Thursday.

The incident was widely reported in state media.

But one thing has gotten Mdm Wong’s daughter, Chua Hanyi – the publishing of false details by an SPH paper, and the unrepentant stance of that paper when asked to make amendments.

That paper happens to be Shin Min Daily News.

According to Chua, Shin Min had included in a story about the crash that her father had “cried out distraughtly that my mother was battling cancer”.

Chua says that her late mother never had cancer, and the false report caused her family a lot of unhappiness as relatives came a-asking.

Chua added that she called up Shin Min to correct his, but they remained “negligent to the additional sorrow my family is going through.”

The incident led to questions over the integrity of state media new agencies, and the amount of balls it has to conduct such “cleansing duties” while warning the public not to trust any other local media outlet besides, well, state media.

This is Ms Chua’s full account of the distress Shin Min has caused her family:

“I am Chua Hanyi, the daughter of deceased Mrs Chua Wong Lai Cheng who passed away in a fatal accident on 12th January 2017 along Pioneer Road.

While I appreciate the many accounts of my mother’s kindheartedness and acknowledge factual details of the event, I would like to clarify certain details that have been falsely reported and have caused much hurt to my father and I.

Specifically, this is a clarification of a falsely reported detail from Shin Min Daily News which claimed my father had cried out distraughtly that my mother was battling cancer.

My mother, as many newspapers have factually reported, was cycling home after work where my father and I were waiting to have dinner together.

She told me that she will be going to buy some ingredients before heading back, and told me to cook rice. But after quite some time, she was still not home and was totally uncontactable. As we grew more anxious, my father and I decided to drive out to her workplace to look for her, worrying that something had happened.

On the way there, we met numerous road blocks which exacerbated our anxiety. Only upon reaching the scene of the accident did we find out my mother was the only fatality in the accident.

My mother was not battling any form of cancer. She was a normal healthy individual, simply making her way home to have dinner with her family. Realising that this false news has been virulently spread and receiving well-wishes of my mother’s suffering being minimised is hurtful, especially to my father.

Ever despite calling up Shin Min Daily News to correct this, they are negligent to the additional sorrow my family is going through. My father in particular has had to deal with many friends and relatives inquiring about my mother’s supposed cancer. This has caused him much unnecessary added unhappiness which really saddens me terribly.

My purpose in writing this post is not only to clarify this falsehood, but also to appeal to the integrity — whether existent or non-existent, of newspapers, specifically those which make-up details in order to generate more attention for the reported news.

My family is only one of the victims of falsely reported news, while it seems like just an additional line of information that sparks sympathy amongst members of the public, it is a line that has deeply hurt my family members, in particular my father, and I hope to clarify it through this post.

Once more I appreciate all the well-wishes and I hope that with this clarification made, no other falsehood will be fabricated by any news reporting outlet to hurt my family, or any other families in the future. Thank you.