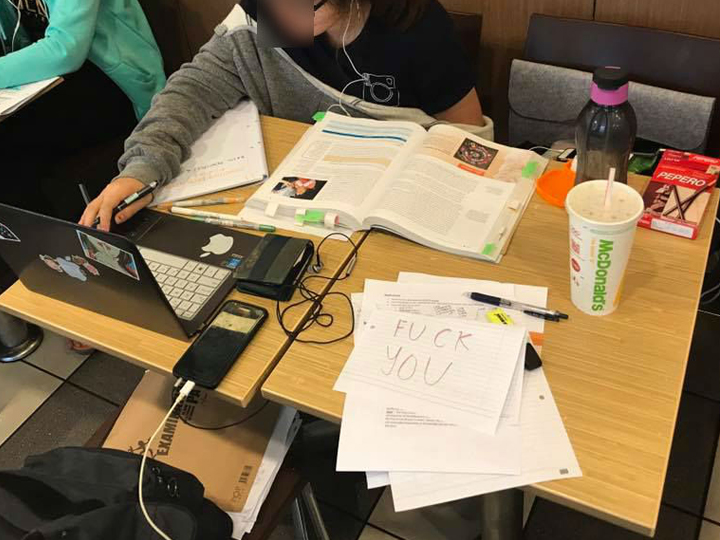 An angry MacDonald’s patron has hit out at a student for a vulgar sign which was placed on a table he believes she were trying to “chope”.

Jerome Heng said that he and his wife and son were about to have a meal at the MacDonald’s outlet at United Square.

While he queued up to buy food, his wife looked around for seats.

He said that a student sitting at a table had left that “F*ck You” sign on a table next to them to prevent others from using the table.

Jerome said that he believes so because when his wife walked past the students the first time, the sign wasn’t there.

He said that the gesture was directed at her as a means of “choping” the table.

“That’s our new generation for you . Hogging seats during peak hours at Macdonald , and sending an empathic msg to all of us not to disturb her because she don’t gives a shit. At a joint where it’s fill with young kids somemore. Come I clap for you. By the way , I don’t really care about the seats hogging , I am upset by the F word which is visible to ALL THE YOUNG CHILDREN HERE”

Jerome says that “choping” of seats aside, the student should not have used vulgar language as there were children around.

It’s uncertain whether “choping” was really the reason for the sign.