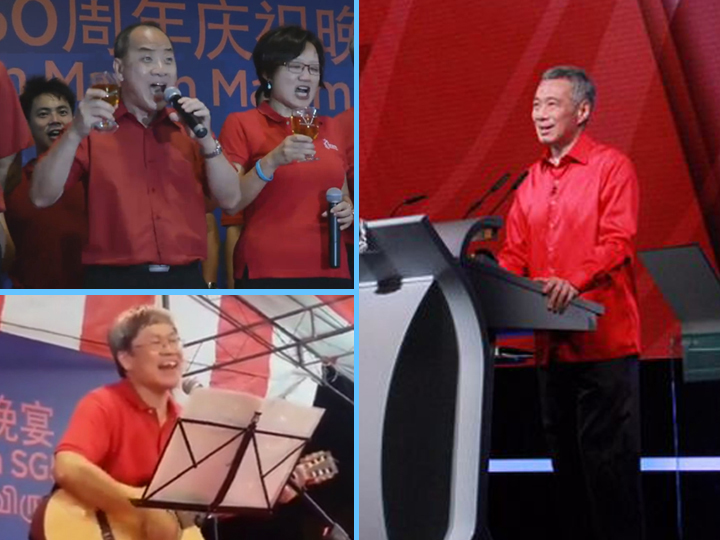 RONALD LEE: Shiok ah! Instead of having to listen to some boring (albeit important) speech by the prime minister, some 1800 residents feasted at an open field in Hougang Central, as part of the Workers’ Party’s SG50 Celebration Dinner.

Instead of Kit Chan belting out “Home”,  Png Eng Huat gave diners one hell of a “Speedy Gonzales” performance (don’t go and disturb Mexican girls hor, Mr Png, later got another by-election!) The Hougang SMC MP could very well have sang Fred Astaire’s “They Can’t Take That Away from Me”.

The Workers’ Party members skipped the National Day Rally – the first time since 2011 – preferring to mingle and dine with residents.  There was no political rhetoric, and if not paying attention, one would have mistaken the celebration for a getai dinner.

PM Lee was all polish and pomp, dishing out anecdotes charting the progress of Singapore, invoking the memory of the late Lee Kuan Yew in an attempt to convince Singaporeans that the future is bright, and of course, doling out the goodies.

But while my brother happily went to kaypoh at the WP dinner, I sat back and watched the rally from my Marine Parade flat – PM talk, must listen lah. I could hear my next-door neighbour saying, possibly to his wife, “Everything also Lee Kuan Yew. March die, now still Lee Kuan Yew. Enough or not?” When PM Lee talked about housing grants, my “ancient” elderly father groaned “The gahmen give you this now, later sure take back other things. You better grab what you can first.”

I think my other neighbour went for Chilli Crab, because who cares about PAP or WP when there is good makan right? The only P people care about is “who Paying ah”?

No doubt, the Prime Minister won when it came to engaging the minds of Singaporeans. Speaking to my friends in office today, there was definitely a lot of consideration about upcoming measures. But I sensed that a lot of the talk centered on very bread-and-butter issues. They shared my father’s sentiment – how can we take more and more instead of always pay and pay?

That was what set people thinking, and therein lay the problem – while the government has built a multi-racial society, it has also spawned a mercilessly mercenary culture. Talk is always about grabbing money, complaints are always about not having enough of it.

Can you blame them? How many enter politics with an eye on a monthly S$15,000 MP salary, or million-dollar annual ministerial wage? How many Singaporeans put their family on the backburner to climb the corporate ladder, because they need to provide for their families?

My brother came home half-drunk, and was very happy to be part of the WP celebrations even though he didn’t get to eat anything. When he told me about all the nonsense he talked to people about, and the funny little incidents that he saw from afar, I wish I had skipped the rally and went with him (but then my father would cow beh at me for leaving him home alone).

I know who Ah Di will be voting for in the coming election. As for me, I’m undecided because Marine Parade is overall a nice place to live, and I am a simple person without any big ticket needs like a big car or a holiday 3 times a year. Maybe it’s down to age.

There’s no doubt the PM Lee has won the minds of the people. The question is which way he has set them thinking. As for the WP, they’ve secured the hearts of many people with one light-hearted dinner, people who will go on to influence others to come under the Hammer.

That’s something the “natural aristocracy” should understand – we are Singaporeans and we are human. As we push forward, we also need our space and time to unwind. There’s only so much shoving one can do.

At times, the heart overrules the head.