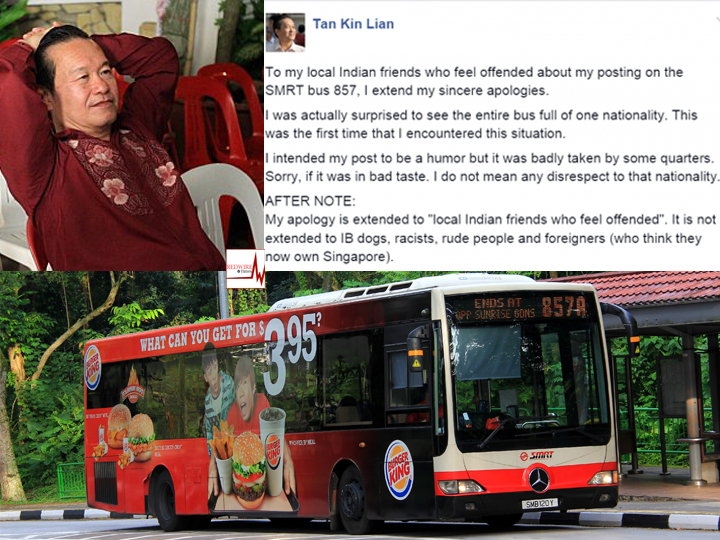 Tan Kin Lian has apologised for his comments about boarding a bus in Singapore and finding himself in “Mumbai”. Many had found the comments on Facebook racist, but there were also others who defended Mr Tan.

But in a further scathing attack on his critics, Mr Tan also added that his apology isn’t extended to “ib dogs, racists, rude people and foreigners who think they own Singapore”.

“To my local Indian friends who feel offended about my posting on the SMRT bus 857, I extend my sincere apologies.

I was actually surprised to see the entire bus full of one nationality. This was the first time that I encountered this situation.

I intended my post to be a humor but it was badly taken by some quarters. Sorry, if it was in bad taste. I do not mean any disrespect to that nationality.

AFTER NOTE:
My apology is extended to “local Indian friends who feel offended”. It is not extended to IB dogs, racists, rude people and foreigners (who think they now own Singapore).”

Edz Ello’s posts wishing Singaporeans death, and wanting the Philippines to takeover Singapore went viral online, and led to his sacking from TTSH.

He claimed that his account was hacked, but was later discovered to have also posted several comments mocking Islam.