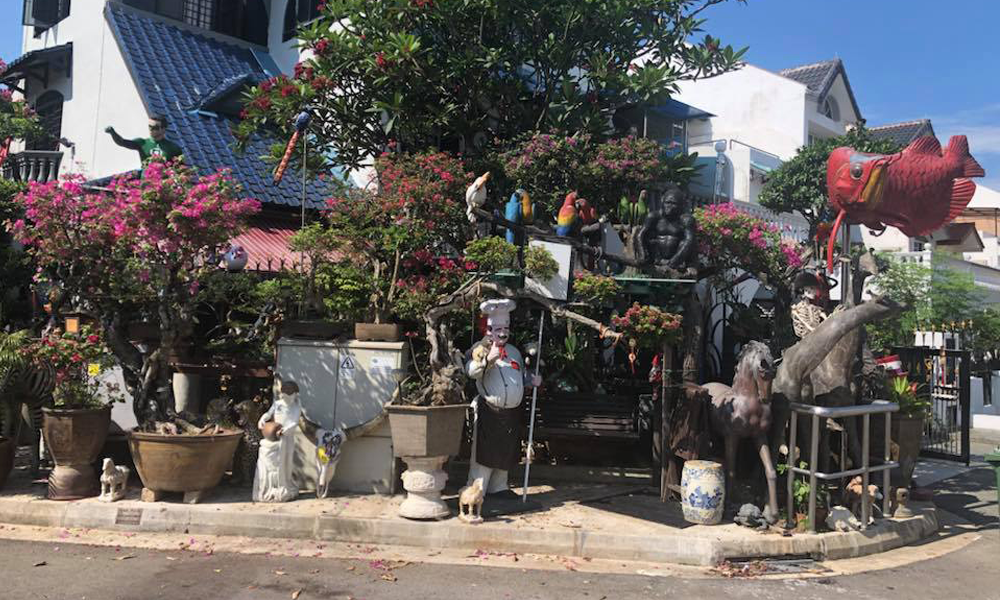 “This is the result of one bad and jealous neighbour that his continuous complaints to LTA now forces the removal of community benches and potted plants.”

A resident of a semi-detached house in Tanah Merah who spent S$150,000 creating a “mini theme park” alleges that he was forced to tear down the park because of a festering dispute with Mediacorp actor Chua En Lai’s family.

All this, because of an insurance claim against Chua after a car accident.

63-year-old Cheong Boo Wee, who has been staying at his Jalan Chempaka Kuning house for 25 years, said he built the “mini theme park” park in conjunction with the Community in Bloom programme launched by the National Parks Board (NParks) back in 2014.

The aim – to create a better common environment and foster community spirit. 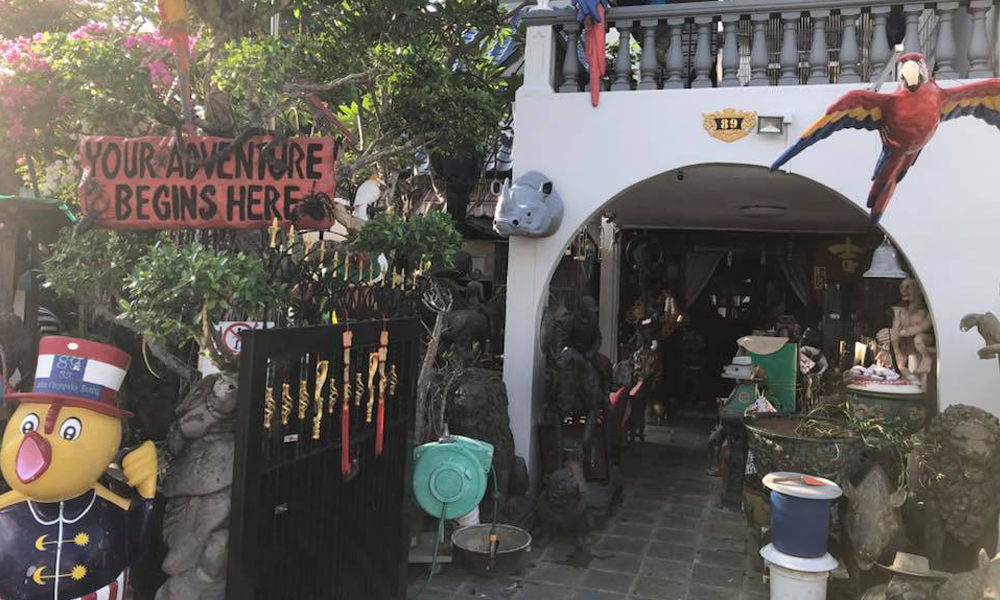 Cheong developed a garden, complete with benches and quirky animal statues, along the common pathway outside his home while he turned his courtyard into a mini-zoo which had some 30 birds.

But, Cheong said that all that came crashing down following an incident in 2015, when Chua Enlai reversed his car into Cheong’s.

Cheong claimed that the Chua’s family took offence at a subsequent insurance claim for damages, and Chua’s father made it his mission to get the “mini theme park” destroyed. 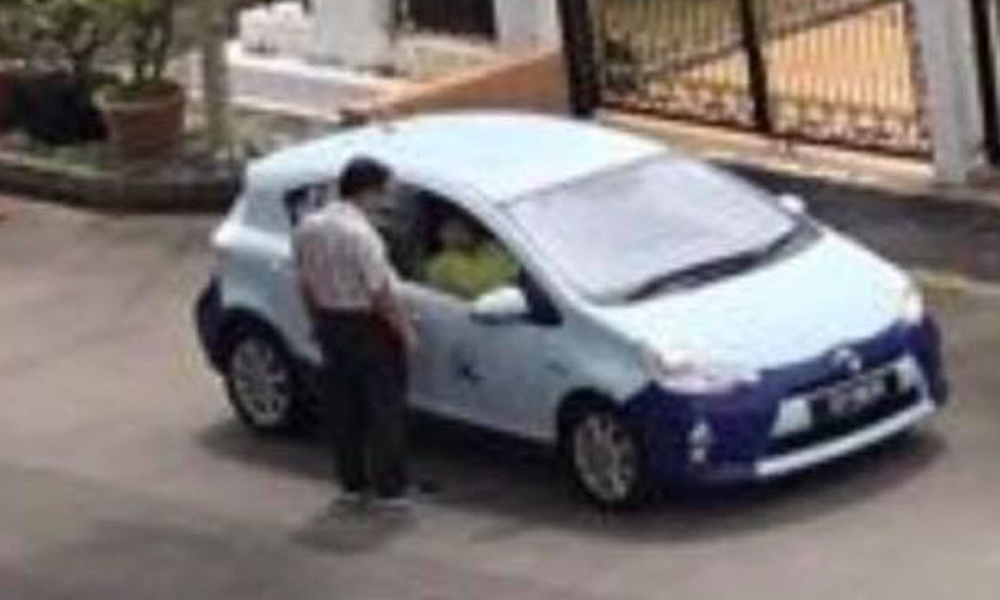 “Things started in March 2015 with his Son, Chua Enlai reversing his car and hit mine which was parked in front of my house. He just drove off. The next day, we checked our cctv recording and found he hit my car. We approached the old man who told us his Son said no, he did not. So we made report to the police and our insurance company on a hit and ran accident. Initially his insurance company wanted to pay after asking us to bring our car down for survey. But unfortunately they rejected our claimed because they claimed their insured told them he didn’t hit. So my insurance workshop filed a civil suit against him.

It took two years with evidence from my cctv video recording that his lawyer has to accept liability. Court asked them to pay. Disappointed, integrity, trust and honesty of someone is lost. Then around 3rd Q of 2015, there were some misunderstanding on his feeding of stray cats. He wanted to punch me and said that if I want to play with him using police, he will play with me with his influence. He claimed he was formerly from PM office. LTA and our MP told me that complaints started in 2015.” 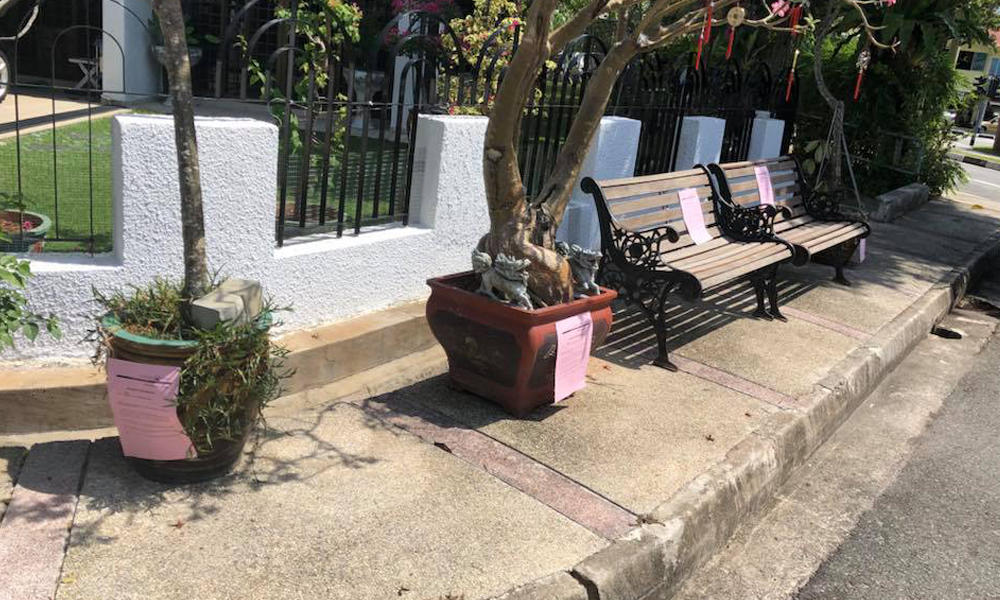 Cheong said that in Feb 2017, he received a letter from LTA to remove articles on the road, to which he complied.

But in May 2018, the LTA acted on a complaint in May 2018 from one of Cheong’s neighbours about his sculptures blocking the public walkway and told him to remove all articles placed outside his home.

Cheong said that in a meeting with government agencies about his “mini theme park”, he felt intimidated by a LTA officer who claimed he was formerly from the police Criminal Investigation Department.

“In early May, our MP set up meeting with LTA, NParks, Bedok police station inspector, some GRLs and me. I explained the circumstances that led to the complaints. The LTA officer’s statement to me was he was formerly from CID and now with LTA. Honestly I find his statement about CID is irrelevant as our discussion is supposed to discuss on possibility of a win-win situation. Also his statement, I strongly feel is intimidating and could put me in fear if my background in my early days were notorious. This old man (Chua’s father) told a neighbour and claimed his father-in-law was formerly a very TOP man in CID. I wonder if there were connections.” 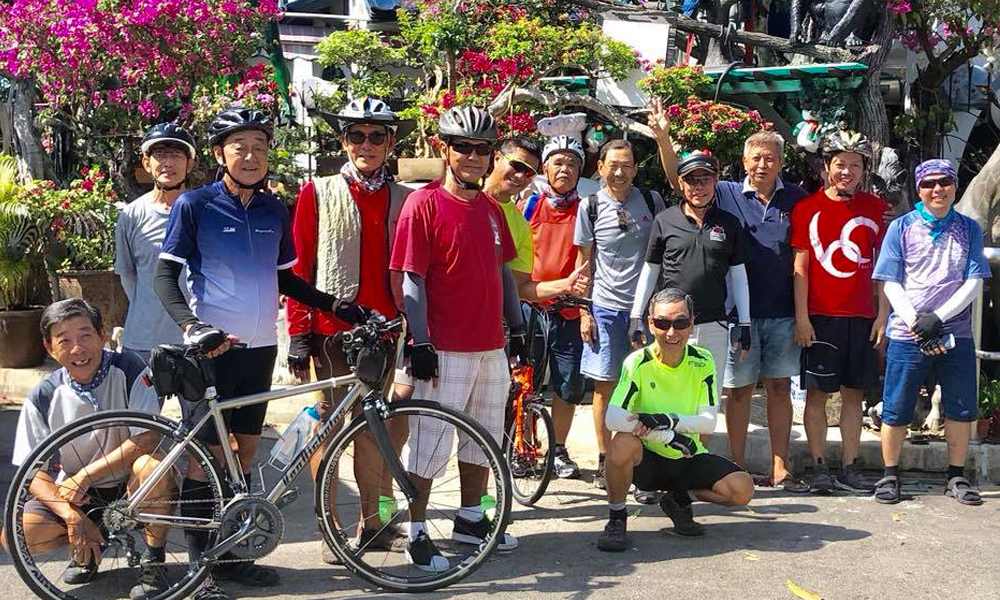 Jalan Chempaka Kuning have expressed dismay at the dismantling of Cheong’s “mini theme park”, which they say brought lift to the neighbourhood.

They say that it was an area where neighbours could bond, and even people from outside the estate would flock down to see the “mini theme park” out of curiosity, adding to a bustling atmosphere.

Cheong says that was the spirit on which he built his park, and wonders whether any other factors were at play leading up to its destruction.

“Our government encourages keeping our area green with the campaign of community in bloom, Garden by the Bay, rooftop gardens, and kampung spirit and neighbourhood bonding where seniors should spend time with neighbours to bond. Unfortunately it appears some of their agencies are doing things differently. LTA told me, if no one complain, we will not act… Is it because of connections?”