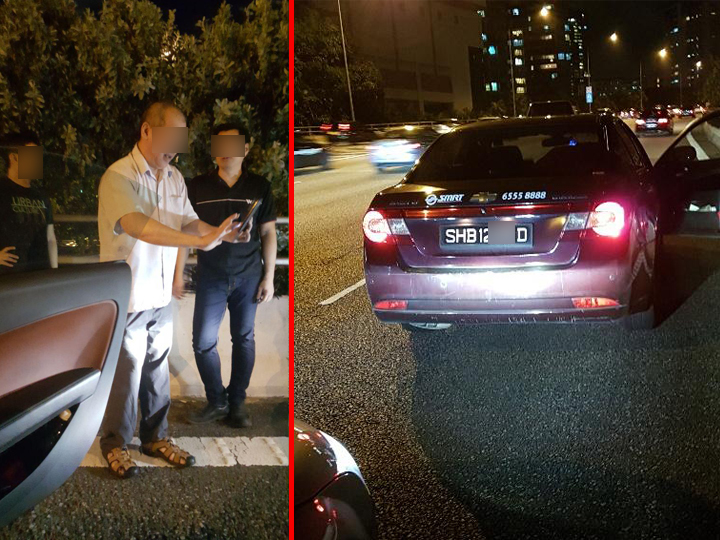 A taxi driver has been accused of faking a traffic accident to extort S$1450 in insurance claims from another motorist.

Ros shared this story on Friday of how the driver claimed he was a victim of a traffic accident which didn’t involve him at all.

She said her husband was driving along the CTE with her in the passenger seat, when the taxi “suddenly jammed braked”.

Their car reportedly stopped a distance behind the taxi, but got hit in the back by another car.

As Ros’s husband and the other driver exchanged particulars for insurance claims purposes, the taxi driver approached and claimed his taxi had been hit in the bumper by their car.

Ros says their car stopped a distance from the taxi and could not have possibly hit it.

“Please compare it to the picture of our car and the car behind us which kissed our bum (last pic).” 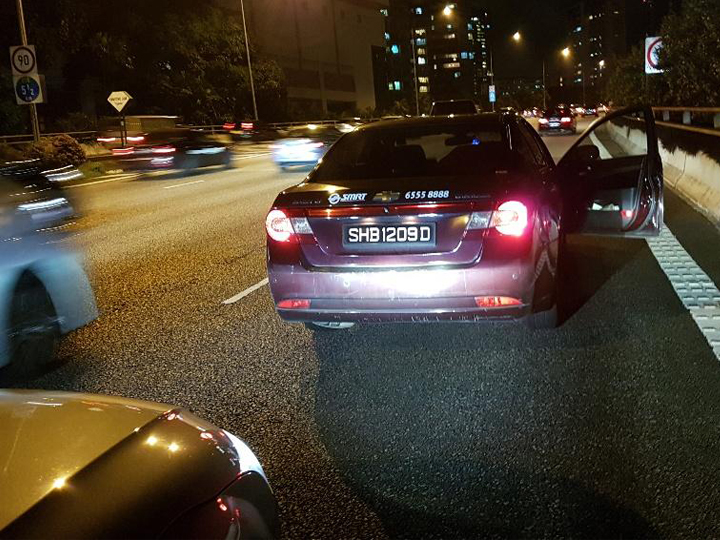 Front of our car: 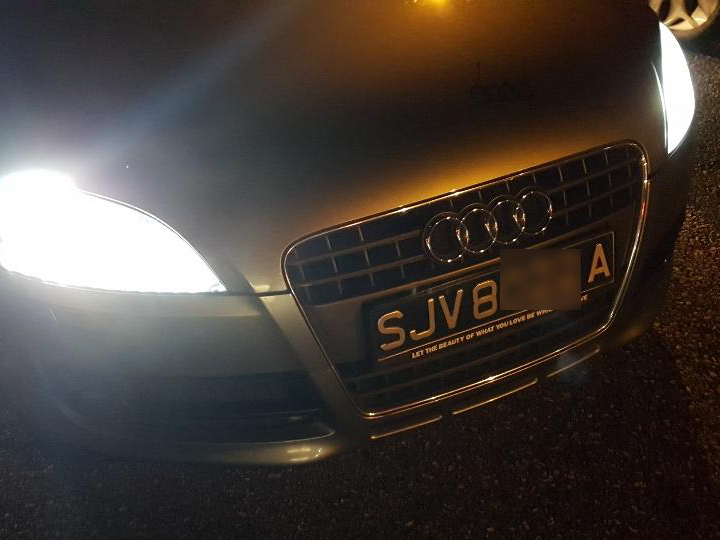 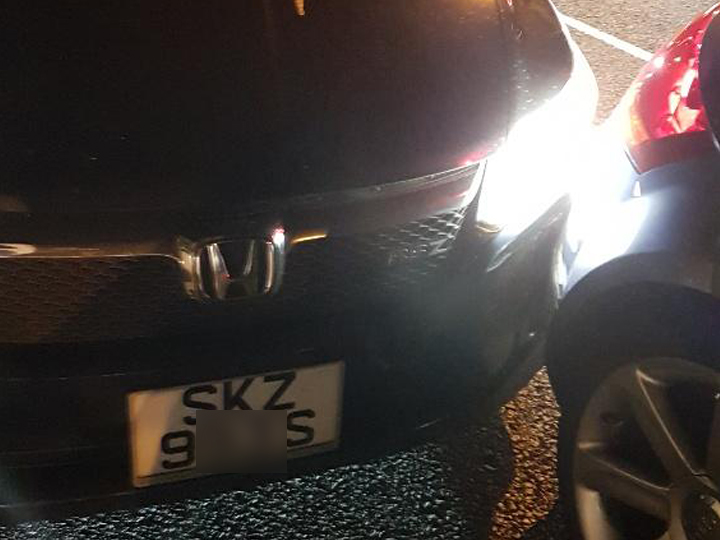 Ros was later slapped with this insurance claim: 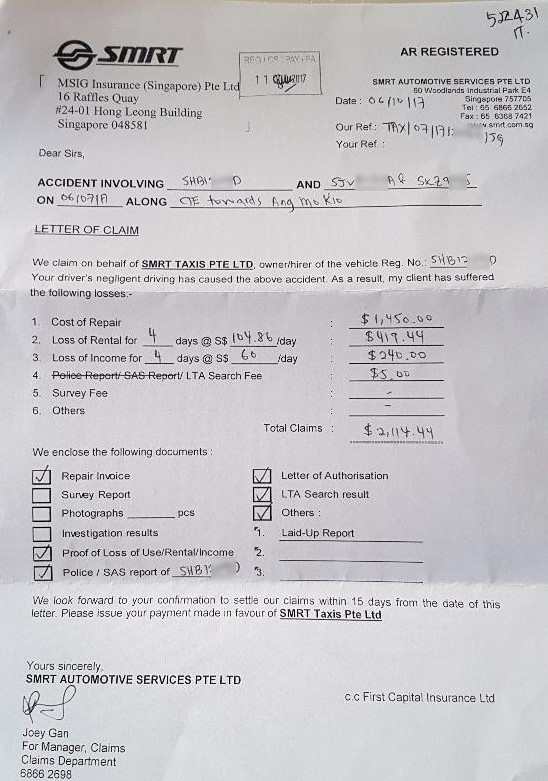 “Cost of repair $1,450? For an accident that never even happened??? For your reference, the repair cost for our car’s bummer that was hit by Mr Ang’s car from behind was only $250. And that is for an accident that is obvious from the pics above.

This taxi driver has obviously filed a fake insurance claim! Mr Ang happened to have a passenger in his car as well, and both of them have kindly offered to be witnesses.”

Ros has made a police report against the taxi driver.

“It is because of rogue drivers like him that car insurance premiums escalate and the reputation and image of SMRT taxi drivers is tarnished.” 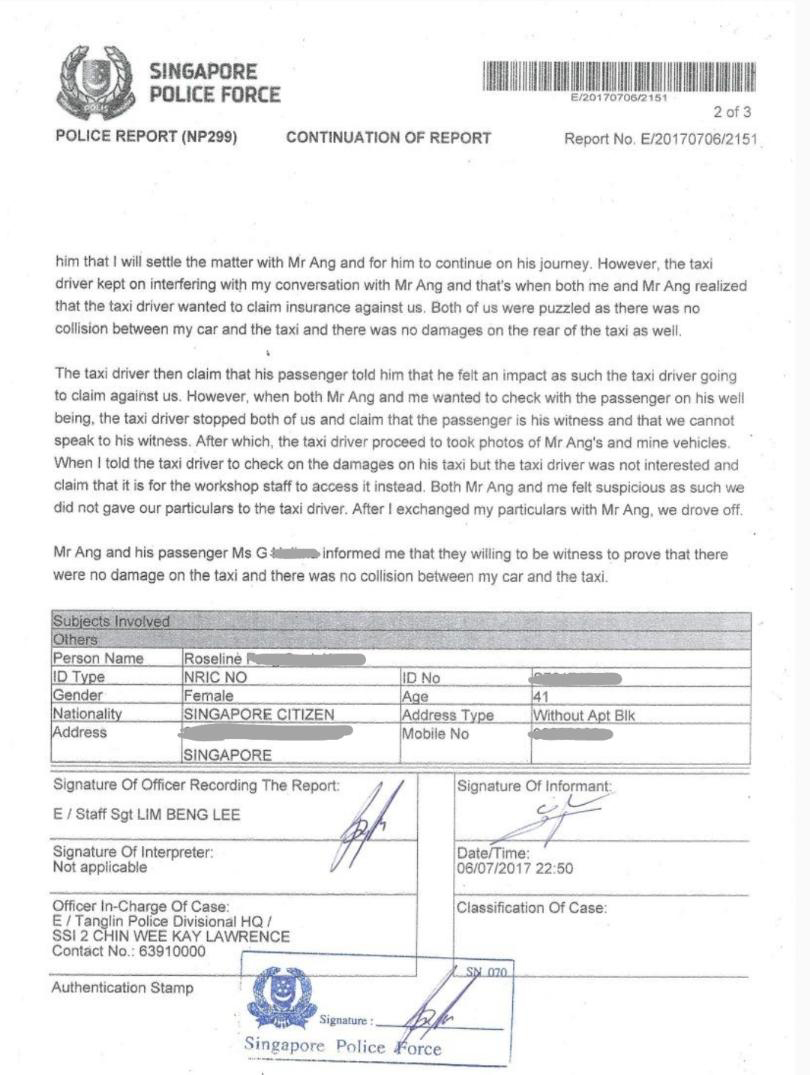 “I would like to bring to your attention on 1 of your taxi drivers with car plate SHB 12XXD, whom whom have engineered a scam “accident” in order to cheat money out of the insurance company.

On 6 July 2017 around 9pm, my husband (Mr Chia) and me were in our car along CTE heading home. We were on the expressway behind vehicle SHB 12XXD when the taxi driver suddenly jammed braked. My husband, who was driving the car, thankfully managed to brake in time. However, the car behind us unfortunately didn’t manage to stop in time and it hit us. Thankfully, no one was injured and there was only some minor scratches on our car, as the impact was rather small.

My husband (Mr Chia) and the driver behind us (Mr Ang), got out of the car and started discussing on resolving the accident they had. The taxi driver got out of his taxi, approached them and told them “I am very familiar with such cases. Let’s claim on our own.”

Feeling puzzled, we initially thought the taxi driver was trying to be helpful in dishing out advice. After all, this was none of his concern since his car was not hit at all. My husband then told the tax driver that they (he and Mr Ang) will settle among themselves. But the taxi driver continued interfering in their conversation and when my husband told him not to interfere as this was none of his business, he got angry.

While trying to calm the taxi driver down, Mr Ang also told the taxi driver that he (Mr Ang) will settle with my husband himself. Interestingly, all throughout this time, instead of checking if there are any damages on his taxi, the taxi driver was more interested in their conversation. After some time, he finally revealed the real reason why he was trying to butt into a conversation that had nothing to do with him.

He actually claimed that we hit his car and wanted to claim insurance against us!

All of us were very shocked at his accusation and Mr Ang immediately defended us. The taxi driver even had the cheek to claim that his passenger in his car felt the impact too and his passenger can be his witness. When my husband and Mr Ang tried to walk over to the taxi to check with the passenger, the taxi driver stopped them and said “you are not allowed to speak to my witness”.

Truth is, I was seated in the front passenger seat; and when my husband stepped on the brake, I was looking ahead all the time. I swear we did not even touch the taxi one bit.

When I spoke up, the taxi driver told me I am related to my husband, so I cannot be a witness. At this point, after witnessing how this taxi driver was trying to be a bully; Mr Ang, who is a complete stranger to us, spoke up for us and said he will be our witness if the taxi driver claimed against us.

When we tried to leave the scene after exchanging contact with Mr Ang, the taxi driver tried to stop us and demanded that we have to give him our details before we can leave. Since we did not have any accident with him, we refused to give in. He threatened to call the police and we said: “Go ahead. In fact, we are planning to make a police report as well.” In the end, he had no choice but to let us go.

To safeguard ourselves, we decided to make a police report immediately after we drove off. Likewise for Mr Ang. Attached is a copy of the police report we have made that very same day. The police assured us that they will investigate and see if they can find any evidence of the taxi driver trying to scam the insurance company.

1) The taxi driver said he jammed braked because the car in front of him braked suddenly, but has already drove off. He said he has a camera in his car, so SMRT, please investigate the footage.

3) The taxi driver was more interested to tell us that he will file an insurance claim against us than to ascertain the true extent of his “damages”. When an accident occurs, what is the first thing most drivers will do? Won’t you examine the car first just to check on the extent of the damage before deciding what to do?

4) I was sitting in the passenger seat and took photos of the distance between his car and our car, and also pictures of the back of his car and the front of our car. Looking at these pictures, how is it possible that an “accident” occurred? Please compare it to the picture of our car and the car behind us which kissed our bum (last pic).

It is because of rogue drivers like him that car insurance premiums escalate and the reputation and image of SMRT taxi drivers is tarnished. His behavior is not only rude but he behaves like a gangster.

Dear SMRT and police officer, I strongly appeal to you to please look into this matter seriously and make a thorough investigation; so as not to allow errant taxi drivers as such to get away from trying to make a profit out of the insurance companies and implicate innocent victims. Excusing this kind of behavior is a threat to public interest and security. If he can simply get away with this, what is stopping him from repeating it again to another innocent driver?

Cost of repair $1,450? For an accident that never even happened??? For your reference, the repair cost for our car’s bummer that was hit by Mr Ang’s car from behind was only $250. And that is for an accident that is obvious from the pics above.

This taxi driver has obviously filed a fake insurance claim! Mr Ang happened to have a passenger in his car as well, and both of them have kindly offered to be witnesses.”