RONALD LEE: The 32-metre Tembusu tree that collapsed on Saturday was one of 40 heritage trees in our Botanic Gardens

Standing for 270 years now, the tree featured heavily in our bid to get the Gardens recognised as a Unesco World Heritage Site.

It’s so iconic that it even has a place on our S$5 notes.

In short, it can’t simply be allowed to collapse unless it was deliberately destroyed due to unexpected catastrophe.

Just imagine what a laughing Donald Trump would be if the Statue of Liberty collapsed due to strong waves or for whatever else reason he can trump up.

Now, seemingly through its own volition, one of our Singapore icons has been levelled. 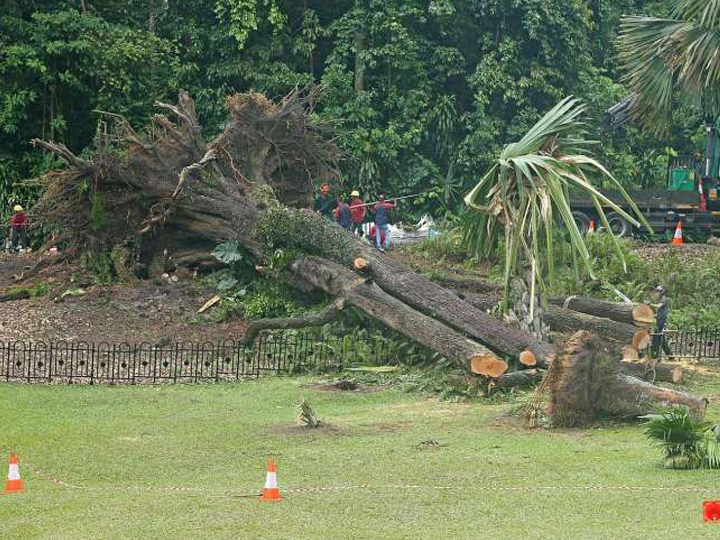 Chatter has centered on whether there was negligence on the part of NParks, which comes under the supervision of the Ministry of National Development.

NParks after all has been criticised following a series of near-lethal tree accidents involving fallen trees and branches.

Like this incident where a taxi was crushed by a fallen tree.

Or this time when a motorcyclist was put into a coma after being hit by a fallen branch.

And in another recent collapse, huge trees at Braddell toppled and destroyed part of an overhead bridge.

The Tembusu, an age-old relic, was an accident waiting to happen.

As we’ve mentioned time and time again after so many “acts of God”, NParks has to step up – clearly its “due diligence” can’t cut it.

So what has NParks done to ensure our iconic Tembusu, if not other lesser worthy trees, would stay up?

The toppled Tembusu was last checked by NParks in September 2016 and found it to be healthy.

Those checks were performed on the root collar, anchoring roots, crown, trunk and signs of soil movement

The tree was inspected twice a year, which is of a higher frequency compared to other trees in the park and also had a lightning conductor in case Thor struck.

Since December 2013, a cordon was placed around the Tembusu to prevent visitors from getting too close to it and affecting the growth of its roots.

A new S$25,000 structure was also put in place to prop up a branch that was sagging.

Still, none of these measures were enough to save the Tembusu or the woman who was unfortunately crushed to death amidst its collapse.

Could more have been done to prevent such a tragedy and also to avoid the embarrassing loss of a national monument?

The government is more known for its reactiveness than its initiative.

Just look at the flooding incidents in recent months.

Despite the “once in 50 years, Yaacob?” jibe, flooding isn’t new to us and has been increasing in incidence since 2013.

Tanjong Pagar, Orchard Rd… they’ve all been hit consistently, and they were again earlier this month.

Despite being able to see the red flags and anticipate the weather changes in the years ahead, it seems that agencies aren’t able to proactively and effectively implement solutions to stem problems.

Even when those problems are chronic.

So what about the Tembusu topple?

Let’s hope investigations don’t turn up that our iconic heritage tree collapsed due to heavy wind and rain.

That would be an abject embarrassment.