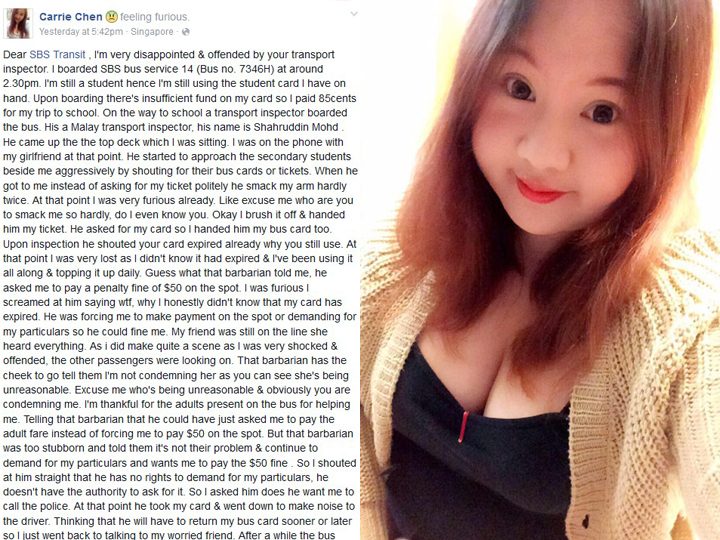 Kaplan College Student Carrie Chen has accused a “barbaric” bus inspector of humiliating her on board a bus and has called for SBS Transit to suspend him.

Chen says that she had boarded bus 14 when she realised that she had insufficient funds on her student card. Because of that, she paid an additional 85 cents for the trip.

However, a bus inspector who boarded midway through her bus ride accused of trying to hitch a free ride and demanded she pay a S$50 fine on the spot.

Following a commotion, Chen says the bus inspector got all passengers on board to exit the bus, and she rushed out as well after demanding to leave.

She says she posted an account of the alleged incident on Facebook after failing to reach SBS Transit.

This is her story:

“Dear SBS Transit , I’m very disappointed & offended by your transport inspector. I boarded SBS bus service 14 (Bus no. 7346H) at around 2.30pm. I’m still a student hence I’m still using the student card I have on hand. Upon boarding there’s insufficient fund on my card so I paid 85cents for my trip to school. On the way to school a transport inspector boarded the bus. His a Malay transport inspector, his name is Shahruddin Mohd .

He came up the the top deck which I was sitting. I was on the phone with my girlfriend at that point. He started to approach the secondary students beside me aggressively by shouting for their bus cards or tickets. When he got to me instead of asking for my ticket politely he smack my arm hardly twice. At that point I was very furious already. Like excuse me who are you to smack me so hardly, do I even know you. Okay I brush it off & handed him my ticket. He asked for my card so I handed him my bus card too. Upon inspection he shouted your card expired already why you still use.

At that point I was very lost as I didn’t know it had expired & I’ve been using it all along & topping it up daily. Guess what that barbarian told me, he asked me to pay a penalty fine of $50 on the spot. I was furious I screamed at him saying wtf, why I honestly didn’t know that my card has expired. He was forcing me to make payment on the spot or demanding for my particulars so he could fine me. My friend was still on the line she heard everything. As i did make quite a scene as I was very shocked & offended, the other passengers were looking on. That barbarian has the cheek to go tell them I’m not condemning her as you can see she’s being unreasonable. Excuse me who’s being unreasonable & obviously you are condemning me. I’m thankful for the adults present on the bus for helping me.

Telling that barbarian that he could have just asked me to pay the adult fare instead of forcing me to pay $50 on the spot. But that barbarian was too stubborn and told them it’s not their problem & continue to demand for my particulars and wants me to pay the $50 fine . So I shouted at him straight that he has no rights to demand for my particulars, he doesn’t have the authority to ask for it. So I asked him does he want me to call the police. At that point he took my card & went down to make noise to the driver. Thinking that he will have to return my bus card sooner or later so I just went back to talking to my worried friend.

After a while the bus stopped moving feeling something is amiss. I took a look to notice that barbarian has asked everyone to exit the bus & locked me up in the bus. I was very furious, I was late for school already due to his nonsense. I went down & demanded to leave so I can faster rush to school as today we are having lessons on our upcoming examinations which is really important. Bloody barbarian die die wants me to pay $50 or I can’t leave. I swear i was at the brink of going crazy & killing him. I kept cursing cuz I really need to be in school to attend lessons.

So the police came & attended to this issue, bloody barbarian lied to the police saying I was violent & wanted to attack him infront of my face. Wtf he was the one threatening me & being violent which cause me to protect myself against him. Thanks to this barbarian I was late for school for 2 hours and missing 2 hours of important lecture. So SBS is this they way you train your inspectors, asking them to threaten students, demanding them to pay $50 on the spot for not being aware that your card has expired. The way he approach bus passengers can be aggressive & he can lay hands on the passengers.

I demand a apology & compensation from your officer SHAHRUDDIN MOHD. No way am I going to pay a fine after your barbaric inspector smack me twice & threaten me to pay $50 on the spot to the extend of locking me up in the bus & causing me to miss 2 hours of my examination lecture. Tried calling your hotline but you didn’t pick up. So fine this goes on social media to let others see how horrid your inspectors are to passengers. I’ll kindly appreciate that you get back to me ASAP regarding this issue. My family is furious that I missed 2 hours of my class & your officer for laying his hands on me & threatening me.

I strongly suggest a punishment or suspension for your transport inspector SHAHRUDDIN MOHD for him to know its wrong to lay hands on passengers or threatening them to the extend of locking the passenger up in the bus & still has the cheek to lie. For future bus passengers do take note of this person.”