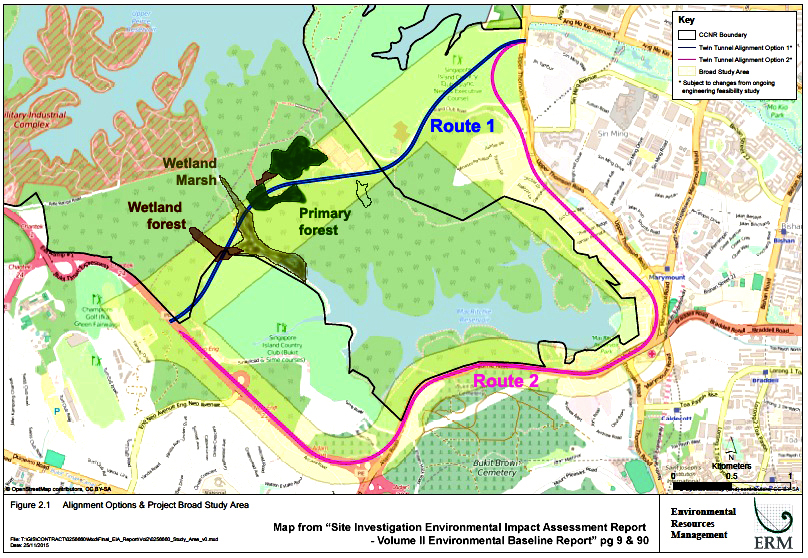 RONALD LEE: You can be forgiven if you haven’t read the full 1000-page report, “Environmental Impact Assessment on Central Catchment Nature Reserve for the Proposed Cross Island Line”. It sounds like a group of engineers went to an Upper Thomson Rd kopitiam, had too many Tigers and wrote down their talk cock sing song session.

In other words, a lot of engineering jargon which many people who aren’t engineers wouldn’t be able to understand. And it’s a 1000 pages of detailed consideration into the feasibility of building the Cross-Island Line under MacRitchie Reservoir.

What’s more prominent has been the cries of environmental groups, especially those clamouring for the LTA to push the tunnel around Lornie Road and Upper Thomson rather than straight through MacRitchie Reservoir. Doing so, they say, will save Mother Nature, and hundreds of species of animal and plant life.

But these environmentalists are missing the forest for the trees, overused but very relevant wordplay here, as you will see.

Cost to the Environment: Global Warming 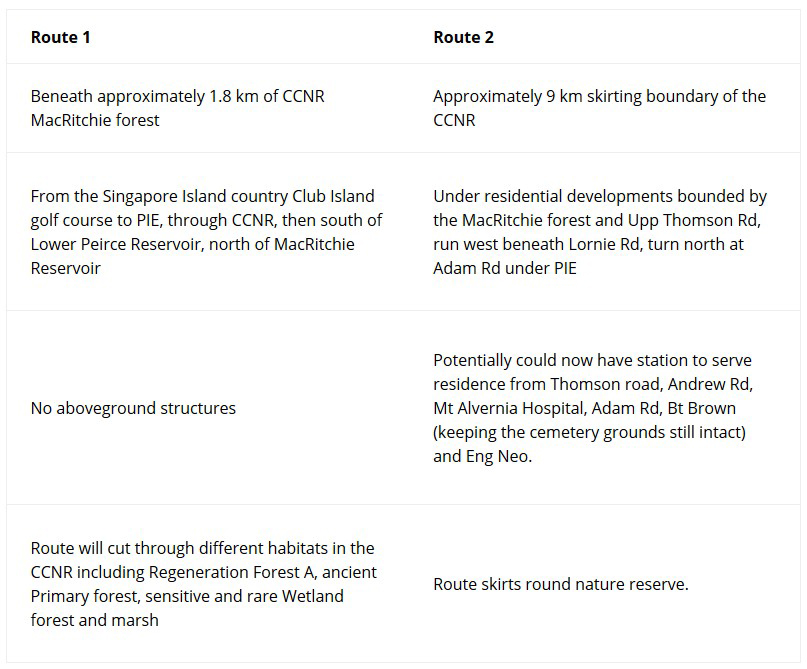 If the track were to skirt Lornie and Upper Thomson, it’d be 4 times as long as it going straight through the nature reserve. That means more power is needed to drive the trains, and the overall infrastructure of the tunnels. We’ll leave a larger carbon footprint because of this.

Taking travel time into account, we’re looking at about 600 trips a day, up and down the line, and overall about 200,000 trips per year. Considering the additional distance the train has to travel, how much more CO2 emissions will the system produce?

CO2 is the greenhouse gas blamed for global warming and the possible destruction of the world if scientists are to be believed.

Now take that and imagine SG100 – in the long term, will we be hurting the environment even more?

Somehow, the environmentalists skimmed over this very crucial aspect, which is why I mentioned they’re missing the forest for the trees – a short-term solution which would yield potentially more destruction come SG100.

No, the Reserve Won’t be Destroyed 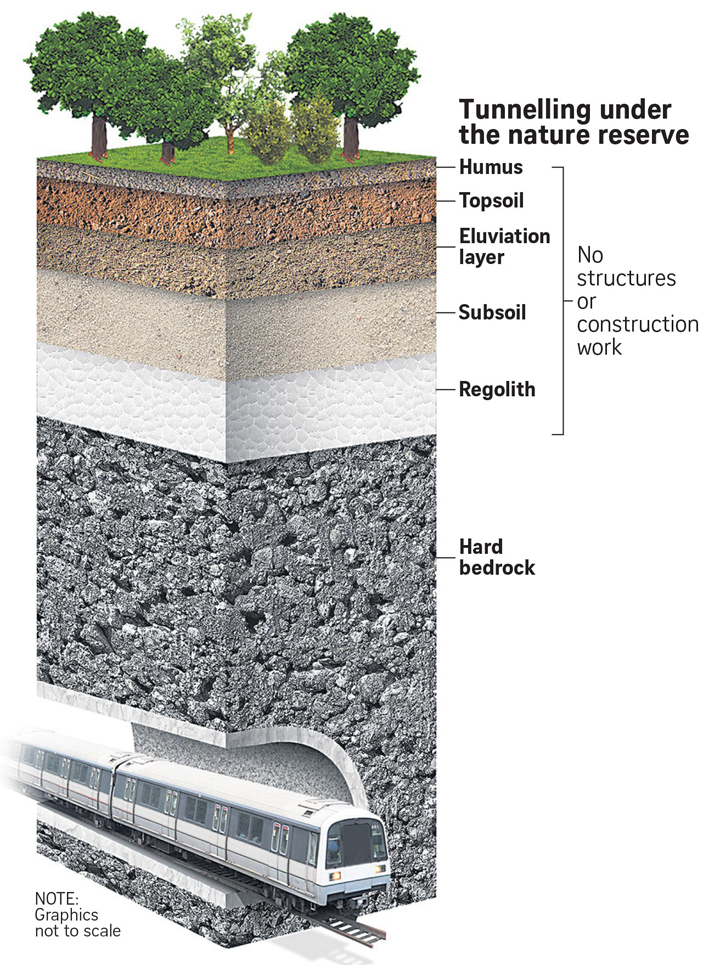 Some erroneously believe that the line will have overland structures. No, it won’t. And the tunnelling will be done 40m below ground, such that it goes even below natural groundwater. Yes, that’s a very long escalator ride down if you get to hop on it.

The problem here lies in digging. The nature reserve is home to 413 species of plants, 218 species of birds, 30 mammals, 24 freshwater fish species, and 17 species of amphibians. There’s definitely going to be some destruction, and that’s not a good thing at all. But we’re not looking at digging up a whole nature reserve. Rather, a short stretch through it that will be restored.

Hopefully, the Environment Ministry and animal groups can do pre-emptive preservation to ensure the survival of affected species that could be endangered.

Killing off the Elderly

Now this is a contentious point. If you’re a Prata House prata lover, take a walk around the Yew Lian Park, Thomson Ridge area. You’ll see a lot of old people. A hell lot of them. These aren’t your rich 6th Avenue people. The estates are old estates – over 30 years old, and many are first owners of the houses there. I thought I’d talk to some of the residents one day after prata regarding the issue of possibly losing their homes.

All of them said they’re not budging because they have lived there for almost half a lifetime, even if you give them a fat pay cheque- that’s the sentiment. So, it looks like the government will have to kill them off if it wants to seize their land. I don’t know how anyone who wouldn’t hurt a fly can look these people in the eye and snatch their stuff.

And, of course, there’s the destruction of a town centre that has been touted as the next Holland Village.

I’m glad I’m not their MP, Chong Kee Hiong, because this is a really damn hiong situation to be stuck in.

Elderly welfare and animal welfare both tug at our heart strings, so what then?

What else is going on right now at Thomson? The Thomson-East Coast Line, and any skirting of the CRL along Lornie Rd looks like its going to bring on duplication of train stations. Not to mention, there’s the Circle Line there. Seeing how the area isn’t an interchange, having 3 lines intersect and travel the same stretch doesn’t make sense.

And for commuters, would you be prepared to bear additional costs for such a service?

Not to mention, there will be aboveground structures for this alternative route, possibly because it’s 4 times longer and the system needs to let off steam. You’ll be getting more ugly, waste-of-space aboveground structure, causing an irreparable eyesore on our landscape (unlike London hole-in-the-ground stations, Singapore train structure are hideous monstrosities.) 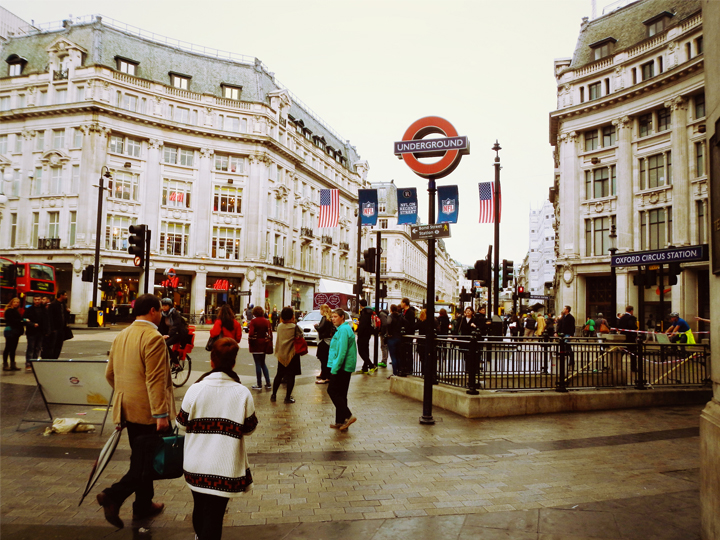 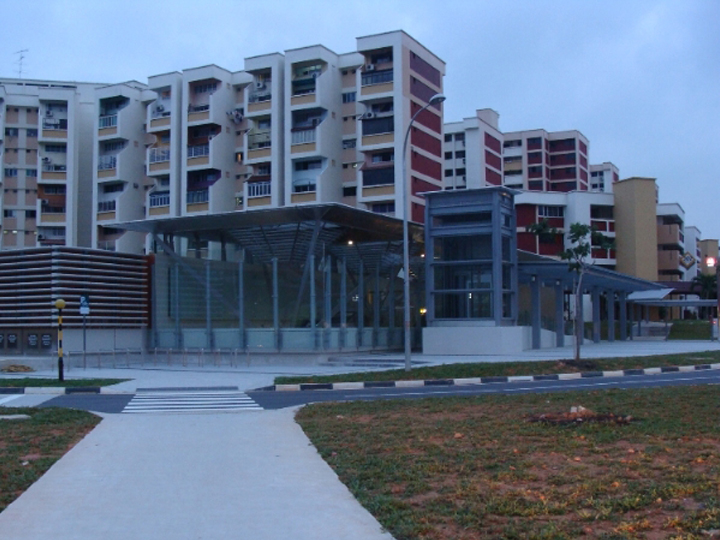 It’s going to cost more, yes. But the question now isn’t whether the government is trying to save money and undercut Mother Nature. Rather, is it worth paying S$2 billion more – half the cost of building the MCE – for all the problems mentioned above? What would you do if you were the LTA?

If you said “mai sua lah, then don’t build”, Punggol residents are going to slap you because you’re resigning them to a 40 minute bus trip to town instead of a 15 minute train ride. You don’t want to mess with people who live already in hell on earth.

Every group, the LTA, the environmentalists, the government-bashers, the ball-carriers – everyone is raising their voice based on their inherent agendas, and rightly so because this is a civil society.

We can debate on everything else under the sun, except for engineering expertise which is the domain of those drunken engineers and their incomprehensible engineer-speak.

For now, I hope they will put their expertise to use and find a another way to solve the problem without subjecting Mother Nature to trauma.

But if there is not other way except for the two alternatives given, would you choose the Route 1 alternative which gives short term problems which are solvable over time, or the other option which would put short term relief over destruction to Man and Nature over the long run?