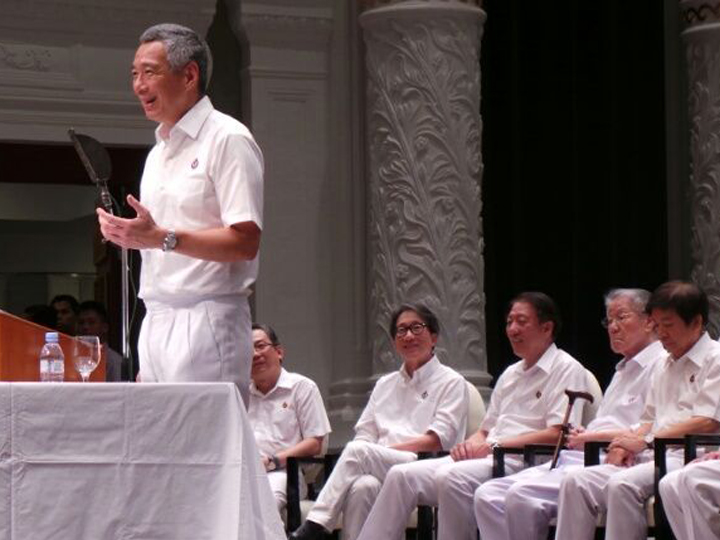 XUYUN: PAP fails if Singapore fails without PAP. Singapore will fail without the PAP.

Who put that idea into us and turned it into a self fulfilling prophecy? And if we believe that scenario, Singapore would certainly fail. Because we would resign to our fate and stop exploring other alternatives to succeed apart from the PAP-format.

It would be a dent to the pride which is boosted by the likes of our Gardens by the Bay, Marina Bay and F1, to see beyond these glamour which Hsien Loong is so proud of, are nothing but a skindeep definition of “success”.

Because a country, after coming through 50 years of nation building of supposedly solid foundations, cannot wean off its dependence on a mere political party, cannot be deemed a “success”. It only raises serious questions about (1)the foundations of our country, (2)the strength of our citizenry and (3)PAP’s deliberate creation of a nation which allows PAP to grow into every ounce of our nation’s flesh, so much so that the two merged into one. If PAP has become an inseparable entity with our nation, that only exposes a few things:

1) Weak fundamentals of our nation

PAP claims, our nation cannot withstand the change of political parties. PAP, for all the credit it has claimed for our nation-building, failed to build a sound and independent foundation for our nation that can stand on its own. On the contrary, it has produced a weakling that is entirely reliant on PAP, a political party. PAP is the crutch that it has built itself into, which Singapore will be forever reliant on it. If that is really the case, it explains the need for PAP to propagate the threat idea that Singapore cannot do without PAP.

If Singapore was to collapse without that crutch, wouldn’t it make sense to endure the short term pain of removing that crutch which hinders our nation to learn to stand on its own? A child will never be able to learn to stand, walk and run on his own if he is forever reliant on a crutch. The same logic applies to our nation. Unless you do not aspire to walk on your own.

PAP’s propaganda also betrays the unsustainability of our country. No doubt we need leaders with vision (I am not talking about a leader who can only envision how much of GDP growth–that is not a vision) to navigate Singapore Boat in the right direction, however, if the Boat has been built with strong elements to sustain storms and challenging waters, then even in the absence of the previous captain, the Boat should not sink. It will sink if the building materials are of inferior quality. The Boat might sail in a different direction but that may not be necessarily a bad move. With a dedicated crew, that is, our people, we can help the new captain to keep the Boat afloat. This brings us to the next issue.

There are crew on board the Singapore Boat. The captain cannot hold the boat all on his own. This appears to be missing from the dimension of PAP’s claim.

Having a strong, dedicated crew, that is our people, on board helps to assuage the impact of the absence of a capable captain. Nations cannot be strong with a weak citizenry. The smartest captain on board will be rendered ineffective without capable crewmen. This is the dimension that is conveniently missing from PAP’s claim. We have never realized that it is not a mere political party that makes a country strong–it is the people.

For all the compliments that PAP heaped upon itself, it is simultaneously and indirectly humiliating Singaporeans. That we lack the talents, the competency, the far-sightedness, the strength to lead our country, only THE PAP can do so. Do you get the message? We are the wretched souls awaiting for their saviour. Without PAP, we are rubbish.

Did PAP fail to invest appropriately in our people, the only natural resource that our nation has?

3) Failure of our education

If our people are that ineffective, incapable, what went wrong along those years of nation building? It wasn’t a matter of five years but FIFTY SOLID years! What went wrong with the education which parents and the country have both invested heavily in?

It contradicts the global rankings of our tertiary education when PAP finds us not good enough. What is the good of excelling in the international Olympiad Maths when the products of our education are deemed inferior to those of South East Asia’s or North Asia’s?

Have we been educated in the wrong direction? Or have we been forced to accept an inferior local education? How did our international rankings manage to score high?

Could it be that those who have helped to improve our education global rankings are foreign imports? If so, does that not say that PAP has not invested sufficiently on our very own people? Or that they have given up even on investing on us?

When words and actions contradict one another, there must be hidden lies.

We have good education and yet we need “foreign talents” to support our country. There must be reasons beyond the incapability of our people. They have not be forthcoming about this issue. SEA and NA foreigners have been welcomed onto our shores to replace our highly educated people. It implies the futility of our people pursuing a tertiary education at all cost.

4) The strangle on our people

For all the insults PAP has heaped onto us, such as lazy, dafts, be trained like dogs, choosey, uninnovative etc, did you ever pause to think what was the cause of the “failures” which we have been rightly or wrongly accused of?

We are cultivated since young to pursue higher education, as the salary scale of the civil service says so, an indirect admission of despise on the lower educated and the kinds of jobs associated with it. Manual jobs bear the brunt of distaste. It would never come across to us the unique skills a plumber holds. Instead, we judge on his low education and label him as a failure. We can never understand why would Europeans pay so much for manual jobs which Singaporeans shun. Likewise, we can never understand why a British plumber or a construction worker can hold his head high as compared to their counterparts in Singapore?

Where did such kind of values stem from? Most of our forefathers started off as manual workers. Did we use to despise them?

We accepted readily the low wages of manual labour and justified the high salaries of a handful of professions. We didn’t question the rationale. And we didn’t fight to improve wages for the low-income to rise in tantrum with living cost. Instead, we looked away when real income of low wage workers falls. Who should we blame when we refused to take up such jobs? Ourselves or the kind of values bred in our society?

We accepted that it is “punishable” to be single; to be non-tertiary educated; to be a manual worker; to be poor; to protest in the public; to strike for unfair treatment…..

There is only one right perspective for everything. We did not realize all our acceptance of certain “values” was actually achieved/cultivated through social engineering. Through the means of carrots and sticks. The “values” of our society are dictated and executed. The pay scale of civil service penalizes non-tertiary educated; housing policy is linked to family planning; size of family is linked to fines; protesters and people who strike are arrested etc that influenced the types of values that we choose to uphold.

Democracy has to be evil; protests have to be a demon; social welfare will only head towards wreckage. Did anyone tell you that Germany has a higher social welfare than the UK and its country is not even close to the brink of collapse?

A highly-educated nation but with dismal thinking ability.

We think in one direction. Whatever PAP decrees is the truth, the alternatives got to be lies. If you cannot turn left, you got to turn to the right. Can we not walk straight on? Or create another path ourselves between the left and the right?

Who is strangling our people? And killing the thinking ability of our people silently.

Conclusion–It is about the people!

Whatever the ruling regime may spin say or advocate, we got to rely on ourselves. Otherwise, we will be losers, forever under the paternal care of PAP and there will never come a day when we will learn to walk on our own feet. PAP has no intention to let us walk on our own with the strangle it holds in all aspects of our life. Media, national education, transport, healthcare, political arena etc. Even public housing has to be linked with marital status. And no one thinks that it is wrong. And that is the wrong.

Ultimately, it is not whether PAP can take Singapore into the next lap, but whether we, as a people, can rebuild our country’s foundations in the right way that can withstand the change of political parties and political figures.

Our nation must outlive the short-lived political parties and human life span, if it aspires to be a strong nation.

If Singapore would fail without PAP, then it is PAP which has failed us. Failed to build a truly strong nation manned by a strong people. Instead, what we see is a glamourous but empty shell.

Stop pondering whether Singapore can do without PAP. Move on. Grow ourselves in order to grow our nation.

This commentary was written by Xuyun and first published on Transitional Eternity.
Send us your commentaries at mail@redwiretimes.com
Find us on Facebook! https://www.facebook.com/redwire.singapore