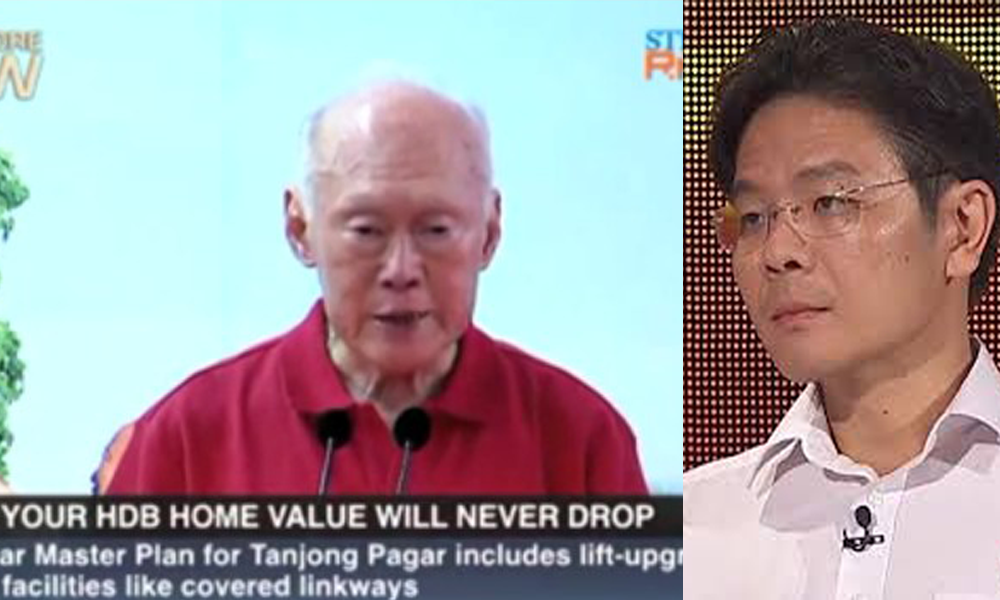 Is your HDB flat a ticking time-bomb or a nest egg?

Sorry, we aren’t sure either as the government continues to flip-flop on the value of public housing.

Common knowledge indicates that once a housing unit reaches the end of its lease, it gets re-acquired by the state.

But Singapore’s late, esteemed former prime minister, Lee Kuan Yew, promised Singaporeans that the value of HDB flats will never fall – he even propagated it on live television.

So what are we to believe?

Then, National Development Minister Lawrence Wong issued a timely reminder to Singaporeans last year that yes, your HDB flat value will fall, and by 99 years it will be worthless.

“As the leases run down, especially towards the tail-end, the flat prices will come down correspondingly.”

Speaking about the value of HDB flats at a REACH forum yesterday, he said:

“There is a high likelihood that over a period of time, if the economy does well, if incomes rise, then property values will appreciate together with the fundamentals of the economy, and your stake in the nation – your home – can also appreciate in value.”

What a flip-flop- once again, Wong appears to be giving Singaporeans hope that there is some value to their HDB flats at the end of the flats’ lease.

Maybe Wong changed his tune because of the announcement of VERS – essentially an en bloc version of the lease buyback scheme where the government gives the elderly who sell their units back to the state a small sum of compensation.

But, the government has said that response to the lease buy-back scheme has been lacklustre, so what’s the likelihood of VERS faring any better?

And if the government is going to dangle a giant carrot in front of owners to entice them to collectively sell their 70-year-old flats back to the state, then they might as well just call it SERS.

In other words, it looks like the government is simply kicking the can down the road while calling it a gold nugget.

Ahead of a likely election year.