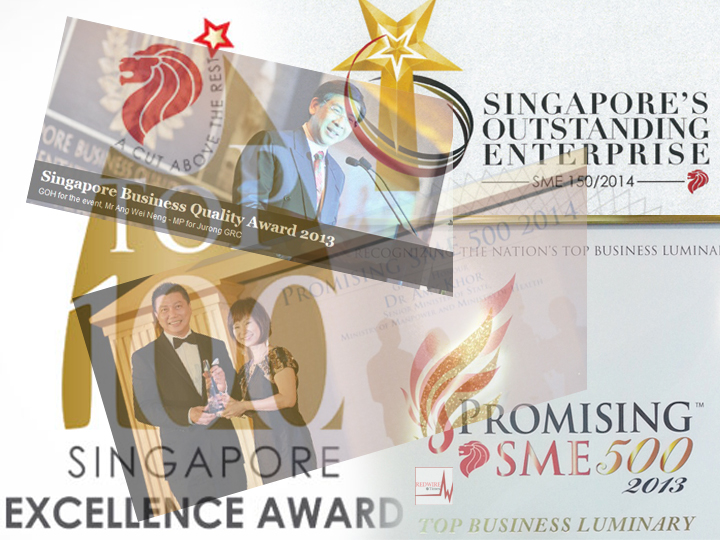 “We are a legitimate business, not a scam,” says Mr Alex Yeo, the chief executive of the Singapore Enrich Group.

SEG is the biggest player in the unregulated business of creating and handing out “industry” awards.

These awards are not handed out by industry associations or endorsed by government bodies.

Instead, they are created by private firms.

In the past four years, at least seven MPs have attended dinners organised by SEG, in which they give out the awards.

Some have accused the company of being a “scam”.

This is artist Paul Lee’s account of his experience with SEG:

“Beware of this business scam using dubious Award to deceive you into believing that you have been nominated and won an Award. My recent encounter with a company named Singapore Enrich Group Pte Ltd has been an alarm to me that many SMEs (Small Medium Enterprises) might possibility being the victim of this scam Awards. I would like to share this story and alert the business community, members of parliament, and entrepreneurs to beware and report to police accordingly.

The story began when I received a call on Friday, May 8, 2015, and notificed me that my company UniqArts and Technologies has been nominated as TOP 100 companies as Singapore Excellence Award. This call is from a senior project officer from:

The officer came to my office on May 11 (Monday) to present this “good news” and I just need to pay S$6,000/= dollars to receive it, together with advertisement at the SMRT Train, Gala Dinner and Award to be given by Member of Parliament. Without a doubt, I agreed and signed this “scam contract”. Indeed, I checked their web site and there are video showing award ceremony, especially when Members of Parliament were there such as Dr. Lim Wee Kiak, MP of Nee Soon GRC; Ellen Lee Geck Hoon, MP Sembawang GRC, etc. They also use Singapore Merlion head symbol for the award certificate to reinforce the national award identity. But it is too good to be true…

However, questions and doubt started to surface after their aggressiveness to collect the full payment (with GST) and they will do it on May 14 (Thur). In addition, I found out that a tuition center next to my office has a similar Award! When we said we want to cancel, they said we need to pay 50% of the S$6,000/=. The true This term was listed in small print behind the Contract but I was not notified about this small clause in this first place. This sounds even more suspicious that I fell into a scam.”

Companies pay between S$5,000 to $15,000 to have their businesses featured in a journal and to attend a dinner if they accept an award.

According to SEG, the company is a “Publishing and Media Consultancy which recognizes Small Medium Enterprises’ (SMEs) and entrepreneurs’ success in communication product quality, services and brand goodwill to general consumers and clients.”

Nowhere on its website does SEG indicate that it is endorsed by government bodies.

But Mr Yeo has defended his business, saying that award “winners” knew they were paying for publicity.

The 45-year- old former dishwasher turned businessman said: “I overcame difficulties to achieve (business) success, so I can inspire others.”

He said, “If I was running a scam, I would not have more than 500 companies supporting me since I started the business.”

Mr Yeo said that having MPs hand out awards at dinners was part of networking.

In the past five years, the unregulated business of creating and handing out such “industry” awards has spiked and now at least five firms are vying for a slice of the pie.

Complaints about companies have surfaced as early as 2012. 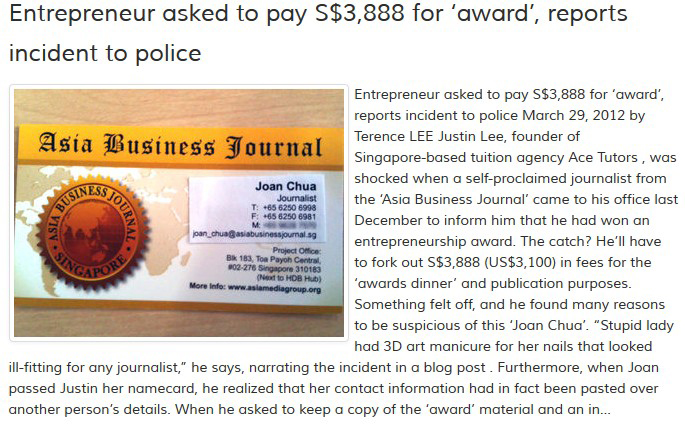 The “Association” is actually an advertising company set up in 2010 with a paid-up capital of just S$1.

Prior to its name change in 2012, it was known as Asia’s Corporate Regulatory Alliance.

The firm has given out Singapore’s Outstanding Enterprise Award to 529 firms, out of which more than 15 are moneylenders.

The rest include spas, car workshops and maid agencies.

Amongst MPs who are given out awards at its dinners are Dr Lily Neo and Dr Chia Shi-Lu.

Only one private firm appears to have the endorsement of an actual registered association.

It has the backing of the Small Medium Business Association – which shares the same Toa Payoh factory building address as the PR company.

Priscilla Tan, the spokesman for the Small Medium Business Association, is also a shareholder in Promising SME 500. 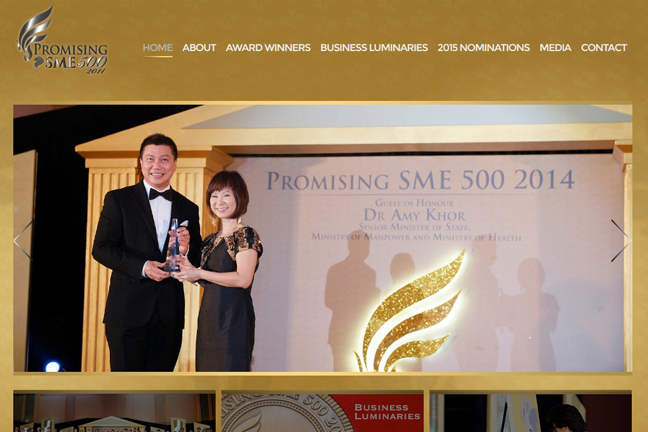 SPRING Singapore has warned companies to conduct checks before accepting any awards.

The National Heritage Board, which regulates the use of the lion head logo, says it can be used by individuals and firms, but must not be used “to create an impression that the State or the Government is endorsing any goods or service”.