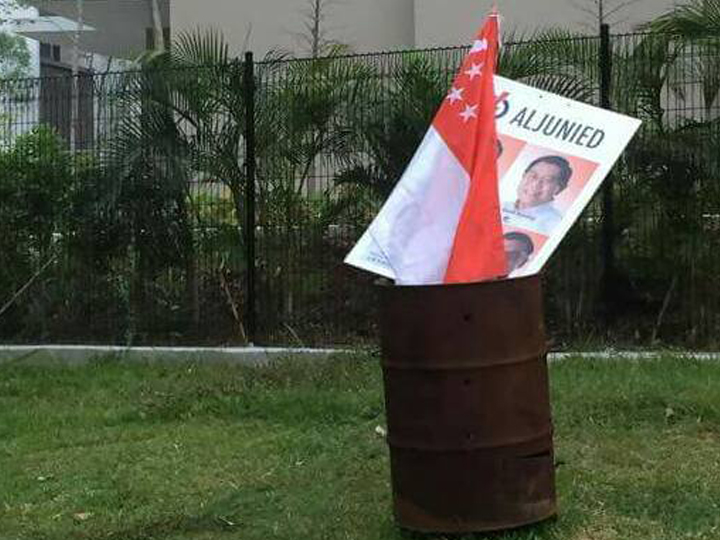 Gone to the dogs – sunk to the lowest possible quality or character.

The latest in the list of political mischief – our national flag thrown into an incense burner together with a poster of the PAP’s candidates for Aljunied GRC, Victor Lye and co.

This appears to be the lowest ebb of mischief so far, after photos showing the defacing of posters bearing the images of PAP and opposition politicians alike.

Calls have been made by both the Whites and the rest to refrain from destructive politics, so it appears that some prefer to exercise their destructive nature on inanimate objects that cannot take them to court. 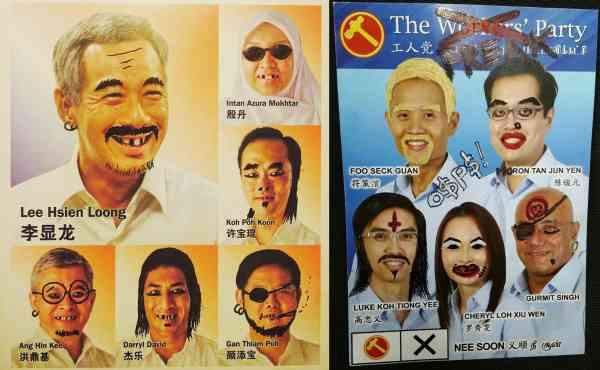 The trashing of the state flag picture picture was posted on Mr Lye’s Facebook page.

It’s unclear if it was set fire to later on, or if the whole setup was staged, but let’s give Singaporeans the benefit of the doubt.

Some even say “maybe the Bangla cleaner did it lah”, which is quite unlikely considering an important part of our foreign cleaner friends’ job is knowing what a rubbish bin look like so they can actual trash in it.

Sadly, while Singaporeans the extreme act has received much condemnation, the whole notion of whether it was staged has sparked a war of words, with PAP and opposition supporters both accusing the other side of unpatriotic behaviour.

With less than a week left to the polls, perhaps its time to focus on the policies laid out by each parties, and to listen to what candidates have to say about their plans should they triumph in their constituencies.

That effort will pay off much better than trickery or temporary insanity.