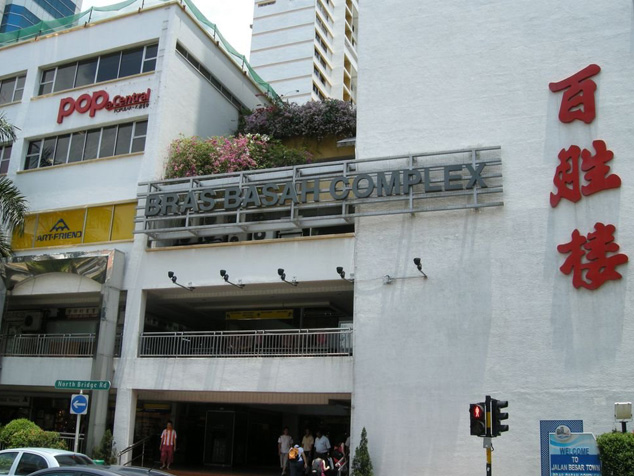 The Chinese media reported recently that an upgrading project at Bras Basah Complex has stalled and the business owners there are frustrated with the numerous delays that have affected their business.

HDB, however, denied that upgrading work has completely stopped, claiming instead that it is merely “reviewing” the scope of the project.

The 34-year-old Bras Basah Complex was included in HDB’s Revitalisation of Shops Scheme (ROS) 5 years ago. Under the scheme, HDB was supposed to help retailers upgrade the shopping environment and carry out promotions.

The ROS scheme has 3 components: co-funding for upgrading of common area, co-funding for promotional events and rent-free periods for tenants to renovate their shops.

At the time, it was reported that the upgrading project would start progressively from 2010. The scope of work included the relocation of the air conditioning compressors, design of a landmark, facelift of the building’s facade and other works so as to build a more comfortable and convenient shopping experience at Bras Basah Complex.

However, the shop owners interviewed claimed that the first phase of the upgrading project was delayed and work only commenced last year. To date, it has only completed the refurbishment of the facade and the toilets. The second phase – widely regarded as “the most critical” – has yet to start. Shockingly, 3 months ago, news started to circulate that the project had stalled.

According to the shop owners, the scope of work affected includes the originally planned installation of a central air-conditioning system on the roof of the 5th floor, 2 skylight sheltered passageways in the courtyard and a fire resistant stairway at the complex’s main entrance leading to the 2nd and 4th floors.

Mr Kwek Boon Watt, chairman of the Bras Basah Complex Merchants’ Association, told the media that the stalling is partly due to a rise in material cost which exceeded the budget.

Bras Basah Complex is located in Moulmein Kallang GRC, and its MP, Denise Phua, has confirmed with the media that due to an increase in construction cost, the next phase of the project has met challenges. At the behest of the Merchants Association, she has reflected the concerns to HDB and met with both parties.

HDB has responded to media enquiries, without touching on the specific phase of the project being affected. HDB stressed that the upgrading work has not stalled and they are currently reviewing the project’s scope of work that has deviated from the budget. This review is expected to be completed in the first half of next year, HDB said.

Contrary to what HDB said, a number of shop owners revealed that HDB proposed to stop the project and refund their payment. But most of the shop owners rejected HDB’s proposal.

Bras Basah Complex has 141 shop units, out of which 99 units are privately owned, while the rest of the 42 units are rented out by HDB. According to the shop owners, HDB was supposed to bear half of the upgrading cost for privately owned units and the full cost for the HDB-owned units.

He said, “Bras Basah Complex is dilapidated, and in need of refurbishment to beautify and look neat so as to attract the customers back. If there is a shortage of fund, we can think of a solution. Since it has been agreed, how can they (HDB) suddenly backtrack?”

An owner of a bookshop who wanted to remain anonymous said, “We thought that it will be alright after tolerating it (upgrading work) for a while but we never expected the authority to suddenly stop the project. The amount to be refunded can hardly compensate for the loss of our business. Of course, we do not want to be refunded.”

Grouses from quality of phase one work

Besides the delay in the second phase of the project, the quality of the work in the first phase leaves much to be desired.

One of the shop owners claimed that the newly installed lighting on the exterior wall of the complex is “faulty every other day”. As a result, light is not able to project properly. Till now, the issue has not been resolved and it raises concerns over the contractor’s standard of work.

It is not known who the contractor is.

HDB, on the other hand, said that under the ROS scheme, it is the responsibility of the merchants to set up a working committee to develop the scope of upgrading work and the content of the promotional activities. Once the project and budget for it were approved by HDB, the committee should call for a tender and supervise the work. The responsibility of HDB was merely to provide secretariat and funding support.

HDB further asserted that, after Bras Basah Complex was selected to join the program in 2009, it had collaborated with the working committee set up by the shop owners for the upgrading project. However, an ex-committee member of the Merchant Association retorted that the tender of the project was never handled by the working committee. It was, in fact, entirely handled by HDB.

Shop owner Mr Liang told the media that all the shop owners were very happy when they first heard the news that Bras Basah Complex had been selected for upgrading.

He said, “Many of them had to take up bank loans to support the upgrading project. But now, there is no sign of the completion date… It has been all too amusing.”

A HDB spokesman claims that HDB understands the anxieties of the shop owners but it is seeking their understanding. “We will try our best to manage their feedback and work hard to complete the upgrading project,” he said.

After collecting the co-payment sum for the upgrading project from the shop owners of Bras Basah Complex, does HDB not have a moral obligation to complete the project?

It will be detrimental to the reputation of the “clean and efficient” PAP government if HDB now backtracks on the deal by stopping the upgrading work and refunding the shop owners. A shop owner said they have been suffering business losses ever since the upgrading project was announced 5 years ago. Who is responsible for these business losses?

Will this incident cause an erosion of the public’s confidence in government agencies and Minister Khaw Boon Wan since he is the National Development Minister overseeing HDB?

This story was first published on TR Emeritus.
Send us your stories at mail@redwiretimes.com