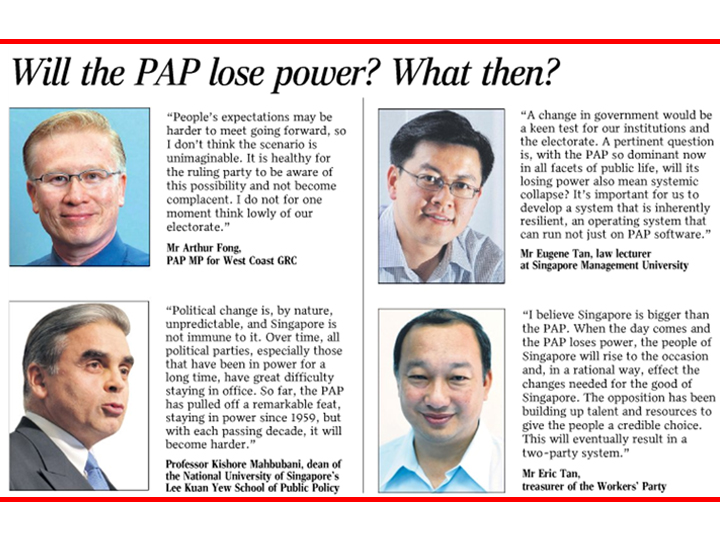 JL: In an article published on 14th May, the mainstream media highlighted the predictions of 2 research firms on the next general elections. Both studies have suggested that the PAP will do well in the next general elections, which they predict to come sooner than later. My prediction is quite the opposite, that the PAP will do even worse that before with the possible loss of anywhere from 1 to 4 GRCs.

As illustrated in 2012, face-to-face political surveys may be met with scepticism by residents who may not reveal their true views; the mainstream media wrongly predicted that PAP would have no issues winning back Punggol East in the by-election. Secondly, the sample size used by these research firms may not be adequate to reflect the population demographics.

One firm has has suggested that the government’s increased “social safety nets” will boost the PAPs vote share since they target “middle income and senior households that comprise the two most critical voter demographic groups” while another noted that they have “seen a steady improvement in community satisfaction that is now eight points higher than it was 12 months ago”.

While social safety nets have improved, the fact remains that this is incidental to most citizens since the citizen would be most likely to be concerned with bread-and-butter issues (i.e. costs of living) rather than something which does not directly impact them; in addition, the fact that the PGP was only introduced last year means that not everyone can see their benefits to cast a vote.

Moreover, the community satisfaction is subjective at best; while the PAP has successfully decreased housing prices, this is way beyond their affordability definition where the average house is 4 years of the median salary while transportation is still unsolved; other problems have exacerbated since GE2011, including excessive waits at the public hospitals and tension with foreigners.

The perception of PAP’s behaviour and reasoning has gotten much worse, especially seen in the recent degree mill saga. Rather than side with public perception which is generally negative, the PAP has attempted to take an accepting stance, saying that work experience will make up, conveniently ignoring the opportunity costs to our youths who lose out on opportunities.

Surely, just like the aftermath of GE2011, PAP ministers may find that the electorate’s perceptions of them is far worse than they thought.

This commentary was written by JL and first published on A Collection of Thoughts.
Send us your commentaries at mail@redwiretimes.com
Find us on Facebook! https://www.facebook.com/redwire.singapore