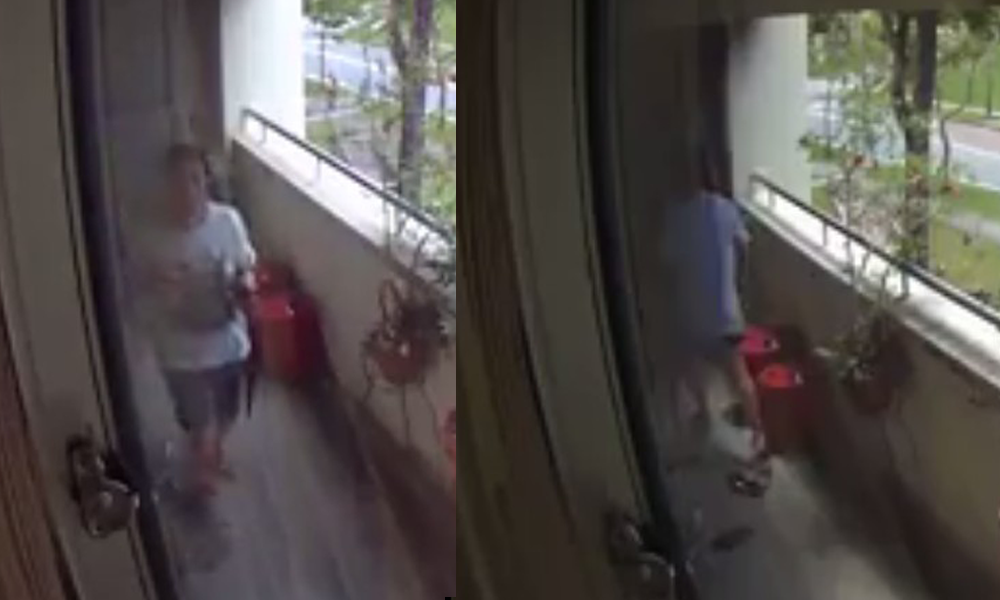 Strange neighbours don’t only come from Siao Lang Town (known to some as “Yishun”).

Not once, but many times over the years.

Footage from a CCTV installed by the frustrated show owner captured several instances since 2017 where the lady would, for no apparent reason, do battle with the shoes left along the corridor.

Shoes aside, the lady appears to bear ill-will towards her neighbour’s family, for reasons yet to be determined.

Said the neighbour, netizen “Aoi Yoshida”, who shared over 10 videos of the shoe attacks:

“My family and I have stayed in this unit since 1999 and we have been at peace with every neighbour in the block. Until this particular neighbour moved in some years later. My siblings and I was scolded “ccb” for no reason for the longest time since Primary 6 however back then we don’t understand. My parents kept quiet as they were working most of the time and did not want anything to happen to us as we did not know how to protect ourselves back then.

Things worsen recent years, my sister was preparing for her marriage, the red cloth that was prepared for their wedding was tugged down the moment this particular neighbour stepped out of the house. However, there was no evidence. We kept quiet.

There were events where our shoes “walked” by itself towards the staircase, she pointed middle finger, asking to fight my mom and I (sometimes my elder sis). We sought help from the nearest police station under our block as we fear for my mother safety.

No help was given until October 2nd 2017. My sis took off to accompany my mother who was alone at home. Decided to go to the market to “huat” herself to buy some 4d since it was her birthday. She was looking at her phone before she crossed the road. She heard “ccb” and looked up and see who was that and was scolded ” Kua simi lj” and was invited for a fight. Immediately she went to the police again.

Again nothing was done, went to the MP of Chua Chu Kang. At first they did visit and mention that this lady was not happy with the shoe rack that was placed outside my flat. We decided to move the rack and our shoe still fly by itself, we felt that moving the rack wasn’t necessary so we moved the rack back.

My family and I decided to install CTV as advised by the police.”

However, Aoi said that despite providing CCTV footage, the police said there was “nothing they can do”.

Aoi has urged her friends and neighbours to help look out for her mother who is “alone at home most of the time” with her daughters.