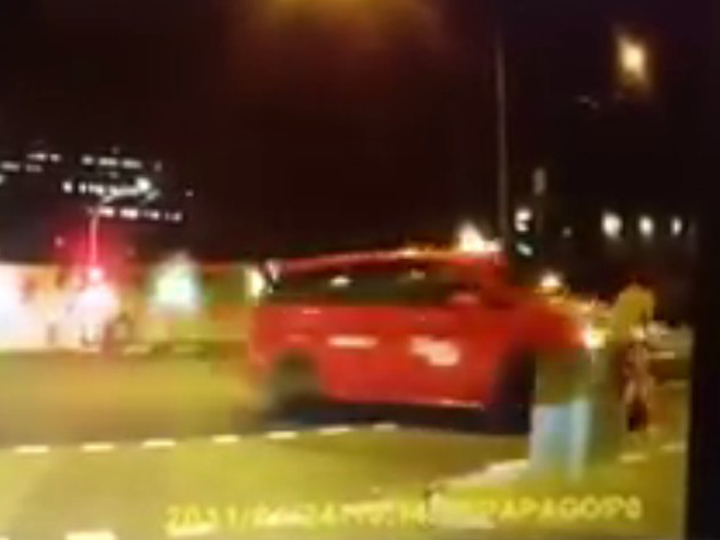 A taxi driver who knocked down a female jogger in Bukit Merah 3 days ago (6 Jul) has been nabbed.

Jogger Elise Teo says she received a call from TransCab, saying that the taxi driver has been identified, and that he was very sorry for the incident.

Teo says she was informed that the taxi driver didn’t know he had hit somebody.

However, Teo says she doubts the taxi driver was unaware as she was in his direct line of sight.

The incident happened at Jalan Bukit Merah at about 8.15pm.

Teo was jogging across a junction, when a taxi driver making a right turn “ran over her”.

Teo was sent to hospital with a mild concussion and a bruised rib.

She says that the driver didn’t stop to lend her assistance, and instead fled the scene.

She has made a police report over the incident.

UPDATE: I received a call from TransCab to let me know that they have found the taxi driver. I was told that he was very apologetic but when the accident happened, he didn’t know that he’d hit someone. It was only after he realised that his side mirror was flipped that he thought maybe he had hit something/someone and he drove back to see what/who he’d hit.

To be honest, I’m not fully convinced because from the original video clip, the sound on impact was so loud, I honestly doubt that he wouldn’t have realised. That, is on top of the fact that I’m in his line of vision.

Nonetheless, I will be passing on his details and the original video clip to the traffic police and leave this matter in their hands. I will also be seeking compensation from TransCab. Whether or not TransCab will terminate his employment is still unclear at the moment.

But, thank you all for sharing this post. I’m very sure it helped to expedite the whole process of finding the taxi driver.

Got into an accident while jogging around my area. The green man was on and the red hunchback Trans Cab ran me over somehow. He didn’t stop or attempt to slow down and simply drove off. I’m just thankful that I was paying a little attention and wasn’t running faster than I was.

That said, I will find you (the driver). Because you’re irresponsible and didn’t bother to stop, I don’t think you should be allowed to drive at all.

I’m not sure if I’ll be able to retrieve the license plate from the video but if anyone’s around the area during that time and you saw anything, please let me know.

P/S: Thank you to the kind gentleman and lady who had offered assistance, appreciate it.

P/P/S: I’m typing this in the hospital with a mild concussion and a bruised rib but other than that, I’m fine (Yay!)