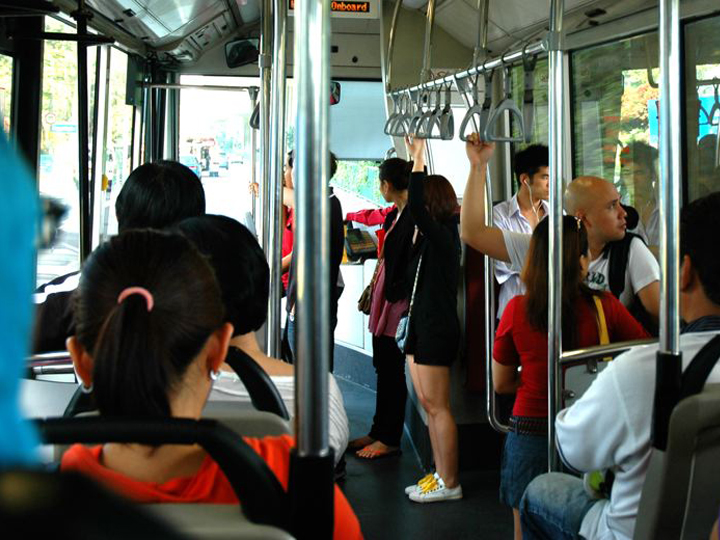 ESTHERGAL: A few days ago I am taking bus number XX. Along the Great World City, 2 Ang Moh board the bus.

The man had a baby hanging infront of him. The Ang Moh lady said excuse me to me. So I stand up from my right seat to let the Ang Moh man sit at the left sit facing the window.

Anyway it is not surprising to me as I encounter 1 similar case whereby the other time also involve Ang Moh.

That time another Ang Moh lady also said excuse me (she had no baby or anything), so I stand up to let the Ang Moh lady sit at the window seat. Guess what, she did not want to seat and tell her boyfriend “Next time we should take a TAXI”.

People is humble and courteous enough to take the effort to stand up to let this type of arrogant ang moh move in yet they indirectly humiliate the other party by acting arrogant and high class by not taking up the seat. They don’t like the sunlight at the window seat and they think I like it?

I can almost conclude one thing after this 2 incident, Ang Moh simply don’t like to sit at the window seat.

Perhaps they are too arrogant to move in. Ang Moh mentality thought they AMDK I need to give up my seat.

I stand up to let the bitch ang moh move in and if she don’t like it I just sit back at the outside seat. Of course I am not stupid enough to sit at the window seat for them.

Singaporean and asian more chin chai, they just move in and sit at the window seat no big deal to them. I wonder what is the big fuss this ang moh have against window seat.

Anyway to add on. At that time of the incident they are still plenty of other seats around.

Send us your letters, stories and commentaries at mail@redwiretimes.com
Find us on Facebook! https://www.facebook.com/redwire.singapore