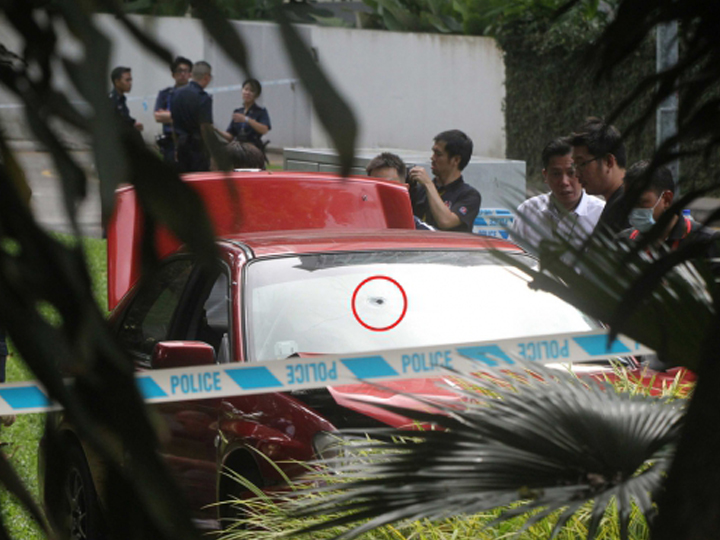 A woman has taken to Facebook to slam police for the death of her husband, who was slain by police after trying to ram his car through a police security checkpoint in an attempt to flee.

The woman, who goes by the moniker Fifi Divinez, said she is 2 months pregnant with the dead man’s child.

She justified her husband’s attempt to flee, saying he did so because he didn’t have a driving licence. 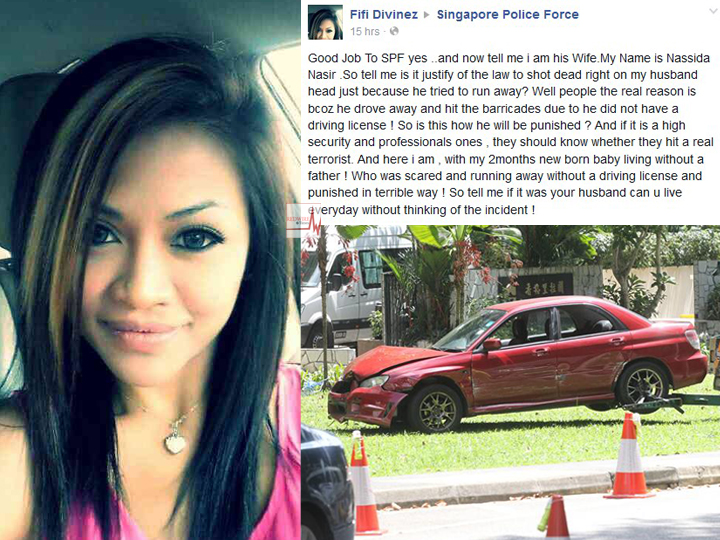 “Good Job To SPF yes ..and now tell me i am his Wife.My Name is Nassida Nasir .So tell me is it justify of the law to shot dead right on my husband head just because he tried to run away? Well people the real reason is bcoz he drove away and hit the barricades due to he did not have a driving license ! So is this how he will be punished ? And if it is a high security and professionals ones , they should know whether they hit a real terrorist. And here i am , with my 2months new born baby living without a father ! Who was scared and running away without a driving license and punished in terrible way ! So tell me if it was your husband can u live everyday without thinking of the incident!”

The shooting happened on Sunday morning (31 May) at Orange Grove road near to the Shangri-La Hotel,where a major security forum involving top defence delegates from across the world was being hosted.

The driver of the car, Mohamed Taufik Zahar, 34, crashed his vehicle, a red Subaru Impreza, through police barricades and was shot dead by police.

The car had a single bullet hole in the front windscreen.

It came to a stop on a grass patch barely 250m from the hotel entrance.

Mohamed Taufik was found to be wanted by police for failing to attend court for an offence of criminal intimidation.

He also had previous drug-related offences and criminal records.

His two passengers have been charged for drug trafficking, after 98g of heroin was found on them.

Following the shooting, netizens have stepped up to defend the police.

Some netizens, however, believe for various reasons that the police should not have opened fire. 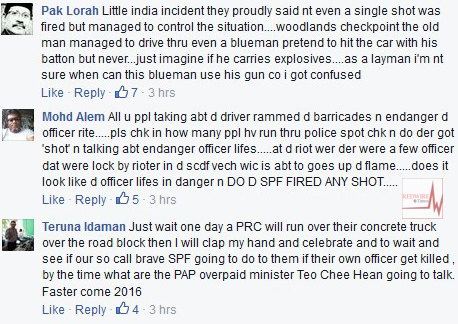 Two passengers in the car have been charged with drug trafficking.

Mohamed Ismail, 31, and Muhammad Syahid Mohamed Yasin, 26, were both charged with possessing three packets of heroin weighing approximately 9g in total, for the purpose of trafficking.