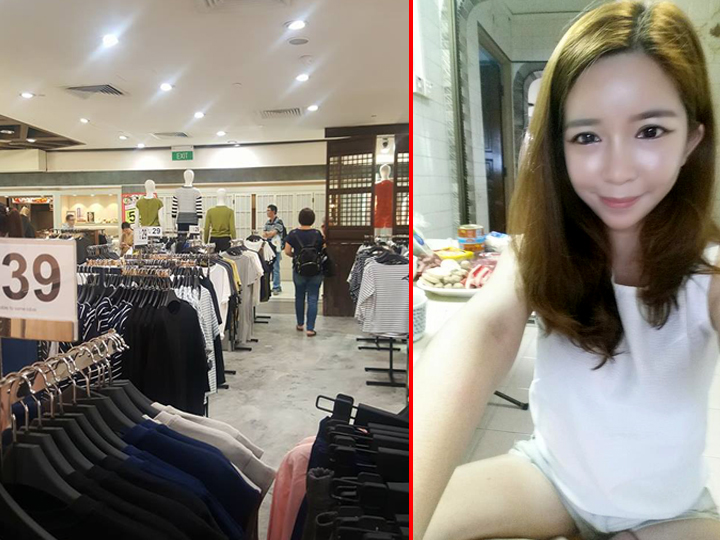 LEE LING: I have never once doubted the security of a changing room. However, I have come to realise that even in one of the safest countries in the world, our safety can be easily compromised.

On 2nd June, at about 8.20pm, I walked into a female apparel store at Liang Court. I found some clothes to try on and headed into the “For Ladies Only” changing room.

The curtains were thick and my area was secured as the curtains were fully drawn. I then proceeded to try on a few dresses. While I was changing, I heard a female voice asking me if everything was alright. I replied her that I was still trying on the clothes.

The last piece I tried on was a top. While I was trying on the top and clad only in my underwear, I suddenly heard the curtains being drawn back and saw a male staff putting his head into the changing room and staring right at me. I felt furious and shocked. I tried to cover myself up, and then shouted at him. That was when he closed the curtains.

I hastily changed back into my own clothes and came out of the changing room. I looked around and tried to look for a staff. I asked the first staff I saw if I could speak to their manager. She said their manager was out of the shop and asked why I was looking for the manager.

Apparently, no one realised that the male staff had opened my curtain! I was appalled while telling the two staffs. They questioned the male staff and he claimed that he said “Excuse me”, thought that there was no one and thus opened the curtains.

The manager appeared at that moment and heard both our recounts. She then stared at me, and after a really long pause said that she would relay this to her higher management. And that was all. I stood there appalled by her response. She did not once ask me if I was alright, nor did she ask me if she could assist in anything. Basically, she did not do anything at all to try to understand how I was feeling or rectify the situation!

She only asked me to speak to her management on the phone after the police was called in. I told her that I would speak to them when the police arrived. Subsequently, the police and the store’s HQ staff arrived, but no one from HQ acknowledged the incident, nor did they try to apologize or say that they would look into this matter.

1) I did not hear anyone said excuse me.

2) Why is a male staff in a “For Ladies Only” changing room? (This store does not even sell male apparel.)

3) According to the police, the male staff was deployed to work in the changing room area as they were understaffed that day.

5) And if so, why did he open my curtain and not ask a female staff to do so?

6) Why did the management not acknowledge the incident and kept mum?

7) Lastly, there was not a single CCTV in the changing area.

Growing up, I have associated changing rooms in Singapore to be “safe”. This is especially so when males are not allowed to enter the area and there are signs stating so.

I did not write this to slander the company or to malign anyone. What compelled me to share this is the belief that stores (especially so when you are a group with several stores) should not overlook security and should make it a priority to create a safe environment for their customers. If they do not have doors, they should have hooks to hook the curtains at the very least. And no matter how busy the store is, should a male staff be deployed in a for ladies only changing area?